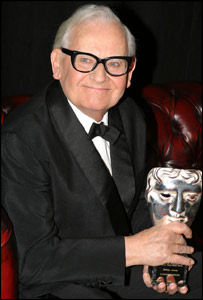 The man who brought the characters Norman Stanley Fletcher and Arkwright so warmly into hearts of so many died yesterday after a long period of heart trouble. Described as 'One of the most loved and respected comedy performers of his generation,' tributes have, not surprisingly, been pouring in.

Although he has not been on our screens of late undoubtedly he will always be fondly remembered as Porridge, Open All Hours and The Two Ronnies, which play out with their instantly recognisably warm humourous innocence that is all to rare today, recieve their deserved re-runs some 30 years on.

Ronnie Corbett led the tributes saying: "Ronnie was pure gold in triplicate - as a performer; a writer and a friend." He went on: "We worked together since 1965 and we never had a cross word. It was 40 years of harmonious joy, nothing but an absolute pleasure. I will miss him terribly."

David Jason, Barker's co-star for many years in Open All Hours, said: "He was a very dear friend and someone for whom I had the greatest respect.

John Cleese, who began his career with Barker on The Frost Report, said he was a "warm, friendly and encouraging presence" and "a great comic actor to learn from"

Cleese's Monty Python colleague Michael Palin said: "I can't think of anyone who knew how to play comedy better than Ronnie Barker and I count myself enormously fortunate to have known and worked with him."


One can realise the talent and impact that this man had with only a brief glimpse of those offering tribute and such warm words are demonstrative of the respect and love which so many felt for a true British comedy legend.

Porridge still remains one of my favourite programmes, always found with a smile instantly solving the question of what to watch should I be fortunate enough to happen across it of an evening.

He will be truly missed, it is a great and sad loss. I think the best that can be said of a man is that the world was the richer for him and this truly is the case here. Thank you for everything Mr Barker, may you rest in peace.

I will always remember his partnership with Ronnie Corbett and never missed an episode of their show, they just bounced off of each other and their comic timing was fantastic.

posted on Oct, 4 2005 @ 09:53 AM
link
Ronnie Barker was one of the true comedy masterminds, he achieved what this world needs more of, smiles and laughter.

Thank you Mr Barker, the world is a better place for you having lived in it.

I think his humour will endure long past his death.