NIAID, Moderna, and the UNC's Confidentiality Agreement and Transfer of Vaccine Candidates

This link will take you to that confidential Disclosure Agreement: s3.documentcloud.org...

COVID-specific pages start at 105. I encourage everyone to see it for themselves.

On November 9th, 2015 (remember this date), Moderna, NIAID, and UNC at Chapel Hill entered into an agreement. So what else happened on that same, exact day?

The UNC published a study in which they created a chimeric SARS virus that would later have the genetic profile of the virus they made 'browned out' on the day of the Presidential election (I cannot link to my own content so cannot provide proof but I have it).

This link points out where they admit they "forgot" to publish the sequence of the created-virus into GenBank and only added it later on May 22, 2020, nearly 5 years after publishing the article: www.nature.com... 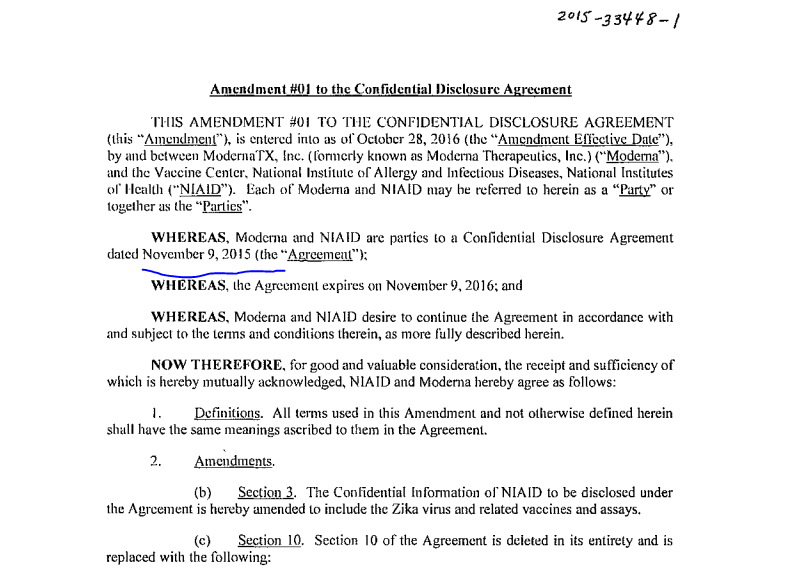 Check out the signature in the agreement: 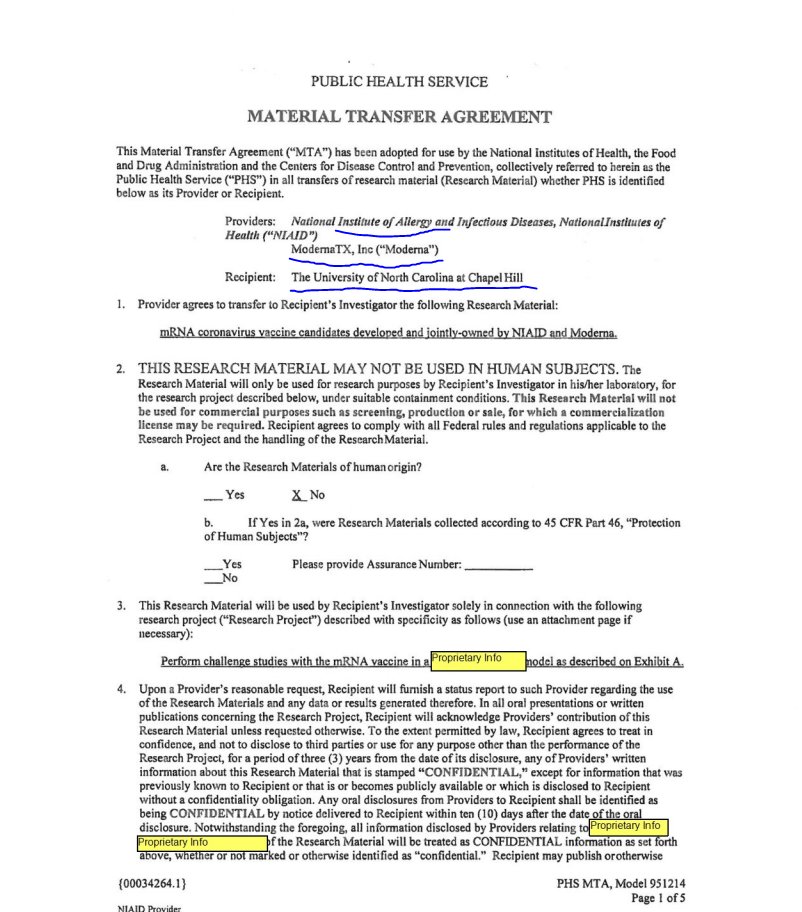 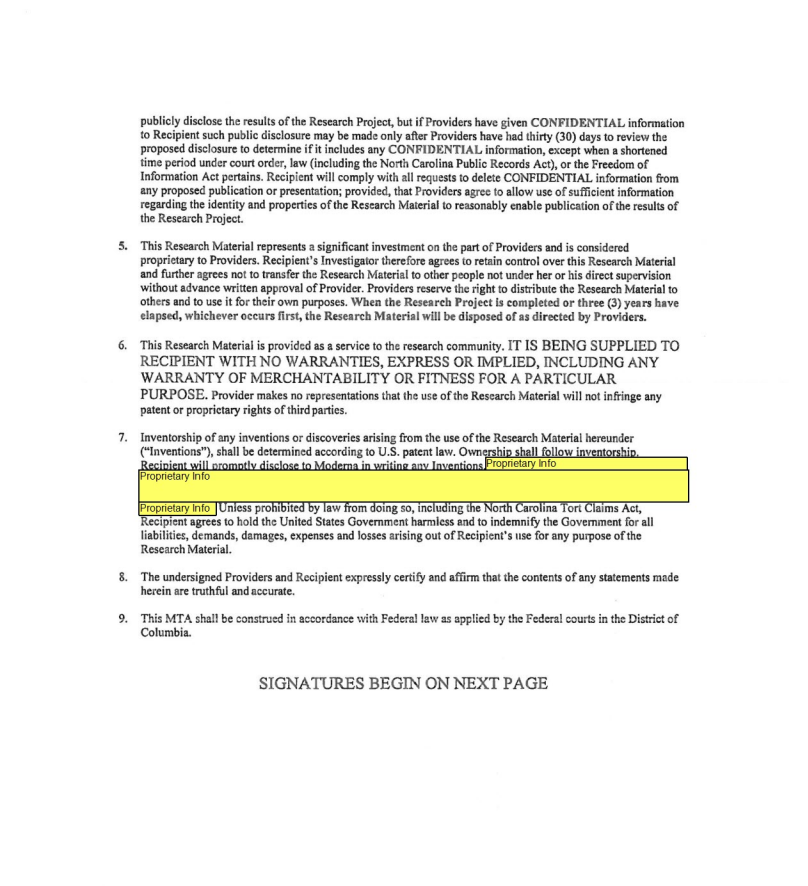 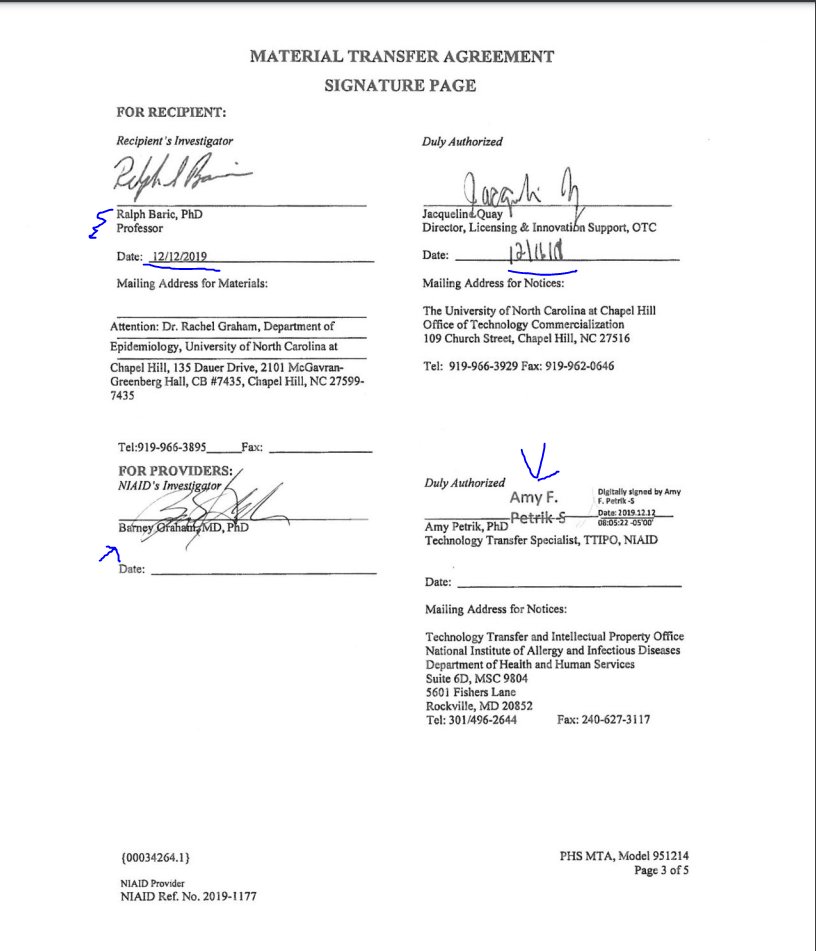 If you missed it, go back to the first image and at the top, under the "1.", you'll read this:

Then you'll see the following in bullet 3:


3. This Research Material will be used by Recipient's Investigator solely in connection with the following research project ("Research Project") described with specificity as follows (use an attachment page if necessary):

Perform challenge studies with the mRNA vaccine in a [redacted] model as described in Exhibit A.


Make note of the name of the man that signed the agreement: Ralph Baric - remember this guy's name AND the date of the signature: December 12th, 2019.

Now, to put it all together:

The same day that the UNC published a paper regarding a chimeric virus which was created in their lab (of which Ralph Baric was an author (see next pic)), Moderna, NIAID, and the University of North Carolina at Chapel Hill entered into a Confidentiality agreement. This agreement covered many items and transfer agreements, but the only transfer agreement I found from December 12, 2019 was the one related to an mRNA coronavirus vaccine and the transfer of its candidates.

One month later, the President is "contacting" Moderna to create a vaccine, which they created in 2 days and had clinical batch ready within 25 days.

And who signed that agreement? Ralph Baric 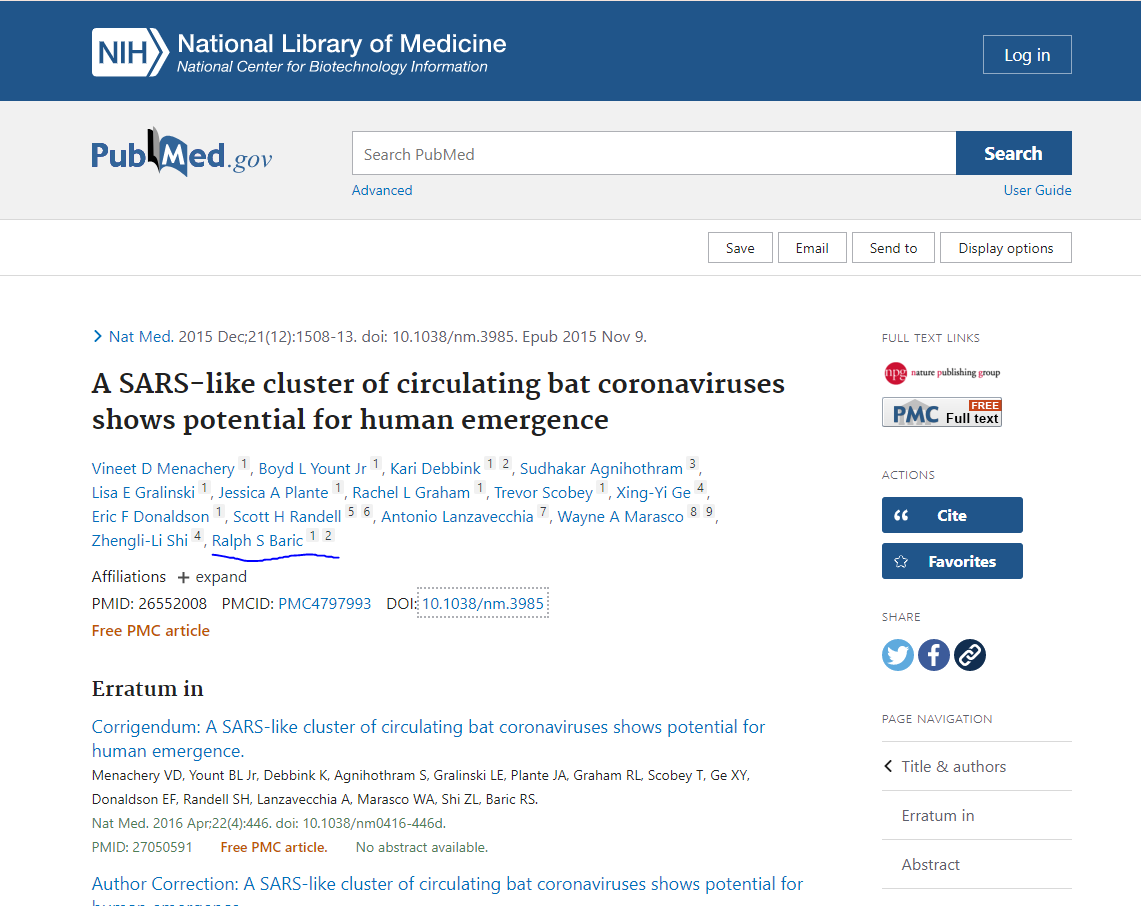 I think we're beyond conspiracy now and the above should prove it to anyone on the fence.

I believe the US created this virus and the moratorium was used as a cover to transfer the viral material and research to Wuhan for plausible deniability. I believe there was a military plan in place to attack China with this at some point, and I believe Trump pulled the trigger on it (similar to how the Bay of Pigs worked out for JFK - he didn't come up with the plan but ended up pulling the trigger right after his election).

I believe the US sees that China is now dominating everything globally, and perhaps Trump and his advisors determined that it would be a good idea to unleash this virus in Wuhan (using the Wuhan military games as cover), which is why when only 1 person had died from COVID, and only ~59 hospitalized, Trump was already reaching out to Moderna to unleash the vaccine.

Keep in mind that leading into the COVID pandemic, drones were flying over China, spraying their pig farms with swine flu, causing a 40% loss in their pigs due to necessary culling: www.inkstonenews.com...

They were also dealing with bird flu, resulting in mass poultry culling.

What was going on at this time? Trade war. One of the most important things for us to provide as a resource is pigs & poultry: www.reuters.com...

That's exactly what we did and for exactly that reason (their loss of pigs & poultry). But when that still didn't deter China's stance, I believe our government decided to attack them with this virus and it either back-fired, or it was meant to spread everywhere.


ETA: You need to use only the short code that is after the: ?v=


Oh, was it not working? I'm new here so what did I do wrong when trying to insert that video? Thank you!

posted on Jul, 22 2021 @ 08:56 AM
link
Or...China saw their economy going in the tank and released this to effect the world economy as an attempt to level the playing field.


Oh, was it not working? I'm new here so what did I do wrong when trying to insert that video? Thank you!

**Edit** nevermind, I figured out what I did wrong.


quote his post and you should be able to see how it works.

posted on Jul, 22 2021 @ 09:03 AM
link
I don't want to get off-track here, but I cannot find anywhere that explains the flags. Are flags like a member reporting something as bad? Can someone link to me an explanation or explain it to me?

Flags are a good thing. It shows that members appreciate your effort.

originally posted by: DAVID64
a reply to: BatSars

Flags are a good thing. It shows that members appreciate your effort.

I'm not sure what all is there but you may wanna browse through this when you have some free time:

Your analysis makes sense to me. Everything is hidden behind such a this screen of obfuscating bovine feces that it's probably nearly impossible to get to the truth: that's what politicians and governments do. But this analysis makes as much sense as any other, more than most.

I have never been convinced of Donald Trump's authenticity. There's always been a doubt in my mind that he was part of a psyop designed to primarily do two things: first, to draw out the conservative types; second, to build up people's hope for a turn-around then completely demoralize them when nothing of any actual moment happened (which seems to be a common theme of his administration).

I do have a question about all this. If the Gain of Function research that Fauci has been quoted as saying was "worth the risk in his opinion" was halted in 2014, wasn't he and the NIH funding it in UNC prior to it's halting? And if that's the case (again, not anything illegal) doesn't that make his statement in front of congress a lie?

As for whether he lied to Congress or not, I'd have to go back and listen to the specific question. The problem with proving perjury in this instance is the ease with which they can narrowly define GoF research and attribute it to something else.

I do believe he lied, but proving it is an entirely different story and involves semantical debate, which isn't likely to lead to a conviction.
a reply to: network dude

“In an unlikely but conceivable turn of events, what if that scientist becomes infected with the virus, which leads to an outbreak and ultimately triggers a pandemic?” he wrote. “Many ask reasonable questions: given the possibility of such a scenario – however remote – should the initial experiments have been performed and/or published in the first place, and what were the processes involved in this decision?

“Scientists working in this field might say – as indeed I have said – that the benefits of such experiments and the resulting knowledge outweigh the risks.

posted on Jul, 22 2021 @ 10:09 AM
link
Thank you for the video. When Paul references Wuhan's as being the location where the backbone is inserted, he's actually not correct that it happened in Wuhan.

If you look down the page of the study posted above, you'll see an area called "Contributions."

All of the chimeric creation was done in the UNC lab. The only thing the Wuhan researchers did was provide the spike sequencing and plasmids that they found in a cave (there is a link to THAT study published from the Wuhan lab prior to the one I linked above).

So that GoF research happened here in the US, not in Wuhan, so that specific question was not answered with a lie, but Fauci did move money to EcoHealth and funded a lot more studies in Wuhan, post moratorium:

Unfortunately, they re-did that web page so you may need to look at WB Machine post (prior to last year) to see those specific to Wuhan (since they lifted Moratorium): -------- welp, I just tried it and it will not allow you to view the old one.

Damnit. I wrote an article back in November where those links were used, but when I posted them, they were wholly relevant but they have since scrubbed the internet of the originals.

When the government is able to strangle the WayBack Machine, you know things are bad.
a reply to: network dude

But anyway, back to your question -- when I read through the studies conducted in Wuhan, through EcoHealth Alliance, none of them jumped out at me as Gain-of-Function.

Where I believe he lied is that they funded GoF after the moratorium, which is evident in the date of publication, though it could be argued they had already completed that research and the time difference was for actually publishing and editing, etc.

I disagree with the US. vs. China piece.

For me there is no separation. The same people that control the US control China.