posted on May, 4 2021 @ 06:25 PM
link
Never buy it, some say.
Alright, so if combating a pandemic means some form of immunity, then let's see, what options are around? Get the bug, that's one. Get a vaccine, that's another.
So, a big old pandemic sweeps the globe like a rabid roomba and the next thing you know, people are running up with their sleeves rolled up to get stuck with an experimental, promising-sounding concoction of all sorts of fun things and hopefully, probably, it provides some degree of immunity and puts a stopper in the spread of Mega Bug Buddy. Great!


But all drugs have side effects. Sure. Ever hear those TV commercials with Jimmy and Jane holding hands watching little Emily on the park swing on a sunny day in Nebraska while they tell you all about the lung collapse, kidney malfunction, heart attack, brain tumors, and other various internal bleedings and medical emergencies their wonder drug is capable of producing under unfortunate circumstances?

So, it's understandable why a lot and I mean a LOT of people aren't going to line up to be a guinea pig for an irreversible jab in the flesh that has only been studied for so long, and have no idea how they'll react to it. That doesn't make any of them "cowards" or "paranoid" or "conspiracy theorists."

Some people just don't like medicine, period. Heck, I've never gotten a flu shot. I don't intend to begin. Does that mean I don't believe in medical science and medicine? Of course it doesn't. I do! I believe in the polio vaccine. MMR. Shingles. You name it. Does that mean I'm on my way to line up to test drive a brand new tech? No. But I am not against it, either. I'd just prefer not to be the research, and I have nothing, and I mean nothing, against the people who do volunteer to get it.

But fear not, for those who aren't so hot on jabs, wait for the next generation product--nasal sprays and pills!
Maybe, just maybe, you won't have to get stuck anyway. Well, no guarantees, so I'm not going to tell you to hold your breath, but check it out:

“It’s a very easy and efficient way to administer the vaccine,” said Scot Roberts, Altimmune’s chief scientific officer. “You don’t need needles and syringes.” The vaccine uses a modified version of a harmless virus called an adenovirus, which is engineered to carry a genetic code that instructs the body’s cells to make the spike protein from the coronavirus. This induces an immune response, including the production of antibodies in the blood, building a defense against the real virus. The design is similar to injected Covid-19 vaccines from Johnson & Johnson and AstraZeneca. But because Altimmune’s vaccine is administered as a nasal spray, it also might induce a type of immune response known as mucosal immunity, which could help clear virus from the respiratory tract, thereby helping reduce virus transmission by vaccinated people, according to Dr. Roberts.

Neato, right? At least, at the very very least, those who got stuck may not need to keep taking the Needle Baptism on a yearly basis. Just do the old vics vapor snuff maneuver and no covid. Sounds pretty good. Hey, it's even made "traditionally" using the old fashioned harmless adenovirus.


So, it's understandable why a lot and I mean a LOT of people aren't going to line up to be a guinea pig for an irreversible jab in the flesh that has only been studied for so long, and have no idea how they'll react to it. That doesn't make any of them "cowards" or "paranoid" or "conspiracy theorists."


I quickly got tired of hearing/reading comments along the lines of, "if you don't get the vaccine, that must mean you're afraid of it." But the worst part is that people who say things like that, I think they actually believe it. It seems they don't even realize there are other logical reasons for not getting it.

I'm not saying my own reasons are logical, but personally, I just don't feel I need it. I'm not much of a people person, I don't go to the Doctor, and I've never had a Flu shot, so no reason to start now.

posted on May, 4 2021 @ 07:55 PM
link
"You can't sue Pfizer or Moderna if you have severe Covid vaccine side effects. The government likely won't compensate you for damages either."

That statement alone should be a red flag for EVERYONE. No way should you EVER take that vaccine for any reason.

To be fair...I am actually more afraid of it than Covid...and I have the crazy long term stuff from it...although barely getting sick enough to notice at all. I'd much rather lose my smell mostly and have weird sleeping and eating disorders than be paralyzed or have blood clotting.

I quickly got tired of hearing/reading comments along the lines of, "if you don't get the vaccine, that must mean you're afraid of it." But the worst part is that people who say things like that, I think they actually believe it. It seems they don't even realize there are other logical reasons for not getting it.

Agreed it's not abnormal for an Average citizen to shun medicine.

I've met and known plenty of people in my life who will not even take an Advil much less an untested Vaccine .

Your title is more accurately read as;

That doesn't make any of them "cowards" or "paranoid" or "conspiracy theorists."

You're correct there. In fact it actually shows that I am well informed. In my age group, there's apparently about a 1:50,000 chance of dying as a result of covid complications. When I look at the health distribution within that population group I do not fall anywhere near the unhealthy end in that distribution, therefore, on a risk/cost benefit analysis I will be far better off trusting my immune system.

They will find a way to get you to take something.

No, no they wont.

edit on 4 5 2021 by myselfaswell because: formatting

originally posted by: myselfaswell
a reply to: servovenford
"They will find a way to get you to take something."

No, no they wont.

Well... unless the rumors of a vaccine that spreads like a virus are true...

posted on May, 4 2021 @ 09:03 PM
link
I am not afraid of the vaccine or the virus. I really don't feel like getting the virus, so I will just be a little cautious, I will lower my risk. I am leery of the vaccine, I like more safety evidence against all possible side effects, which includes long term side effects. If I could take this vaccine I probably would not do it till I observed what happens to the people taking it in another six months or so. All medications have side effects. I am not alone, there are about forty percent of Americans who do not yet trust this vaccine yet.

I shun the crap out of meds. They aren't natural to me like magnets to a hard drive. Sure sometimes you must take them but I try to make those the times where its either you will be cured in X amount of time or if you don't you will die. If its not one of those 2 it has to be really bad to drive me to any meds.
edit on 4-5-2021 by RickyD because: (no reason given)

Right, I just happen to be one of the people, like you, who would prefer a lot more time for research and data on possible effects before putting something into my body.

Nothing wrong with that. I'm pretty much the same way, I don't take what I don't need. I see some people just taking whatever pills for the littlest things, advil for a mild headache, handfuls of tums after 2 consecutive burps with no underlying stomach conditions, etc... and I can't help but feel that there is no way that is healthy in the long run. I admit, I'll pop a tums once in a great while. But other than that, I minimize medicines as much as possible. Which is near zero.

At the very least things like pain meds will work better. I believe in a tolerance and you build one up for anything. I'd rather pain meds and the like work well for little dose than have to take a lot to get the desired effects.
edit on 4-5-2021 by RickyD because: (no reason given) 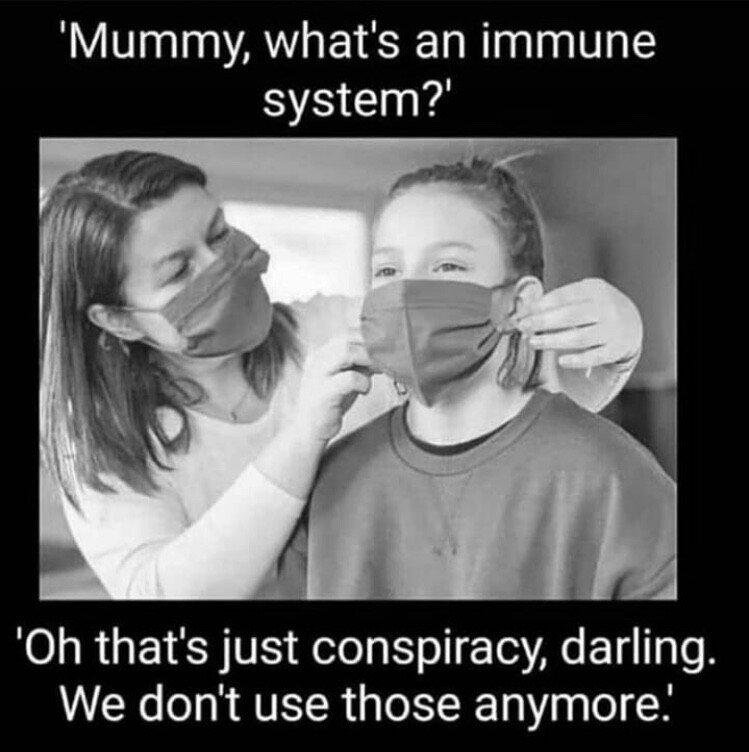 Meanwhile, the regular flu has completely magically disappeared and so does not kill the elderly anymore....

I'm not much of a meme guy but that one I found amusing. Thanks for the chuckle.