It was the morning of May the 3rd, 1975, and Carlos was a 23-year-old pilot working for a private company, eager to attain more experience and more flight hours under his belt; you could say the ‘need for speed’ was in his blood, both his father and older brother were also pilots. On that day, the memory of which would haunt him for the rest of his life, young Carlos was returning from Zihuatanejo (a coastal city in the southwestern state of Guerrero) to Mexico city. He woke up very early, had a good breakfast, fuelled the Piper PA-24 with registration XB-XAU he would pilot, detailed the flight plan, and took off for the Benito Juárez International Airport on what should have been an easy and uneventful flight.

Here's a 23 year old Pilot. No history of lying or making things up, in fact he didn't even believe the U.F.O. stories that were being told.

Just a few seconds after he passed the VHF Omnidirectional Radio Range (VOR) beacon located in Tequesquitengo and corrected his course, Carlos had an eerie feeling, as if someone, or something, was observing him. Not an unusual sensation if you’re sitting in a crowded bar, but certainly unexpected when you’re flying thousands of feet above the ground! And that’s when the pilot glimpsed something out of the corner of his left eye, he turned to observe a wingless craft of a dull grey color. The object, which had a shape of flattened rugby ball, was smaller in size than Carlos’ plane, about 3 to 4 meters in length, with a cabin on top equipped with a windshield made of what looked like ‘polarized’ dark glass, was flying silently just above the Piper’s left wing. He immediately had the same weird feeling coming from his the other side, and saw a vehicle with the same characteristics flying over his right wing.

Carlos had no time to react, because a third UFO appeared right in front of the cockpit, and this one plunged to the underside of his Piper at a 45 degree angle. Fearing a collision and acting out of pure instinct, the pilot pushed the controls forward to dip the nose of the plane; the object dove in and loudly scraped the lower part of the fuselage, damaging the landing gear.

Carlos drew a picture of what he saw. 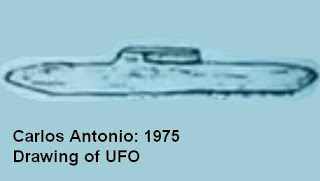 Again, what makes this an interesting encounter is because you have multiple witnesses, radar confirmation, damage to the plane and multiple U.F.O.'s sighted in this same area.

The young pilot felt like he was losing his mind: He had never taken the issue of ‘flying saucers’ seriously before, and neither had his dad or his pilot friends ever mentioned them. Now he was surrounded by not one, but three unidentified flying objects mere inches away from his fuselage, with Carlos completely defenseless and at their mercy. It was as if some mysterious force or energy emanating from the objects was guiding the plane and keeping it on the air. In a rage, he frantically tried to ram the object to his right, but all his manoeuvres were to no avail. The plane kept its original course, but it was gaining altitude, and Carlos Antonio feared that if it went any higher he would die because his cabin was not pressurized.

Crying, Carlos proceeded to do the only remaining thing in his power: He radioed a mayday message to the control tower in Mexico City to alert them of his situation.

Here's the video and the translation of part of the call.

00:48– [C] I have three unidentified visual objects flying around me

00:54– [C] I have three unidentified visual objects flying around me

00:58– [C] One of them rushed toward the plane and it hit me on the lower side of the plane

Carlos lost control of the plane and it was being guided by the U.F.O.'s. This lasted for 18 minutes and then the U.F.O.'s let go.

Suddenly, the UFOs ‘detached’ from his plane, and fled toward the Mount Popocatépetl volcano at a speed greater than 900 km/hour, and performing an impossible turn of 270 degrees on a very reduced radius of action of just 3-4 miles. It is important to point out that the majestic volcano, located some 72 km to the southeast of Mexico City, has been the scene of numerous UFO sightings throughout the years, some of which have been recorded by cameras intended to study the mountain’s volcanic activity.

Here's a picture of a U.F.O. spotted near Mount Popocatépetl in the year 2000. 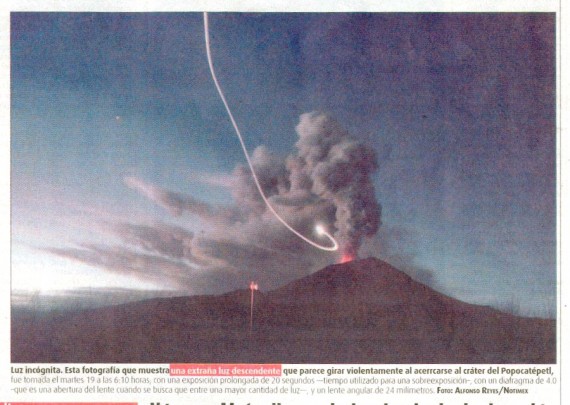 Here's a pic of Carlos plane showing damage to the landing gear. 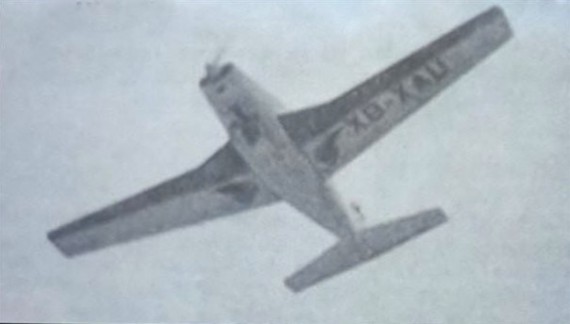 Now, when Carlos landed, he was taken to the Hospital in an ambulance and of course they tried to explain it away.

The unnerved young man was taken to the clinic inside the airport for a checkup and was given some sedatives to calm his nerves. A day later he was examined by Dr. Luis Amezcua, chief of the airport’s medical services, who determined the pilot wasn’t under the influence of any substance which might have altered his perceptions. The physician confirmed his good health and gave him permission to continue flying. As a possible explanation for Carlos’ extraordinary account, Dr. Amezcua tentatively suggested he might have suffered from hallucinations triggered by hypoxia.

Sadly for the good Doctor, the radar techs rained on the hypoxia parade and confirmed Carlos story. Even the part where the U.F.O.'s sped away and performed the same manuevers Carlos described.

That would have probably settled the matter for all the authorities concerned and completely ruined the young man’s career, were not for the testimony of Julio Cesar Interián Díaz and Emilio Estañol López, the two radar operators working that day on the control tower. The radar operators observed a fast-moving echo on their screens departing from Carlos’ location at a speed of approximately 400 to 450 knots, making the exact same manoeuvre he observed from his cockpit. Their affidavit was recorded in an official minutes of the General Directorate of Civil Aeronautics, by the Office of Aeronautical Authority for the International Airport of Mexico City, on May 8th of 1975.

Furthermore, the examination conducted on Carlos’ plane confirmed it suffered an impact which blocked the landing gear’s mechanism. Such a collision could have only happened in mid flight.

Not only did they confirm Carlos story, they signed an affidavit saying this. They also did this:

But aside from Carlos and the two radar operators, there were other witnesses to this astounding case. While he was still flying under the control of the UFOs, the Mexico city control tower radioed a second plane, a Learjet owned by the Ministry of Agriculture and Livestock, registration XC-SAG, and asked the pilot to attempt to make contact with Carlos and try to assist him. The pilot visually confirmed the presence of the unknown objects and informed the control tower, but could do nothing further.

If that’s not enough to make this a truly exceptional close encounter of the second kind, there’s icing on the ufological cake: Carlos Antonio initially received threats when he tried to go public with his story. The first appearance he was scheduled to make was in the TV show Un Mundo Nos Vigila (A World is Watching Us), hosted by Pedro Ferriz, the father of Mexican UFOlogy; the hour to go live came and went, but Carlos never arrived to the studio.

That night, when Ferris phoned the young pilot to complain about his missing the TV appointment, Carlos explained that on his way to the studio his car was intercepted by two black-painted, Ford automobiles bearing diplomatic license plates, and out of them came four individuals wearing black suits.

The men had blonde hair, Caucasian features, no facial hair, and, even more strikingly, they all looked completely identical.

One of the ‘Men in Black’ stuck his head inside Carlos’ car and said “if you appreciate your life and that of your family, don’t say anything;” his face was inexpressive, and the words were said with a perfect Spanish accent, although with a strange ‘mechanical’ tone.

Ferriz convinced Carlos Antonio to try again for another TV interview, which he bravely accepted. Ferriz also arranged for a private meeting with his good friend and colleague Dr. Allen Hynek, who had traveled to Mexico expressly to interview the witness of this exceptional case in person. They met in Hynek’s hotel room, and questioned Carlos for almost eleven hours. A final reunion was convened for the next day at 9 AM to go over some final details before Hynek’s departure, but Carlos Antonio never arrived and the American UFOlogist returned to the States.

Three days later, the pilot phoned Ferriz to confirm Hynek’s suspicions that he had been threatened a second time and indeed, Carlos told the Mexican investigator how he had been intercepted in the hotel lobby by one of the same fearsome individuals he’d met before, who reminded him that this was the second time he had been told to keep his mouth shut. With a cold, penetrating gaze, the MIB ordered Carlos to turn around and leave, which he did. As a result of this, Ferriz thought it best not to seek the young man for a while.

There you have it, a Close Encounter of the Second Kind and a very solid case. Here's a recent video of the case:


Thanks and it's one of many solid U.F.O. cases.

More is on the way. There's a lot of solid close encounter cases out there with credible witnesses.