Siri says Police are demons....just ask for the definition...

Wonder what Apple has to say about this? 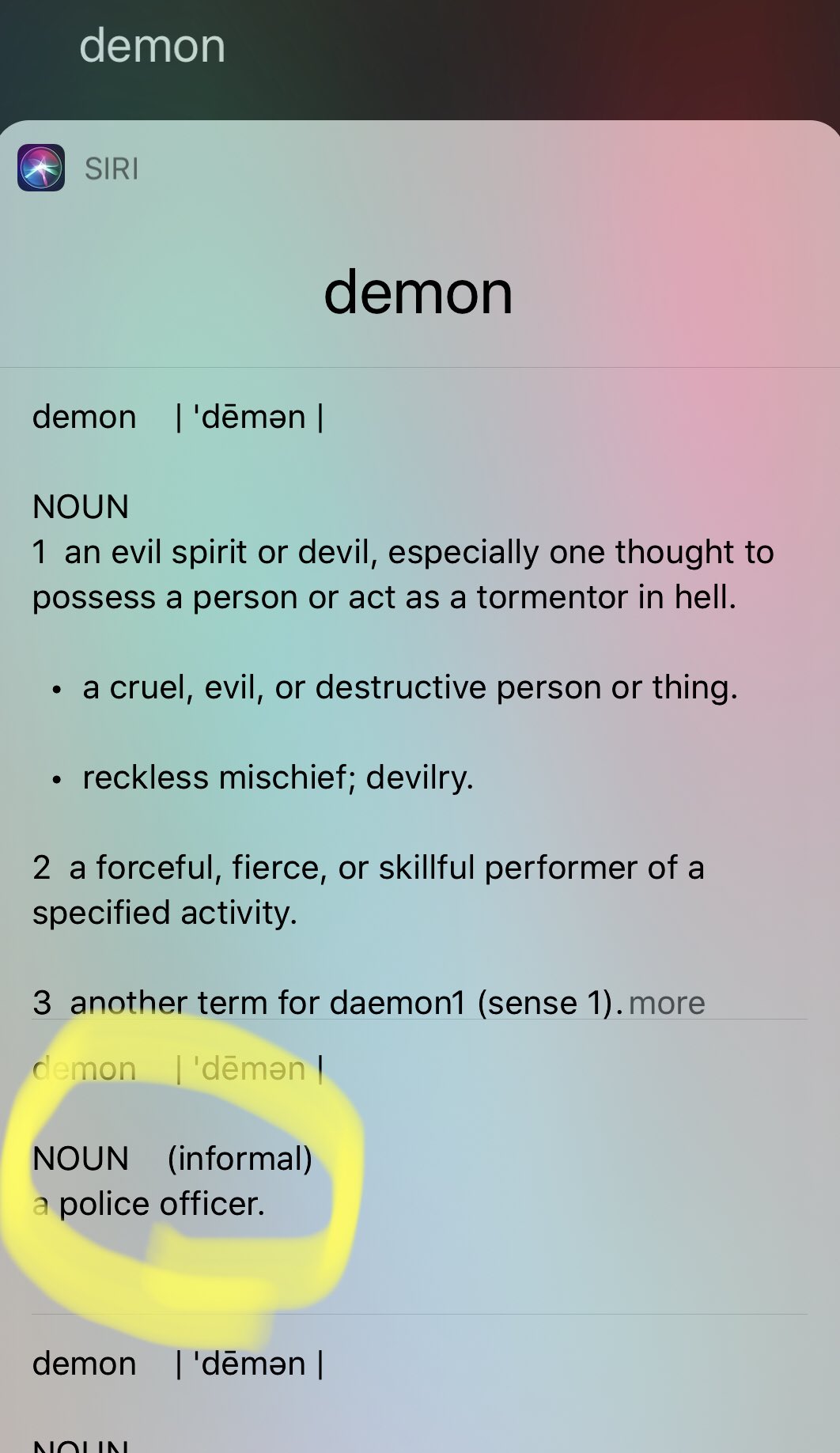 Who owns SIRI? Who will they call if robbed, burglarized, car accident, etc..?


Siri is a spin-out from the SRI International Artificial Intelligence Center, and is an offshoot of the US Defense Advanced Research Projects Agency's (DARPA)-funded CALO project.
- wikipedia -

Forget the mobs, corporate entities and their leaders should be held most accountable for the Marxist Insurrection. None of it would be happening without their support, agitprop and funding.

Ironic really considering if there were a successful Marxist revolt then the leaders of these corporations would be amongst the first shot as enemies of the people. 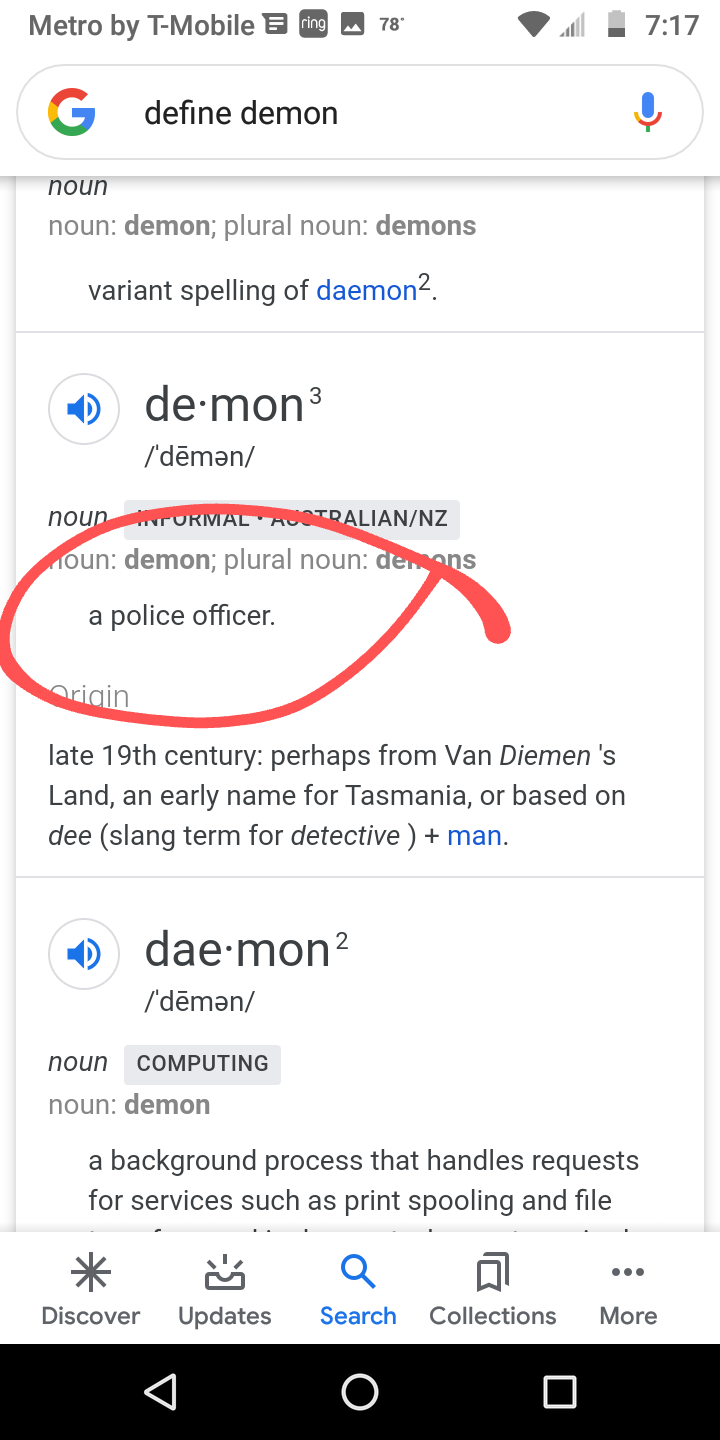 I wonder if Apple needs the lady doctor from Africa to perform a exorcism? 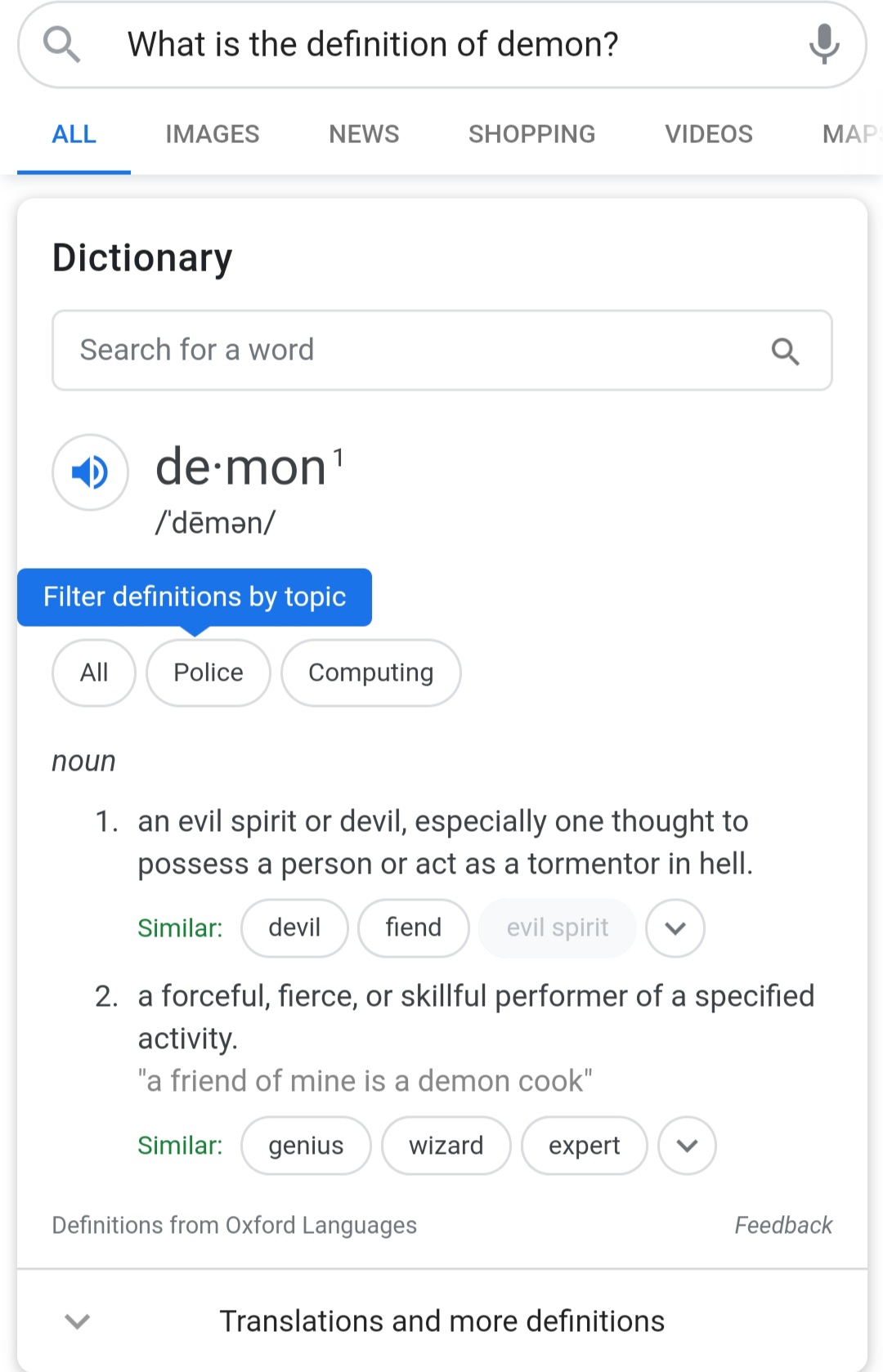 
Checks out. I just tested it. Crazy, but I'm not really sure that I'm surprised. I think we're on a road now that leads nowhere nice...fast.

originally posted by: underpass61
a reply to: RMFX1

I doubt it. They don't need to make excuses anymore. The current cultural narrative according to the media mirrors it doesn't it?

originally posted by: underpass61
a reply to: Vasa Croe
if you click on translations and more definitions it will put you through to the page I got.


I agree. It wouldn't even be morally wrong to prioritise areas that house tax payers who actually contribute to the costs of these services would it? Especially if they're asking for it.
edit on 29-7-2020 by RMFX1 because: (no reason given)

In this age of defunding the police i think certain emergency callers should have low priority assistance.

That's already how it works in many places. Defunding the police won't cause a problem that already exists.

The more it goes on the harsher the pushback from the silent majority.

To echo a sentiment from an older post of mine

If the left continues as is, with it’s vitriolic racial hatred fueled by identity politics, things will get much, much worse. The right will be similarly radicalised and extreme. When the pendulum inevitably swings right, then certain Italian and German ideologies that are better left buried will likely make a mainstream resurgence.

It is why i favour such a harsh and immediate crackdown against the ongoing violence and sedition. Deliberate attempts to violently overthrow a democatic society in favour of a Marxist State must not be tolerated. Corporate sedition, fueled by hostile foreign powers must not be tolerated.

If not, then the masses will cheer when a Fascist dictator hangs the Communists in the streets. Democracy dies to applause. But the Fascists won’t stop there, and by then it will be too late to oppose them.

The historical precedence exists. The Kingdom of Italy, Republican Spain and Weimar Germany were democratic societies. They all became Fascist & National Socialist dictatorships in no small part as a reaction to radical leftist violence and excess.

Why do you think that they want to get rid of the police? It's because they want to come after you. It's clear.