An interesting video came in this afternoon.

Im posting a link to it because I want some input from you all.
This object apparently flew over the city of Toronto in a minute and a half - with multiple witnesses in differing parts of the city.

Some of you know my full time job involves Drones, so I'm very familiar with how they fly, their differing capabilities between a consumer level drone vs an industrial level drone.
All consumer and industrial level Drones need to be equipped with always-on red lights, and blinking or off green lights.
This object has neither.
I'm going to provide some information to assist you guys with taking an educated guess,
however as always, some stuff needs to be vague or left out to ensure the witnesses identities are not made public.

witness #3 was on the other side of the city. They did not get anything on video, but their recollection of events matched the original witnesses.

The video is genuine - there are no signs of manipulation.
The witness who submitted the video is very credible and holds a masters degree while working in a high level position.
They have no reason to make a false claim.

The Witness estimated the object being 10-15 ft long, flying against the wind at approximately 200 meters AGL.

There's Nothing on Flightradar24.
No NOTAMs issued for a drone flight over the city.
A top of the line consumer level drone has up to 8 km range.
However, flying at that distance, a drone pilot is going to need video transmission to ensure they get their $3000 investment back.
A lot of factors interfere with drone video transmission - buildings, weather and other electronics broadcasting on the same 2.4 or 5Ghz.

The object flew a straight trajectory until it disappeared.

The witness first noticed the object out over the city int he distance.
They were able to run into the apartment and grab their camera, however they left the tripod in the house because they were in a hurry to get something on video before it disappeared.

Anyway, take a look at the video, and throw out some ideas.
Any questions, I'll try to answer the best I can. 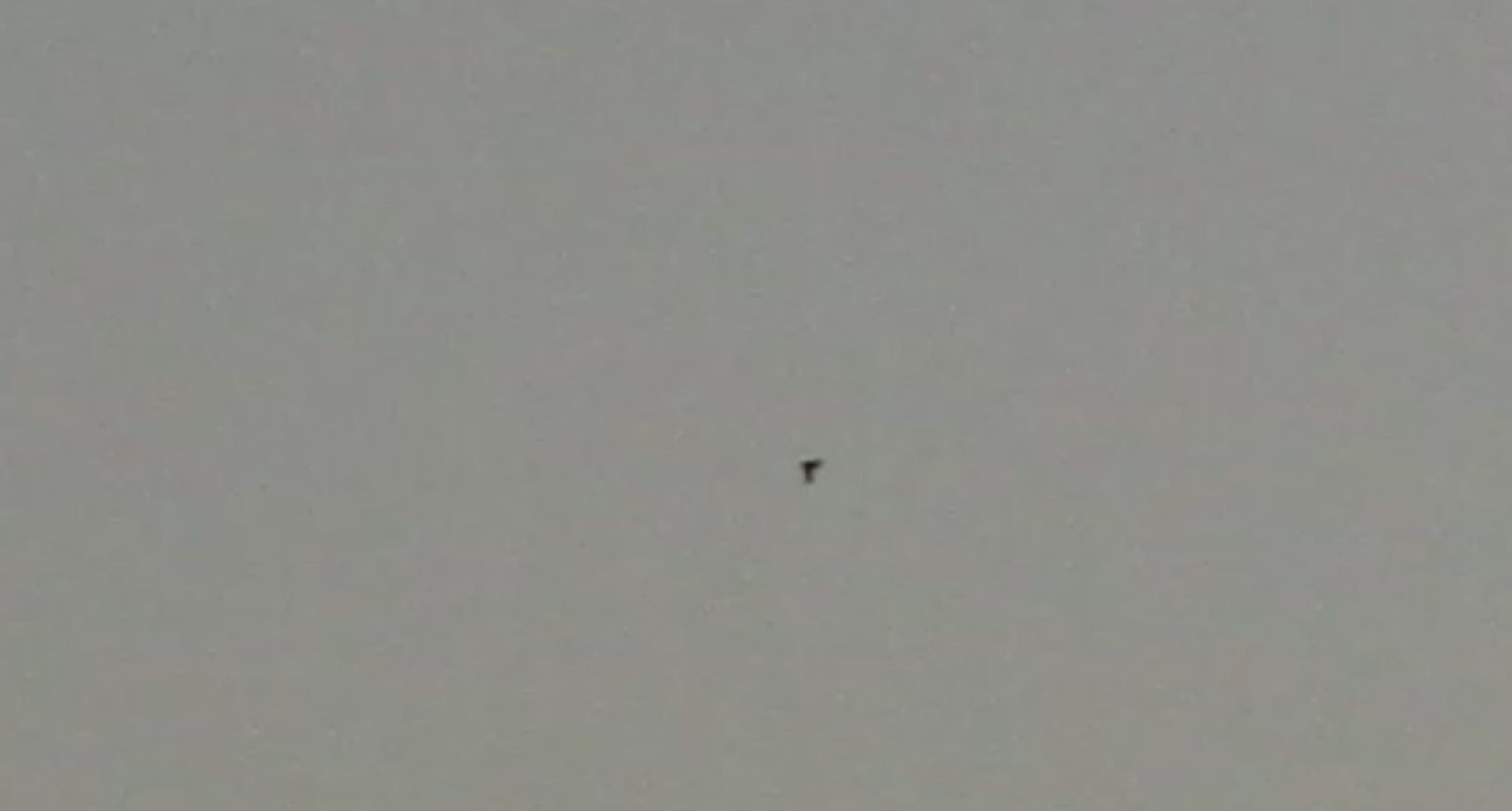 Not yet, but they're bidding a new fighter. Bids are due in this summer, and that's one that may be bid. There are a couple aircraft it could be, but it's not clear enough to tell for sure.

I was going to say a Phage blurdy,
But blown up a little, it is reflecting light in the upper part..not in itself unusual, while the reflection is quite distinct. 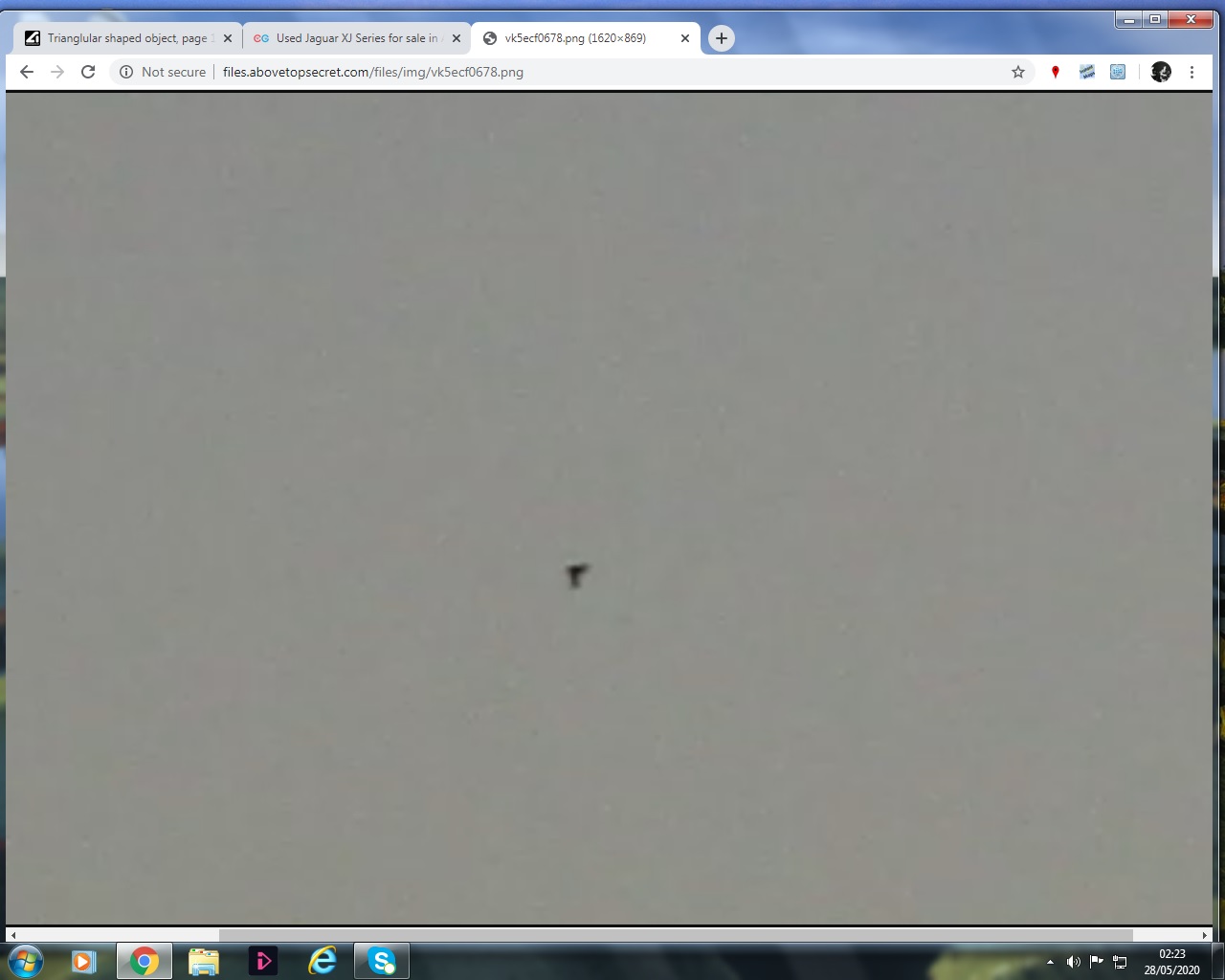 That shape is something I have seen before...a few years ago.

Could be a garbage bag, a UAV, a scout triangle UFO (oursor theirs), or anything else you can ascribe to it!

Which makes it interesting in and of itself!

YAY to weirdness in this world!! (Even it is ours!! Most havenot seen ,including me, the smaller triangles (prolly overhead all the time, I just never look).

PS - It could be anything but if it is... well, several people here on ATS already know. And may sleep a bit better that that are not crazy (never thought you were. I just know that you think that we may have!)

The UK and US aviation industry's share a lot of technology, component's and even designers (Canada has it's own world leading engineers but they are under key about there operations and they usually buy from either of these two sources anyway).

To my mind this look's pretty close to a Taranis, not identical but remember shared designers and technology's.

Remember the US was the first to have a proper stealth drone and this was built on the technology used there with some homegrown additions' and improvement's which will have also fed back to the US military - but likely the US military with it's huge budget already has secret drones ten to twenty years ahead of even this in the time it would take nations with smaller budgets to catch up to it.

BUT also remember just because our aircraft and drone's take up a shape that is similar does not mean that an alien species or even a break away civilization would not also use similar shapes, there is a reason these shapes are useful and that is there aerodynamic property's which should make you wonder if we are being visited by or are co-inhabiting our world with another species that most human's know nothing about then why would some of those thing's we AUTOMATICALLY assume to be nothing more than a plane not also be in actuality of non human origin?.

That said there is also the field of optical stealth camouflage which many defense forces around the world are researching, this can not only be used to hide in plain sight but make an object appear to be what it is not.

Interesting but I reckon it's most likely a drone or stealth aircraft, with the new cold war hotting up for a while back there the US and perhaps also the RCAF may have been making fly overs on the way to more sensitive area's from secret facility's and of course Canada offers even more room for those facility's than the US does with much more wilderness in which to hide just about anything the Canadian authority's or the US (presumably with Canada's permission) could ever want to and I am certain there are many top secret site's still left over from the old cold war era as well.

Yeah very similar actually.
But to fly it over a city with a population of over 4 million, and no NOTAM issued?
Seems odd.

Not really. As long as there is certified sense and avoid tech, or a chase flying nearby, there's no reason for a NOTAM if it's a UAV. It's more likely to be manned, but several UAVs have been flown to where they were going, instead of being shipped. Sense and avoid is here, and before long will be either standard or refitted on just about all UAVs.

originally posted by: crayzeed
There's nothing in the video to reference to. But it looks like a hand glider to me.


Looks a little like a large aerial photography kite.

This provides context to the actual elevation of the object and its proximity to the witness, for a better judgement of size.


Is there anything that can suppress the noise? A drone flew over my house a couple weeks ago and it buzzed louder than a full-sized helicopter. Perhaps a good way to distinguish drones in video is to do more analysis of the sound recorded. A buzz beneath the profanity.

Exactly, the red lights provide visual orientation for the pilot.


So we'd at least be able to differentiate between a commercial and a military drone. Does the military fly a lot of drones over cities?

Right now, no. But once sense and avoid is installed and certified they'll be able to fly them from the plant to their home stations, or from base to base, which will include some flights over cities.