page: 1
28
log in
join
share:
TrueAmerican
+3 more
posted on Jan, 7 2020 @ 03:41 AM
link
In a bizarre sequence of quakes, a day or two ago there was a 5.8 which rattled residents and caused damage, including the entire collapse of Punta Ventana- an outcropping of rock along the coast. But now this has escalated with the 6.5. 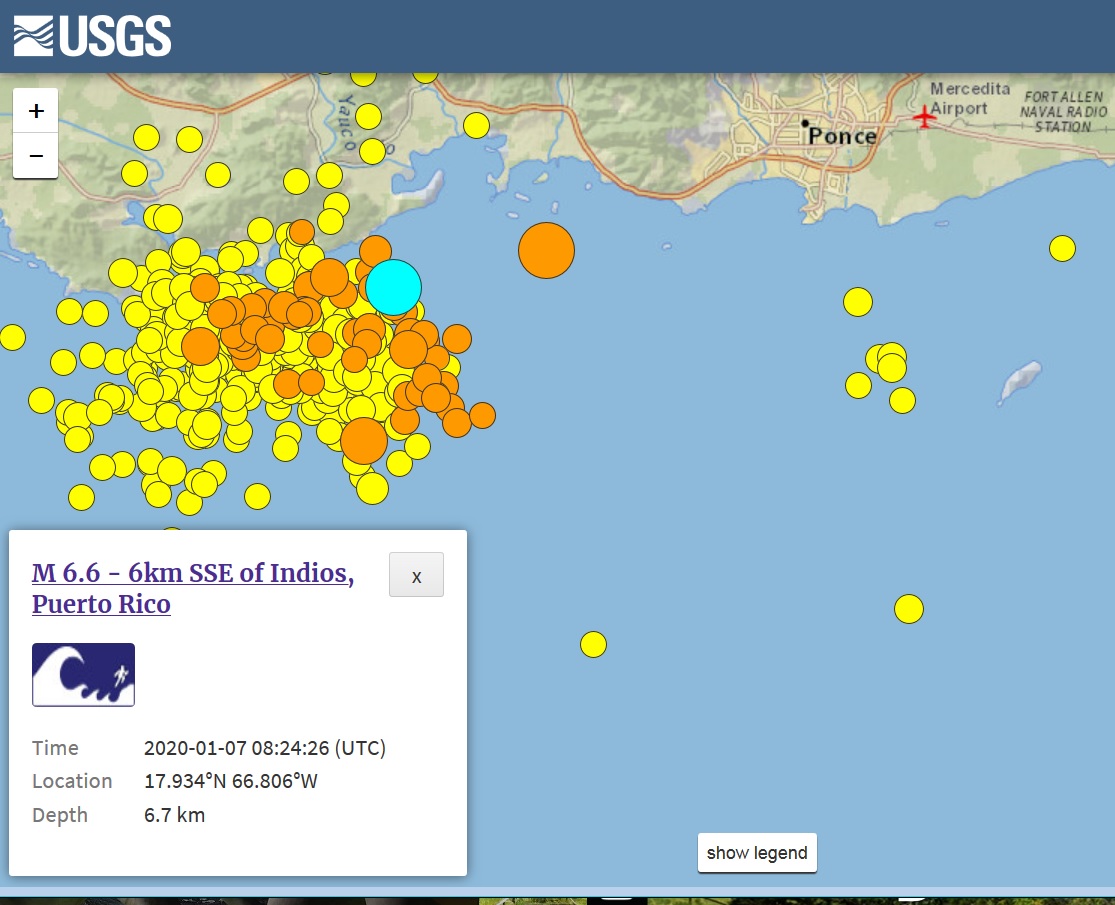 These appear to be intraplate quakes, as they are happening on no known fault. Residents have reported constant rumbling, and I can certainly confirm that on the spectros. The fault is agitated and with the increasing magnitudes has potential to produce more. The other problem is they are relatively shallow, causing even more grief and powerful shaking.

The entire Island's power went out when reportedly the auto switch at the plant in San Juan automatically shut the plant down.

The bigger issue is with these intraplate quakes they can tend to be big, so they could be moving towards a much bigger one, and there is about a 5% chance of that. Intense 5+ aftershocks have been incoming, and are not even represented on that picture. Check the USGS map for more to be reported soon.

But yeah, that situation is not good at all.

ETA: They removed the 6.6. Apparently it was just one 6.5 they are saying now.
edit on Tue Jan 7th 2020 by TrueAmerican because: (no reason given)

posted on Jan, 7 2020 @ 04:13 AM
link
Islands come and go faster than continental land masses. It was amazing to see a sped-up animation of how islands form and eventually sink, while surrounding major landmasses remain in tact.

The end of the World is nigh!

Or is there an agenda to make it so?

I have family in Vieques, PR. Island off the east coast of the main island Puerto Rico. They felt minimal - moderate shaking there.

Do these intraplate quakes behave the same way as interplate quakes when it comes to aftershocks? It looks to me like the plate is relieving pressure with regular aftershocks and usually I would not be concerned that the 6.5 was a foreshock because of this.

Just curious what your take is.

Wow. Knowing nothing of Puerto Rico I thought maybe Punta Ventana was a city. Thankfully not! But impressive damage...

The 6.5, which was downgraded to a 6.4, was never a foreshock. It is now the mainshock unless another even bigger one comes along. And you are using two interchangeable terms. Intraplate and interplate mean the same thing. Basically, that the quakes are occurring on the interior of a known continental tectonic plate, as opposed to on the edges of a plate where subduction, transform, and divergent faults occur.

But intraplate quakes along unknown faults, when it comes to any kind of predictable pattern, are no different than any of the other types; no one knows what is going to happen next.


Damn. It looks like it used to be a spectacular place.

Didn't something similar happen to Malta not long ago?