The Shipping Container Revolution for Navies

posted on Oct, 18 2019 @ 12:23 PM
link
lets face it the world runs on shipping containers. Those ubiquitous boxes that are easily plucked off of ships and can be placed right on a big rig. These containers known as intermodal containers are everywhere and typically measure 40 feet in length. Now defense contractors are looking at them for portable weapons systems: (The Chicoms and Russia are also developing systems)

Given that the USN will not be able to complete its vision for a vastly expanded navy. Adding these systems to existing logistical support craft, or simply hiring a say a PANAMAX sized cargo container and station an array of containers:

posted on Oct, 18 2019 @ 12:27 PM
link
Or a container ship could become one bad ass war machine if needed. Lock them together like Lego's and who knows what you could come up with.

originally posted by: mikell
Or a container ship could become one bad ass war machine if needed. Lock them together like Lego's and who knows what you could come up with.

posted on Oct, 18 2019 @ 01:16 PM
link
Shipping containers were a massive game changer. Probably the biggest as far as commerce. Bigger than rail or roads combined IMO.

You could bring them on one of your aircraft carriers. Make these banana helicopters bring the container to shore.

Maybe make them have like pop out wheels and remote controlled. Imagine it. The motor could be used for hydraulic systems, too.

That's why they will be escorted by pods of dolphins with lasers mounted on their backs.

I actually had plans drawn up for water filtration containers based on shipping containers to send to 3rd world countries with large refillable bladders to allow for fresh water to be brought to areas it usually isn't available.

Weapons systems would be very interesting.

Containers are also made to be stackable up to 9 containers high and be completely structurally sound.

You could create bullet proofed above ground bunkers for fire fights pretty easily. Actually not a bad idea for bases that can be torn down and easily transported.

Well, atleast they have good cgi AND the sneak attack plan.
Gotta have a plan

Someone grab a rocket launcher and shoot that thing out of the sky already.


They are slow, but it all depends on the condition of the enemy forces.

Nazi Germany dumped incendiary bombs out of JU-52 cargo planes during the campaign against Poland. I could see a situation where you might need to outfit cargo ships to dump missiles into a partly defeated... let's say, China, to beat them into submission.

Makes more sense to turn them into housing.

originally posted by: grey580
There are so many containers sitting in Seattle and rotting.

You can only build so many Starbucks out of unused containers.

It is cheaper for companies to leave the containers when shipped.....that's why there are so many.

They actually make great bunkers and pools for really cheap.

Seriously, you could mount them on the outside of a hull filled with something that would absorb impacts so that if you're in an area where torpedoes might be milling about, that could protect the ship. The filling would have to be buoyant enough but enough of them and even a big hole in the hull might not be a sinking event.

I remember reading just a scenario somewhere a few years back where a shipping container ship was launched as a troop carrier in a surprise attack , and it would be easy to carry a nuke to a enemy port shielded from detection

My wife is in the shipping business.

She works for a popular fruit company. They ship the containers back with loose cargo going to central and south america. That way they can re-use the containers and not lose/make money sending them back.
edit on 18-10-2019 by grey580 because: (no reason given) 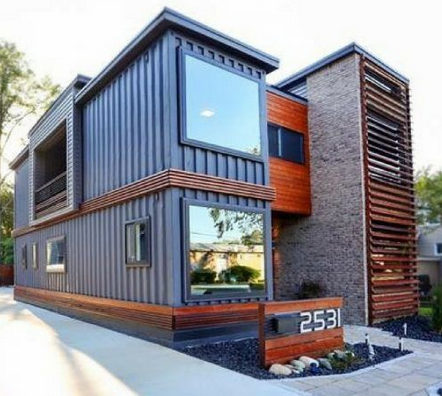 posted on Oct, 18 2019 @ 07:07 PM
link
Australian Army had a requirement for their trucks to have the half ISO (I think) and these would contain mini surgery, mobile comms and a whole his of other things.

So you have one truck with multiple uses.

The containers also met a navy requirement to allow ships hangars to have these for additional bedrooms and other things.

Not sure what happened to that project but it was a tender phase when I left.