US Space Command will launch this month, ahead of Trump's Space Force.

posted on Aug, 20 2019 @ 07:48 PM
link
US Space Command will launch this month, ahead of Trump's Space Force,
That's what it says.....?
Of course we know that the US government wanted to get their hands on Britisher, Gary McKinnon in the early 2000's for hacking into the Pentagon, and part of his assertions then was that there already was a space command in hand, however the UK eventually declined to hand McKinnon over then....so just McKinnon being imaginative, rather than talking about what he had seen?

There you go then, on the same day as Trump is talking about tax cuts, Trump wants to start a space command, that may or may not already exist..hilarious at best/worse.

Anyway I place the thread into military projects, away from the crazy politics.

McKinnon extract from the link,

'Gary McKinnon: Searcher Of UFO Data, Hacker Of Top Secret U.S. Information
In the early 2000s, Gary McKinnon, another British citizen who was fascinated with UFOs, hacked into more than 2,000 Pentagon computers, including those used by the military and NASA. He was searching for proof of UFOs and alien existence. He found rosters and tables for the organization and for the development of a secret space fleet. According to McKinnon, he also found evidence that an “inexhaustible source of power” existed for these secret spaceships'

Is this the use of the tail wagging the dog?

posted on Aug, 20 2019 @ 08:19 PM
link
The gary mckinnon story i found really Interesting, imagine hacking into those computers at NASA.

Around the same time there was another story around (if my memory serves me right), it involved a nasa employee walking into a room and there on the big screen was live feed video of an astronaut in a 'black' suit?? Stood in the cargo bay of the shuttle with the doors open.

Although most people take this with a pinch of salt, its very possible that a 'space force' has existed for a long time.

Declaring a 'space force' now just allows more launches that they dont have to explain. Anything that goes on up there will now be ' need to know only'.

originally posted by: buckwhizzle
A thread from one of the best:

I remember it, not too long after I joined what was the real ATS..

posted on Aug, 20 2019 @ 08:56 PM
link
They have had a Space Command for 20+ years inline with the secret (20-30 years ahead of public knowledge) advancement of technology. It makes sense what Gary said he saw. If your tech is 20-30 ahead of what the public domain understand then other functions and processes would be also!

Not all that is seen is ET/ID some of it is our own and monkeys are not the pilots!

Except they're not. There are areas where the civilian world is ahead of the military. The areas they're ahead, it's at best 8-10 years.

This is true, the 20-30 year roll out. What we think is advanced was developed decades ago. Drone tech for example has been around a long time. The FA/18 Hornet could be controlled remotely in the 80's. They have since scaled it down and made it much cheaper to operate. Same for GPS. Been around since the late 60's.


I love this meme, makes me chuckle. 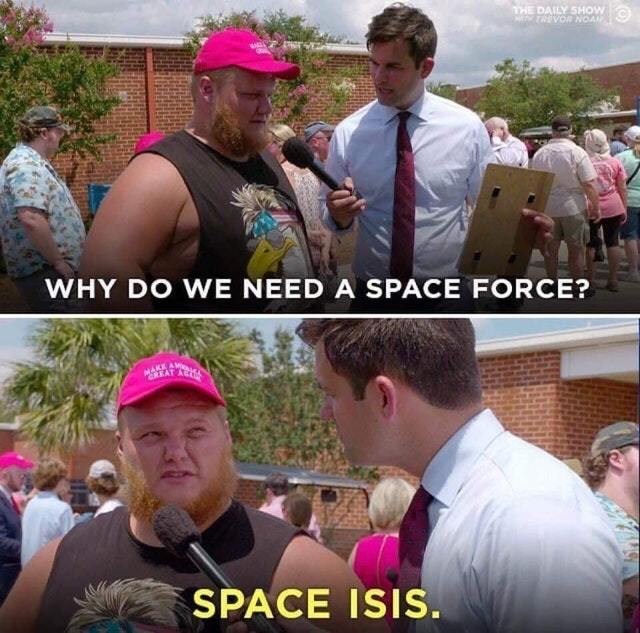 originally posted by: Zaphod58
a reply to: smurfy

'Space force' is the operative expression/statement/declaration, whatever, it's probably illegal in international law.

As for Trump's view,
President Trump is quoted as saying, “It is not enough to merely have an American presence in space. We must have American dominance in space.” Several weeks later, when speaking at the Pentagon, Vice President Pence backed the President’s view, asserting, “…our adversaries have transformed space into a warfighting domain already. And the US will not shrink from the challenge.”

Yuh see, now't is so simple.
Pence of course was talking shiite...except in the case of conventional weapons, not WMD.
Russia, China have used CW in space, to shoot up their own equipment however, a bit of a feck up for all concerned, but it happened, and probably not to be repeated unless ultimately needed.

US Space Command will launch this month.

Sounds like great timing with the storm area 51 festival, 20th September is a month away. The light show should be amazing.

Already, we have misconceptions about our abilities both current and upcoming.

We already have space assets, but a bonafide branch specifically for Space all on its own with the same exposure as all the other branches, I think that's what Trump was referring to.

And if we sit on our thumbs doing nothing, then if the time comes that we need to protect our satellites, we won't be able to. Just about everyone knows how much we rely on satellites and space as a big part of our warfighting doctrine. Anyone that's capable is developing an ASAT capability. China just recently launched a rocket capable of reaching orbit using a TEL, meaning its mobile.

Trump is right. The adage of the high ground holds true today just as much as ever. There's nothing illegal about a Space Force, even if they were to put troops in orbit. But having a force who is only concerned about defending our orbital infrastructure is a good idea.

originally posted by: Zaphod58
a reply to: Stupidsecrets

It wasn't perfected but GPS development started in the late 60's. For the longest time the precision was reduced for civilian application but eventually they lifted that ban. The military doesn't have new tech perfected I concede that but what actually hits the streets was developed a decade ago or more. Night vision for example, been around since WWII. Here is a video from a Vietnam era scope.

posted on Aug, 21 2019 @ 03:50 AM
link
Yesterday I watched the VP give a talk about the space program, it was first thing I thought of after seeing this thread and had to share. Following is a quote and link to the video;

Vice President Pence chaired the sixth public meeting of the National Space Council at the Smithsonian’s Udvar-Hazy Center in Chantilly, Virginia. At the top of the meeting, the vice president delivered remarks on the importance of space exploration to both public and private sectors. Afterward, a number of government officials delivered reports on how their agencies were working toward goals of enabling a return of a U.S. manned mission to the moon, and later exploration of Mars. Afterward, a panel of private industry representatives talked about their efforts toward those same goals.