Q will not be posting again until after the owner/admin of 8chan testifies before Congress on September 5th.

Thank you -- good to know and saves me some effort.

I guess it makes sense.


Q will not be posting again until after the owner/admin of 8chan testifies before Congress on September 5th.


Were the Q postings on an 8 chan board?

Yes..that is the only place Q posted. From there, they were re-posted to several other locations, like: qmap.pub...

That will be on one of the late nite teeeveee shows---probably Stephen Colbert.

Unfortunately, that wouldn't surprise me in the least...

But oh lordy I hope not!

posted on Aug, 18 2019 @ 08:11 AM
link
In the middle of the island there is a restaurant called " therapist pizzeria " anyone seen any reviews of this place?

originally posted by: OldToby
In the middle of the island there is a restaurant called " therapist pizzeria " anyone seen any reviews of this place?

I had not heard about that. But doing a little searching, I did find a couple references to it, and even a Google listing for "Little St James Island + Therapist Pizzeria." The reviews were all written in the last few days though -- since Epstein's demise.

I'm pretty sure this is a bad joke from whoever started it.

That's why Trump has been trying to teach us to be discerning when it comes to our daily intake of news fodder. FAKE NEWS is real. He has known it and seen it long before he became president.

It's a hard habit to break. We have been conditioned to trust certain legacy news media, but they have no qualms about putting fake news and misinformation out there for us to gobble down. IMO, the NYT and WaPo have become more propaganda machines than real news dispensers.

Learn to evaluate the information. Did the news source include a video interview? Is there corroboration on a .gov site?

In other words, don't believe everything you read or hear anymore. Sheep no more.

NYT and WaPo are pandering to their readership to stay relevant.

They already both lost a ton of readers. Rather than go to the right, they went further to the left and gobbled up market share so they don’t go out of business.

In my mind it is propaganda... but it’s for the sake of profit That ultimately results in some social engineering.


originally posted by: KKLOCO
I totally agree with your statements. Almost every piece of info we have is unsubstantiated. It’s a disinformation campaign at its finest. But how can we expect anything less, considering Epstein was obviously connected — most likely CIA.

Funny you should mention CIA. I found this yesterday in an article from 2001:


Epstein "has a license to carry a concealed weapon, once claimed to have worked for the CIA--although he now denies it--and owns properties all over America," Rosser noted.

And if you have some time and the inclination for a long but very informative read, check this out:
Mega Group, Maxwells and Mossad: The Spy Story at the Heart of the Jeffrey Epstein Scandal

As predicted, the MSM is slowly moving away from the story. Soon, we won’t even hear about Epstein in the MSM.

Sounds about right... establish the story, then move away before too many questions are asked...

By the fact that Ghislaine is still walking the streets of LA, and not incarcerated, speaks volumes. Her grandiose re emergence — reading a bizarre book on the CIA, was obviously a message to the public. Which IMO, was her clearly implying that Epstein was CIA. But tomorrow, she will be at McDonald’s, free as a bird — and no one can understand why.

Yeah, I'm not convinced that's even Ghislaine... just a little too convenient for me. But I haven't had time to check it out too closely yet.

None of it makes sense.

Not unless we consider it one huge disinfo cover story for the benefit of the masses.


I agre with you

I agree with you

And, well, these foolish critters got too cocky and too predictable!


Jeffrey Epstein’s Will Leaves $577 Million to Mysterious Trust
Which he signed two days before his death.


Jeffrey Epstein signed his last will and testament on Aug. 8—two days before the 66-year-old sex-offender killed himself in his Manhattan jail cell.

Or this trust is a way for him to access his money IF this was an escape operation?

originally posted by: Willtell
Here is a fact.

Jeffrey Epstein’s Will Leaves $577 Million to Mysterious Trust
Which he signed two days before his death.

Jeffrey Epstein signed his last will and testament on Aug. 8—two days before the 66-year-old sex-offender killed himself in his Manhattan jail cell.

You beat me to it -- I just posted a link in another thread and was coming to post it here... great minds, right?

I'm actually not surprised he filed a will. I would expect his attorneys to advise him to do so.

But the whole beneficiary thing is weird. I don't understand the point about his brother not being a heir without that paper signed. Is that because it's a trust? So is his brother the beneficiary?

Or does this allow Epstein (or someone) to also access this trust?

Was this filed after a false (witness protection) identity was created and added to the trust/listed as a beneficiary?

Maybe I don't know what I'm talking about... but it's all weird.

This probably deserves a thread of its own, but I didn’t want to add to the many we already have.

I also posted this in another thread, it's very interesting, to say the least.


I mean IF he were alive would this be a way for him to access his money?

Here is another section mentioning the Trust:

Another section mentioning the Trust: 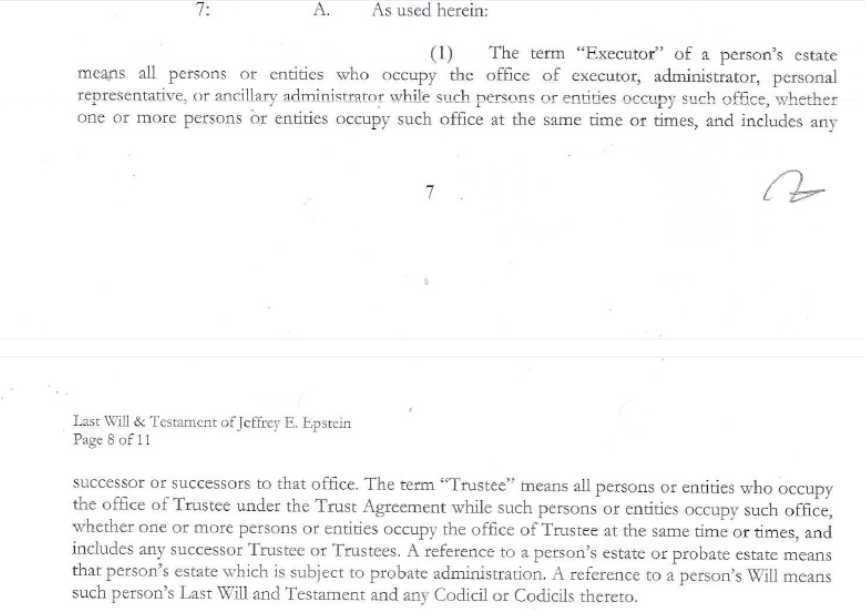 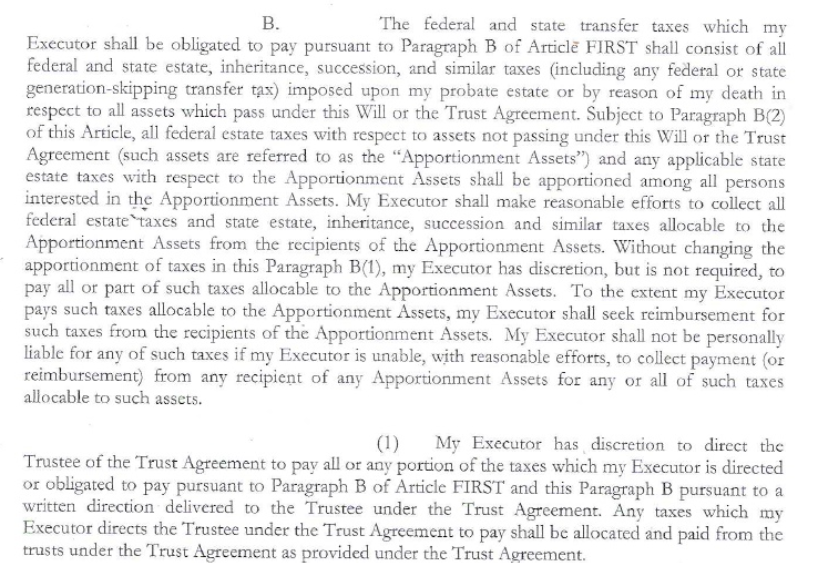 And the final page is his death certificate: 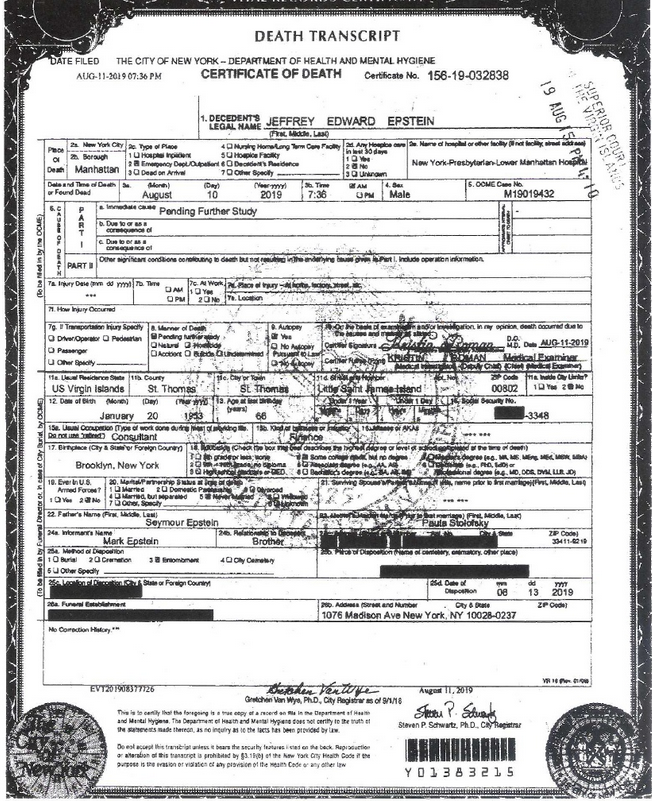 I note that the executors hired a Virgin Islands law firm to probate the will and that Epstein's primary place of residence is listed as the Virgin Islands on the death certificate. Maybe things are different in New York, or due to the fact that this was such a high profile death, but when my father passed away a couple of years ago, it took a lot longer than a few days to get a certified death certificate.

Also have been trying to find out something concrete on the Trust and have been unable to as of yet, but I did find that there are a set of Trust laws dealing with Trusts that were created in 1953 and that there have been several cases in which trusts are called, " the 1953 Trust." Not being a trained legal professional, I'm unable to determine what the specifics are that may make this distinguishing characteristic important but I feel that it is something that needs a closer look.
edit on 19-8-2019 by jadedANDcynical because: extra comment about 1953 Trust and legal precedent.

posted on Aug, 20 2019 @ 04:50 AM
link
Quick consideration regarding the "great spirits" report. Suicidal people will often appear happy in the days / weeks prior to their demise. Not to disagree with the conspiracies here, I totally believe he was "suicided" or is under protective custody.