What does it mean to be human? Do morals and rational thought distinguish the human race from other organic lifeforms, or is that wishful thinking of proud Man? Do human creativity and ingenuity set us apart from our animal peers, or are we merely clothed beasts? These questions have been hotly debated by various factions, weighed by philosophers, scientists, clergy, and more, but solid answers remain elusive.

We’ve now developed technology with the potential to permanently alter humanity, which is why finding a satisfactory answer to the above question is more important than ever. The boundaries between man and machine are becoming blurrier-- our society seems to be adapting to the machine more than the other way around. And now recent scientific developments have enabled researchers to cross human and animal cells and create a viable monkey-human embryo.

Juan Carlos Izpisúa Belmonte (pictured below) and a team of researchers used CRISPR technology to block certain cells from forming in a monkey fetus, to implant human cells to replace the inhibited monkey cells, and create a viable human-monkey fetus. They aborted the fetus within 14 days before the creature’s central nervous system formed. Belmonte has previously had small successes with human-pig hybrids (although the human cells did not take nearly as well with these, he was able to successfully implant pigs with embryos that contained both pig and human cells). According to this Natural Geographic article on the subject,


In all, the team created 186 later-stage chimeric embryos that survived, says Wu, and “we estimate [each had] about one in 100,000 human cells.” 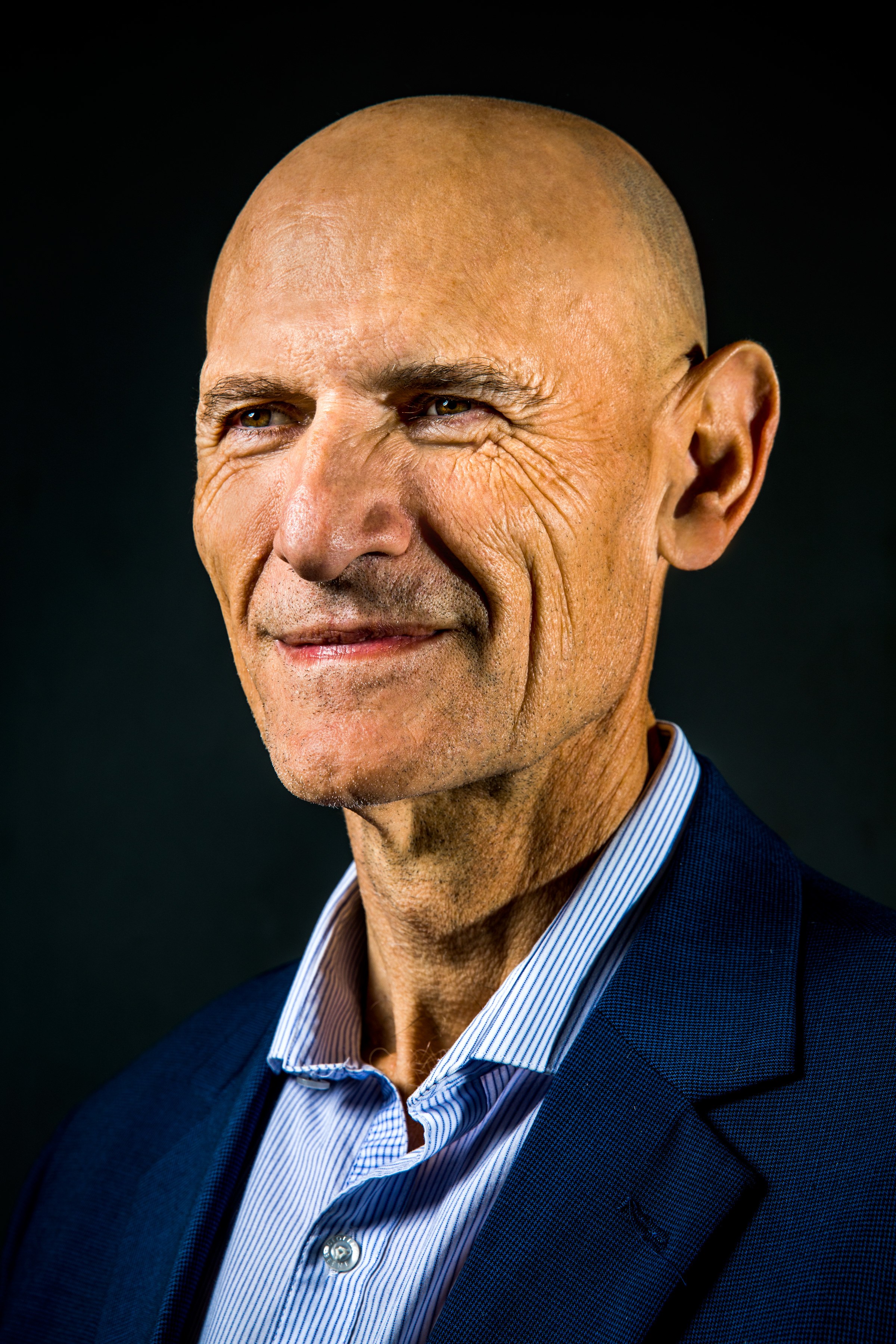 The latest attempt was much closer to Belmonte’s goal, which is to grow human organs to harvest from animal hosts.

Others, including one man who had previously worked on human-pig chimeras(Pablo Ross), are sceptical. Mr. Ross believes that monkeys are too small and develop organs too slowly for this procedure to ever be an efficient way to grow/harvest human organs. Dr. Angel Reya seems to be in favor of the experiments but not for the reasons presented. According to El Pais, a Spanish newspaper,


“Raya is skeptical about the possibility — in any case very far away — of turning animals into organ incubators for humans, but considers that these investigations will be very useful to obtain models in which to study embryonic development and some diseases of people,” El Pais wrote.


A central point of their argument is that crossing species boundaries between humans and animals might conjure up an inexorable moral confusion: Human–animal mixtures, they claim, stand in between two groups with qualitatively different moral status; that is, human beings, enjoying their moral status independent of other people’s wishes and intentions (absolute, full moral status), and animals, whose moral status is at least partly contingent on the wills and attributions of human persons (relative, conditional moral status).

In order to understand the above quote, I think it might be important to remember the incontestable moral depravity of human experimentation. While it’s hard for so many to agree on anything these days, I’m fairly certain that we can all agree with this-- our sensibilities utterly reject human experimentation and those who have engaged in such have always been roundly condemned, held as a measure of human evil/depravity.

While animal experimentation is subject to open debate, no sensible person would stomach an argument put forth in favor of using humans as subjects in labs.

The paper I’m quoting from defines their terms in this way:


I will not endeavor to elaborate which kinds of HACHs might actually prove problematic in view of the argument I present. Clearly, not all human–animal mixtures are adequate targets of criticism. The prevalent positions in the bioethical debate vary widely with regard to the types of HACHs whose creation and use they regard as objectionable. Similarly, the paradoxical intertwinement of ISAs and GSAs that I try to unfold in this paper will only be conjured up by certain kinds of HACHs. It is not my purpose here to investigate in more detail which HACHs actually have this disturbing effect. This paper is supposed to outline a general structure of arguments, not to anticipate details of their concrete application. Correspondingly, I will restrict myself to formulations like “sufficiently human,” or “relevantly human-like,” in order to address HACHs that stand effectively between human beings and animals and thus may have the antinomical implications I want to carve out.

The paper puts forth this moral issue:


A closer look reveals that, curiously, moral intuitions concerning relevantly human-like HACHs seem to point in opposite directions. On the one hand, there is a strong presumption that such beings deserve special protection, possibly to a higher degree than unmodified animals, by virtue of their human portions: they should be spared damage and exploitation, and they may even be entitled to an adequate environment and targeted support to allow for a proper development of their respective capabilities. On the other hand, the idea of such beings arouses serious feelings of rejection, suggesting that they would establish something utterly wrong in the natural and/or social order: they should not exist, thus not be created in the first place, and if they come into being they should preferably be terminated, ideally at some early point in their development.


Right now, the pioneers in this field are still constrained by reservations. Will that always be the case, or is a real-life Dr. Moreau in our future?


From him my eyes travelled to his three men; and a strange crew they were. I saw only their faces, yet there was something in their faces—I knew not what—that gave me a queer spasm of disgust. I looked steadily at them, and the impression did not pass, though I failed to see what had occasioned it. They seemed to me then to be brown men; but their limbs were oddly swathed in some thin, dirty, white stuff down even to the fingers and feet: I have never seen men so wrapped up before, and women so only in the East. They wore turbans too, and thereunder peered out their elfin faces at me,—faces with protruding lower-jaws and bright eyes. They had lank black hair, almost like horsehair, and seemed as they sat to exceed in stature any race of men I have seen. The white-haired man, who I knew was a good six feet in height, sat a head below any one of the three. I found afterwards that really none were taller than myself; but their bodies were abnormally long, and the thigh-part of the leg short and curiously twisted. At any rate, they were an amazingly ugly gang, and over the heads of them under the forward lug peered the black face of the man whose eyes were luminous in the dark. As I stared at them, they met my gaze; and then first one and then another turned away from my direct stare, and looked at me in an odd, furtive manner. It occurred to me that I was perhaps annoying them, and I turned my attention to the island we were approaching.

In my opinion, if the difference in human and animal gestation period, development, and size are hindrances and this research is being carried out for the sole purpose of observation and trial and error (as according to Raya’s opinion above) the potential for serious ethical violations is too great and this type of research should be permanently tabled.

I’m sure it won’t be though. Since we can, we will.

What are your thoughts, friends?

That's what I thought

Thanks for weighing in.

Humans are the only species that will intentionally do harm and cruel things to others, to prolong their life in an unnatural way.

Because we can, exactly.

To me, the mere thought of creating beings for the purpose of harvesting their organs for our own benefit is frightening. But it’s another sign of man’s hubris.


To me, the mere thought of creating beings for the purpose of harvesting their organs for our own benefit is frightening. But it’s another sign of man’s hubris.

This is a point I wish I had brought up, as I am in complete agreement with you on this one.

If ethics is no problem, why go through the hustle to breed chimeras for organs?

The world we were introduced into requires something to die in order for something else to survive. I'd say our ideal relationship to the other creatures in this world is either as hunter/gatherers or through farming/husbandry (on a small, not an industrial, scale).

But no one who could make a difference cares what I think... why should they?
edit on 3-8-2019 by zosimov because: (no reason given)

originally posted by: Phage
a reply to: zosimov

I see a difference there. Eating an organ or meat is not the same as putting harvested organs inside you to become part of your body.

originally posted by: NoClue
a reply to: schuyler

If ethics is no problem, why go through the hustle to breed chimeras for organs? Breed humans...

China apparently does. I was not saying ethics is not a problem. I was saying ethicists are. They apparently feel they have a better handle on proper ethics than the rest of us, and you know they will object to anything brought up which involves an ethical issue. I just think we should not give them that much power.

originally posted by Phage: We breed animals to eat, using hybridization. Is that not the same thing?

Yes. We can create a cocker spaniel out of a wolf by selective breeding. If we can do the same thing with advanced techniques, I see no real difference at all. In one we manipulate using the engine of nature; in the other we just use CRISPR.

Every time you eat beef (if you do, of course) you are eating an animal which was specially bred to produce meat as efficiently as possible.

Ethics is a human concern though and despite often having the numbers in its favor (consider, for example, the number of those who want to hold our politicians to a standard of ethics) the bulk of the power is in the hands of those willing to push the bounds.

We breed animals to kill for our benefit. I see no qualitative difference.

Just because we can do something never means we should.

This is a moral test that our species is failing.

originally posted by: Phage
a reply to: BuckyWunderlick

Every time you eat beef (if you do, of course) you are eating an animal which was bred to produce meat.

That’s quite different than creating chimeras for human organs.

posted on Aug, 3 2019 @ 02:03 PM
link
a reply to: Phage
If you want to reduce it to simply killing and do not make a difference in the reason, yes, your words are not wrong I guess.