Science has provided evidence of the non physical universe

that could explain reincarantion. if we are spirits, maybe even our spirit selves cannot escape the black hole. we are just sucked back on to the earth.

so i have personal evidence of spirits. the guy was alive at the point of the haunting, so technically was not dead, so it was not a full on ghost.

posted on Jul, 26 2019 @ 04:16 PM
link
It may be pointing to the idea that our reality is a simulation. Spooky Action is just observation of the attributes of a piece data within it.

reword sentence
edit on 7/26/2019 by roadgravel because: (no reason given)

originally posted by: roadgravel
It is point to the fact that our reality is probably a simulation. Spooky Action is just observation of the attributes of a piece data within it.

Always happy to get your take on things roadgravel, but it makes no sense to say "fact" and "probably" when referencing a singular idea. Its either factual, or probable. It can not in reality be both, unless reality is indeed a simulation, in which case, it can not be reality.

Do you understand the ramifications here?

Poor sentence structure on my part.

Possible. A simulation can be our reality. We think we know reality but what we believe may not be. This subject points to that.

Other people have other beliefs.

Real may not be what some define as real.
edit on 7/26/2019 by roadgravel because: (no reason given)

In all seriousness, when the concept of simulated reality initially came out, I dismissed the idea as being ridiculous.

The more I thought about though, I came to the conclusion that it is a possibility. Although, I don't consider it probable, the very idea is quite thought provoking.

For instance if some advanced being wanted to run a million simulations to quantify the odds of a particular outcome, a million of our lifetimes of interactions with trillions of different variables could be played out in an instant of their relative time. If time is even real in that scenario.

I don't think of it as the most likely situation but I don't close the door on it.

posted on Jul, 26 2019 @ 06:33 PM
link
You are making huge assumptions. But that aside I'd argue they created the communications between the two points by reading the paper. Notice for one thing took 5 hours to send 100 bits of information.

Why you may ask simple they send a bit then tell the other person they saw it and send the next. If you read the paper problem was most of the time there was no detection. So alot of I didn't see it resend it please.

posted on Jul, 26 2019 @ 07:45 PM
link
If humanity want to quantify telepathy/out of body/energetic body states then it is possible by measuring the effects on the body. This can be done with enough samples/people to understand subjectivity and how different beliefs changes the outcome. This can be objectivly understood if humanity want to find out.

Materialism have all the characteristics of a false religion since it cannot handle entanglement that was proven long ago. Telepathy do not break any speed limit since the information do not travel thru a medium. Instant wormhole communication do not have any speed.

China is using entanglement for cryptation now with satelites. Is it not time for all humanity to accept entanglement and all the effect that follow and let go off the missguided materialistic ideas. Many scientist today are more like the inqusition that went after Galileo than true objective truth seekers.

For years I have been saying that what we call subatomic particles are really pixels on the space-time screen. Entanglement and non locality destroys any notion of local realism or any objective physical reality.

Death by experiment for local realism

A fundamental scientific assumption called local realism conflicts with certain predictions of quantum mechanics. Those predictions have now been verified, with none of the loopholes that have compromised earlier tests.

You can write a program where you have swirling red dots interacting with each other and when 2 dots get entangled, whenever you click on 1 dot the one it's entangled with instantly turns green. It does this on a computer screen and subatomic particles as pixels does this on the space-time screen.

When you look at counterfactual communication you have a bitmap being sent without a physical medium. The information goes from A to B on the phase of the wave function which is real but non physical. It can't be observed and it can't be physical. You can't observe spin up/spin down at the same time. Like I said, if the phase of the wave function is physical what is it made of?

This could mean the universe is the projection of a 2D image. This would mean the 3rd dimension is an illusion. Here's an example of turning a 2D bitmap image to a 3D surface.

The first image shows a monochrome(black&white) bitmap image close to equilibrium so to speak. You can see there's not much difference in the 2D bitmap image so when it's projected onto a 3D surface, there's very little change in the image. 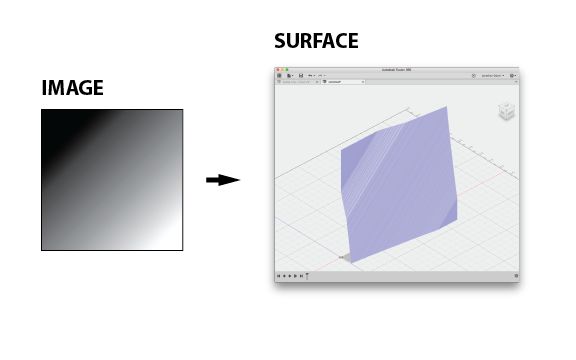 Now, when you change the 2D bitmap image and it's far from equilibrium so to speak, when the 2D image is projected on a 3D surface it has the illusion of depth. 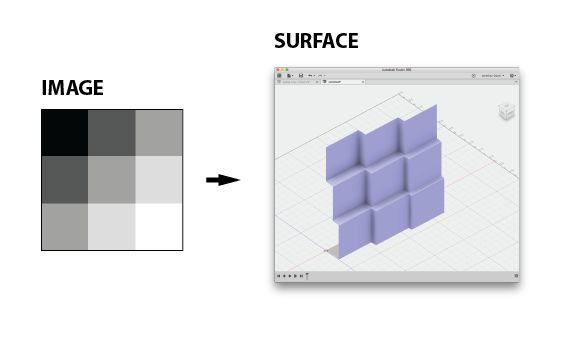 So, our universe is just an illusion or a projection of information on a 2D surface. Here's a video of different Scientist talking about the 3rd dimension as an illusion.

When you look at this experiment, it could mean the information on the event horizon of a black hole could be a a 2D bitmap image that's projected as a 3D universe. It's projected by the quantum computer universe. Here's M.I.T. Professor Seth Lloyd saying the universe is a Quantum Computer.

We also have Scientist saying that space-time is an error correcting code.

How Space and Time Could Be a Quantum Error-Correcting Code

The same codes needed to thwart errors in quantum computers may also give the fabric of space-time its intrinsic robustness.

Also, Researchers are saying space-time around a black hole acts like Quantum Gates!!

According to a theoretical paper published in the Annals of Physics, by Dr. Ovidiu Racorean from the General Direction of Information Technology in Bucharest, Romania, the geometry of spacetime around a rapidly spinning black hole (Kerr black hole) behaves like a quantum computer, and it can encode photons with quantum messages.

There's nothing, let me repeat NOTHING that supports the notion of an objective physical reality.
edit on 26-7-2019 by neoholographic because: (no reason given)

originally posted by: Woodcarver
a reply to: neoholographic

Smh....... Particles and waves are both considered physical.

Even when we are talking about entangled particles, we don’t know how the information is passed from one to the other, but at no point does anything we have ever observed point to a non-physical explanation.

You see a gap in understanding and you’re trying to push ghosts and spirits into it. Give it up.


Again, you didn't understand the paper and you had no response and yes, the non physical aspects of reality have been confirmed.

The experiment sent a bitmap from point A to point B without a physical medium. It sent it on the phase of the wave function which is non physical. I ask again:

IF THE PHASE OF THE WAVE FUNCTION IS PHYSICAL WHAT IS IT MADE OF?

Is it atoms, magic matter, what?

Secondly, entanglement has been clocked at 10,000 times the speed of light.

Quantum "spooky action at a distance" travels at least 10,000 times faster than light

Quantum entanglement, one of the odder aspects of quantum theory, links the properties of particles even when they are separated by large distances. When a property of one of a pair of entangled particles is measured, the other "immediately" settles down into a state compatible with that measurement. So how fast is "immediately"? According to research by Prof. Juan Yin and colleagues at the University of Science and Technology of China in Shanghai, the lower limit to the speed associated with entanglement dynamics – or "spooky action at a distance" – is at least 10,000 times faster than light.

Einstein's spooky action acts at 10,000 times the speed of light

Now, by making measurements in two Swiss villages separated by 11 miles, Daniel Salart, a doctoral student working with the team of Prof Nocolas Gisin at the University of Geneva, has run detailed measurements and concluded that if this spooky action really exists, it must act faster than light.

The new work lays down a lower speed limit of 10,000 times the speed of light. Quantum weirdness still rules OK.

This study in the journal Nature suggests that a physical signalling mechanism that connects the villages is deeply implausible, because of the well known limit of the speed of light.

A PHYSICAL MECHANISM WOULD BE IMPLAUSIBLE!

Entanglement is evidence of a non physical reality or it would violate Relativity.

If subatomic particles are pixels on a space-time screen, then entanglement is easily explained.

If I build a program of swarming red dots, and I write in the program whenever 2 dots get entangled, when I click on the red dot the dot it's entangled with turns green. This will happen instantly. So if subatomic particles(pixels) are following the rules of the program and doing error correction, then again, objective physical reality is shattered.


That's why I brought up the old '1 particle theory' because it touches so closely on the concept.


Now that makes a lot of sense, and without the presence of time, there is no distance.

What created "Time" and gave it it's momentum constant?, because without that, nothing is.
What if time sped up or slowed down, would we even notice?

Sorry for babbling, Time for me to go

The answer of this question would easily explain the nature of the universe.
-ego

posted on Jul, 30 2019 @ 02:20 PM
link
Simulation theory can explain this. The processing is done outside of the ‘game world’. You could easily send information from point A to point B within a simulation or video game and the information is processed outside of the simulation and put back in at a completely different point, therefore it is seemingly instant and with no travel or carrier. Beings within the simulation would see the encompassing reality as non-physical, and vice versa. The simulation isn’t a literal computer simulation but the idea is the same, just with consciousness as the processor.

I think we have naturally evolved technology into the computers we have today because it’s how reality works. Our computers are mimicking reality, not the other way around like some people tend to think. We aren’t some video game on an alien’s hard drive. Reality is fundamentally information based.

doesnt mean there isnt a higher law or system governing this which we at present cannot detect or comprehend !


Im very much in agreement with the hermetic understanding of the universe !

the all is mind , the universe is mental

the principle of Vibration - The Kybalion

If an attribute for paired entities such as spin can only have two values and must differ then storing the spin state for one also gives the state for the other. If the first is A then the second is B. "Reading" the same piece of data (value) gives the instant effect.
edit on 7/31/2019 by roadgravel because: typo