posted on Jun, 22 2019 @ 10:53 AM
link
Andy Burnham is an overactor who betrays his double dealing with absurd facial expressions. 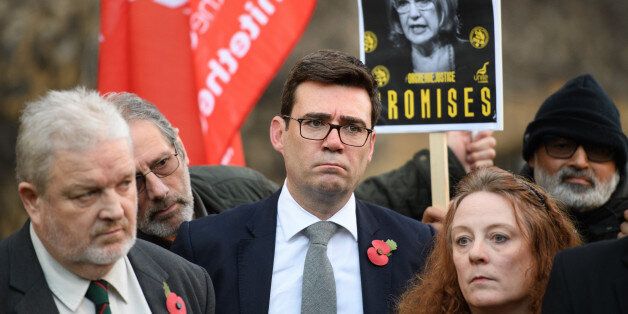 His failure to act in the public interest regarding the Mid Staffordshire NHS Trust has been well documented.


Health secretary Andy Burnham has defended his decision to stop short of launching a full public inquiry into failures at Mid Staffordshire foundation trust, telling HSJ he thought it would be “distracting to managers”.

Mid Staffordshire: Andy Burnham Was Either Incompetent or Negligent

Yesterday Andy Burnham stood before Parliament and, with incredible chutzpah, accused the government of failing to fully respond to the Francis report. This is, lest we forget, the report that he never wanted, about the NHS trust he so catastrophically recommended for Foundation Trust status.

www.huffingtonpost.co.uk...
Not incompetent or negligent, just acting his allotted role in a cover-up.


The relatives of those treated at Stafford Hospital, where between 400 and 1,200 people died through a lack of care between 2005 and 2009, claim Labour politicians at every level ignored their calls to investigate systematic neglect.

They have singled out Andy Burnham, the former health secretary, for criticism, arguing that he put forward Mid Staffordshire NHS trust, which runs Stafford, to be considered for elite foundation trust status without first checking its safety and quality.


. . . Andy Burnham derided the appointment of a powerful chief inspector with the authority and judgement to call out problems as 'heavy-handed regulation'. He calls it 'heavy-handed'; I call it 'speaking truth to power' . . .


Shame that you weren't quite so concerned about Mid Staffs when you had a chance to make a difference.

Empty rhetoric is his way.


The mayor of Greater Manchester, Andy Burnham, has pledged to make the region carbon neutral by 2038,more than a decade earlier than the target date adopted by the European commission, at the unveiling of a new industrial strategy.

But Burnham was quickly accused of peddling “empty rhetoric” because of the regional authorities’ majority stake in Manchester airport, which aims to double passenger numbers over the next 20 years, and plans to spend £6bn on new roads.

www.theguardian.com...
He's struggling to control his facial expressions here at 2:00 till 2:20.

If he was truly campaigning for Orgreave and Hillsborough justice he'd emphasise the part Assistant Chief Constable Walter Jackson played in both.


It can now be reported, because it was referred to in the Hillsborough inquests’ legal arguments, that the Orgreave internal review was written by Walter Jackson. He was a senior officer in 1984-86, then in 1989 he was the South Yorkshire police assistant chief constable for operations. Jackson is one of the former senior officers currently subject to IPCC investigation into Hillsborough for his role on the day and the force’s response afterwards.

Andy Burnham is a deep state tool who, I believe, is now being primed to play a part in future False Flags. Watch this man.

Andy Burnham is one of Blairs boys so always open to incompetency and cover up, always reminded me of a ventriloquist's dummy.

But Burnham was quickly accused of peddling “empty rhetoric”


Did a lot of that when he was in office.