The stark difference between the Moon’s heavily-cratered farside and the lower-lying open basins of the Earth-facing nearside has puzzled scientists for decades.

Now, new evidence about the Moon’s crust suggests the differences were caused by a wayward dwarf planet colliding with the Moon in the early history of the solar system. A report on the new research has been published in AGU’s Journal of Geophysical Research: Planets.

The mystery of the Moon’s two faces began in the Apollo era when the first views of its farside revealed the surprising differences. Measurements made by the Gravity Recovery and Interior Laboratory (GRAIL) mission in 2012 filled in more details about the structure of the Moon — including how its crust is thicker and includes an extra layer of material on its farside.

There are a number of ideas that have been used to try and explain the Moon’s asymmetry. One is that there were once two moons orbiting Earth and they merged in the very early days of the Moon’s formation. Another idea is that a large body, perhaps a young dwarf planet, found itself in an orbit around the Sun that put it on a collision course with the Moon. This latter giant impact idea would have happened somewhat later than a merging-moons scenario and after the Moon had formed a solid crust, 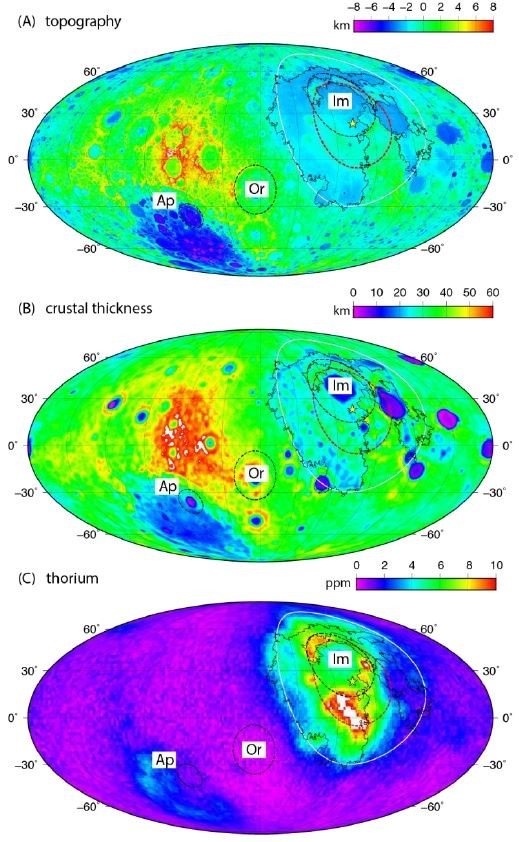 The new findings from GRAIL gave Zhu’s team of researchers a clearer target to aim for with the computer simulations they used to test different early-Moon impact scenarios. The study’s authors ran 360 computer simulations of giant impacts with the Moon to find out whether such an event millions of years ago could reproduce the crust of today’s Moon as detected by GRAIL.

They found the best fit for today’s asymmetrical Moon is a large body, about 480 miles (780 kilometers) in diameter, smacking into the nearside of the Moon at 14,000 miles per hour (22,500 kilometers per hour). That would be the equivalent of an object a bit smaller than the dwarf planet Ceres moving at a speed about one-quarter as fast as the meteor pebbles and sand grains that burn up as “shooting stars” in Earth’s atmosphere. Another good fit for the impact combinations the team modeled is a slightly smaller, 450-mile (720-kilometer) diameter, object hitting at a mildly faster 15,000 miles per hour (24,500 kilometers per hour).
...
The giant impact model also provides a good explanation for the unexplained differences in isotopes of potassium, phosphorus and rare-earth elements like tungsten-182 between the surfaces of the Earth and Moon, the researchers explain. These elements could have come from the giant impact, which would have added that material to the Moon after its formation, according to the study’s authors.


So nothing exactly earth-shattering (moon-shattering?), as these ideas have been tossed about for ages, but it is interesting to see the gravimetry from GRAIL being used with soil -sampling to try to create more comprehensive modeling. We're moving slowly away from "it was probably this or that" towards "an abundance of data is most consistent with this, not that".

I especially like their visual which shows how well the different data sets complement their specific hypothesis.

GRAIL, by the way, is the Gravity Recovery And Interior Laboratory . They are essentially hoping to use gravimetry to make educated guesses about the Moon's interior structure.

posted on May, 22 2019 @ 01:59 AM
link
Fascinating detail on this topic to me was that I learned about some major differences between Earth's crust and this part of Luna's crust - previously, I was taught that there were no big differences and that that was a proof of Luna being a part of a primordial Earth.

Now, that knowledge is obsolete. I wonder what else?

I haven't heard the rogue dwarf planet theory before, I thought the accepted theory currently was 2 moons formed from a massive collision of 2 planets (proto-planet earth and theia) and the thicker crust on the far side was the result of the two proto-moons colliding and forming the current moon we have.

Cool thread and links! Checking them out now.

originally posted by: RadioRobert
So nothing exactly earth-shattering (moon-shattering?), as these ideas have been tossed about for ages

Maybe this idea has been around but I hadn't seen it publicized until now.

As Vector99 said I heard of twin proto-moons merging idea, but that's a little different than another body outside the Earth-moon system like this one. I think we are still guessing somewhat but our guesses are getting more sophisticated, backed by simulations to show how feasible the guesses are.

Back in 2011, NASA said the cause of the asymmetry is "up for debate".

Then in 2013, Scientific American published an article saying the near side of the moon may have been hotter than the far side, and so even if the moon was impacted from all sides, the hotter side of the moon facing the Earth was able to get maria formed which impacts hitting the colder far side didn't create. I thought that hypothesis had some potential especially since if the moon formed from a giant impact of a Mars size object striking the Earth, the Earth would certainly have been heated by that impact, and the moon was much closer to the Earth back then so heat radiating from the Earth might have helped make the near side of the moon warmer, maybe through infrared radiation, though the Scientific American article talks about radioactivity playing a factor. This article also mentions the twin proto-moons impact hypothesis.

That research was also from gravity mapping, and supported by simulations:

Simulations showed that if the largest dark area on the near side — the plain of volcanic rock known as Oceanus Procellarum — was hundreds of degrees hotter than crust on the far side, impacts there would produce basins up to twice as large as impacts from similar-sized bodies on the far side (see video below).

The latest "dwarf-planet-impact-hypothesis" article says they find the twin proto-moon scenario unlikely, but if they addressed this heat difference hypothesis in the Scientific American article from 2013, I didn't see that. I don't know if the true cause is still up for debate or not, but maybe the twin proto-moon hypothesis is out, which didn't really make sense to me anyway.

edit on 2019522 by Arbitrageur because: clarification

It's a long way to consensus. Everyone is just trying to get better and better modelling along with better and better data. I suspect that if you scale up the mass by a factor and reduce the relative velocities by the square of that same factor (ke=mv^2), there are a wide range of mass-velocity combinations which would still be consistent with their data.

As you allude, once they get a grasp on their own data, the next step would be trying to reconcile outside data to the model and/pr improving their model with variables they currently do not address.

I don’t think this changes that moon theory.. I think this happened next.


Brown University astronomer Peter Schultz announced today (July 20, 2016) that the object that slammed into the moon 3.8 billion years ago to create the great, dark lava plain we call Mare Imbrium was protoplanet-sized. That is, it was big – about twice as big and 10 times more massive than previous estimates – about 150 miles (250 km) in diameter. Schultz bases his estimate on hypervelocity impact experiments performed using the Vertical Gun Range at the NASA Ames Research Center, and on computer modeling. Schultz, professor of Earth, environmental and planetary sciences at Brown, said in a statement:

So this earlier study suggested a somewhat smaller impactor than suggested by this latest one.

originally posted by: RadioRobert
So this earlier study suggested a somewhat smaller impactor than suggested by this latest one.

Schultz's hypothesis seems to suggest multiple impacts, maybe one for each mare, which is what I always thought so I like his hypothesis which matches mine.

The article references detailed work he did to estimate one impact for the Mare Imbrium basin, but he and his colleagues clearly think other impacts formed other maria:

And he said his work suggests that – given the sizes of other impact basins in the moon, Mars and Mercury – the early solar system must have been well stocked with protoplanet-sized objects, which he calls “the lost giants.”...

Schultz and his colleagues went on to use similar methods to estimate the sizes of impactors related to several other basins on the moon created by oblique impacts...
Combining these new estimates with the fact that there are even larger impact basins on the moon and other planets, Schultz concludes that protoplanet-sized asteroids may have been common in the early solar system. He said:

"The large basins we see on the moon and elsewhere are the record of lost giants."

But the article doesn't mention any explanation of the assymetry between near and far side, so maybe the "hot near side" hypothesis would be needed to explain that asymmetry in light of multiple impacts instead of a larger one suggested in the OP article.