Morels are these weird brain looking mushrooms that grow here.

Morels are delicious and people are willing to pay a lot for them.
sheboygan.craigslist.org...

I went foraging and there were TONS of people. We've had a late spring but it seem everyone is out looking for two things.
#1 morels, #2 ramps. I guess it's good people are learning about the food around them, but can they go find their own secret spot!

I had ramps stir fried with elk and it was Amazing!!!

Our morel season ended a few weeks ago.

We had a big dinner with pounds of morels and plenty of people to enjoy. I'm not even big on mushrooms, but I'll tear up some morels.

Their texture and flavor profile is more meaty than mushroomy IMO.

Edit: If the hunts are coming up fruitless, try looking around orchards, morels love apple trees.
edit on 14-5-2019 by CriticalStinker because: (no reason given)


Ours is pretty much over this week. I've made them the past 3 weeks every weekend.

Tis the season here in Montana too.

In our sleepy little town we have two booths set up by out of state people that buy them for $15 a pound.

Same people set up the same booths in the fall to buy huckleberries at $30 a pound.

So we get out of state people that come and pick... for money.


Edit: If the hunts are coming up fruitless, try looking around orchards, morels love apple trees.

That's my secret, not so secret spot. Old tree farm.

Not my bag, mushrooms or going out picking to even sell, but it's fun if you're into it. The only problem I see is with the fervor surrounding the value. You get a bunch of idiots out trespassing on private property and causing problems.

originally posted by: Bluntone22
I found a few in my yard this year.
Score...


Now that there is so much money involved people are going crazy for them. Where my mom lives they do it for fiddlehead ferns. They have picked those almost to almost extinction in her area.

What do you want to bet people are picking morels from all kinds of sprayed areas and selling them.. Hipster chefs don't care. They just want to be able to claim "free range morels and ramps". YUCK!

originally posted by: chiefsmom
Good lord that is all I've been hearing about from the Hubby. He's been out looking at his usually "secret" spots, but I don't think he's found any yet.


Great now I am totally in the mood for grilled asparagus. mmmmm mmm! I love it with a little olive oil, a little salt and just a tad burnt.. YES! The only thing I really dislike is asparagus urine smell I guess not everyone has this, just like cilantro tastes like heaven to me and tastes like soap to other people.

posted on May, 14 2019 @ 04:04 PM
link
Morels are my favorite mushrooms. I keep forgetting to look for them in the spring around here. It finally got warm enough here for things to grow, although there are two foot high snowbanks on the side of the driveway in spots yet.

originally posted by: MagesticEsoteric
The first rule of morel hunting is... don’t talk about where you go morel hunting. Lol

Behind the back of my property line is a 2 million acre national forest.

So when anyone asks where they are, I just point and say "right out there".

Seriously though, just go to wherever there was a controlled burn or a forest fire the year before. 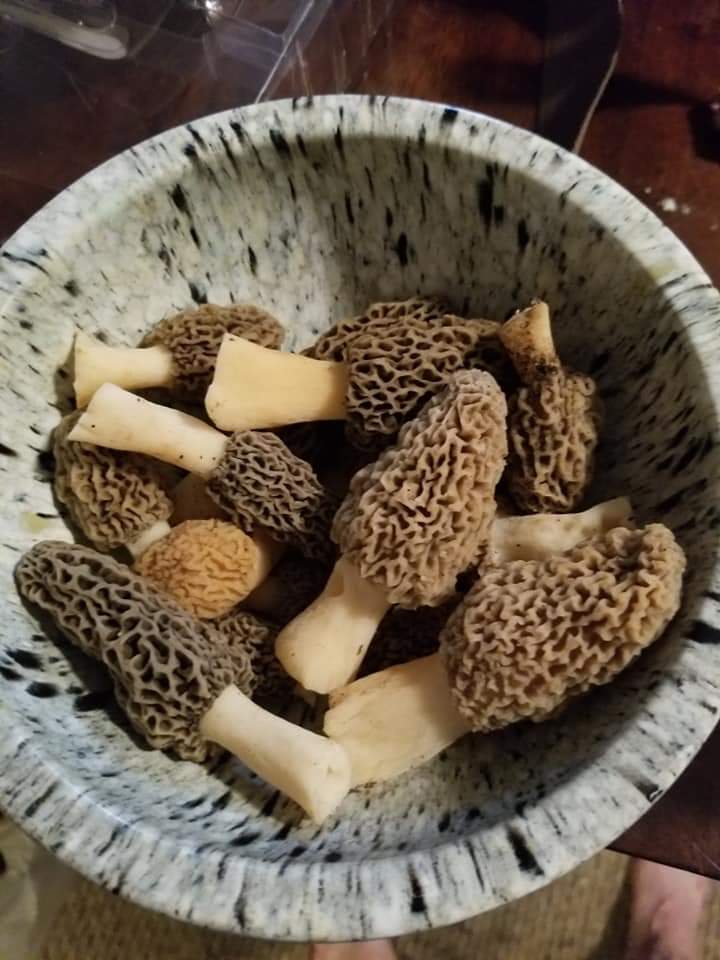 posted on May, 15 2019 @ 07:50 AM
link
Seasons over here, I didn’t go get any. Because I was putting a couple of wild turkeys in the freezer and they are far better than morels.But family did get a bunch of them. I usually hunt them, just didn’t have time to do all the spring time stuff

posted on May, 16 2019 @ 07:40 AM
link
It's been a slow start to the season here in west central Michigan. I went out on a hunt a few days ago with a buddy to one of his spots. It was so dry we found a small but mature black morel on the trail, that was it. It comes down to micro climate conditions, elevation, etc.

On a side note, the trail passes an old dumping ground with hundreds of old bottles. In that area some bottle "diggers" dug up a bunch of bottles and had them laid out. They must have been looking for specific bottles because I took home a half a dozen when we left. They range in age from the 1920s up to about the 1970s. I became a bottle "digger" after a morel hunt where I found a blue medicinal bottle with art deco design from the mid 1930s worth about $50. Even the most common old beer bottles are worth at least a buck.

Unfortunately, unless you can find the right collector, you'll never sell them for their highest valuation. The history of the bottles is what interests me. I found a perfect "tangiest" Brooks catsup bottle (I now have two). These were produced at their factory in Illinois off Route 66 where they have the world's largest catsup bottle (water tower) that the locals want to preserve as a historic site.

ETA: That catsup bottle was produced in the 1940s and is worth around $12.
edit on 16-5-2019 by MichiganSwampBuck because: Added extra comments