page: 1
22
log in
join
share:
ucanthandlethetruth
+1 more
posted on Apr, 19 2019 @ 07:18 PM
link
Does everyone remember the horrific reporting regarding Carter Page being a Russian asset? 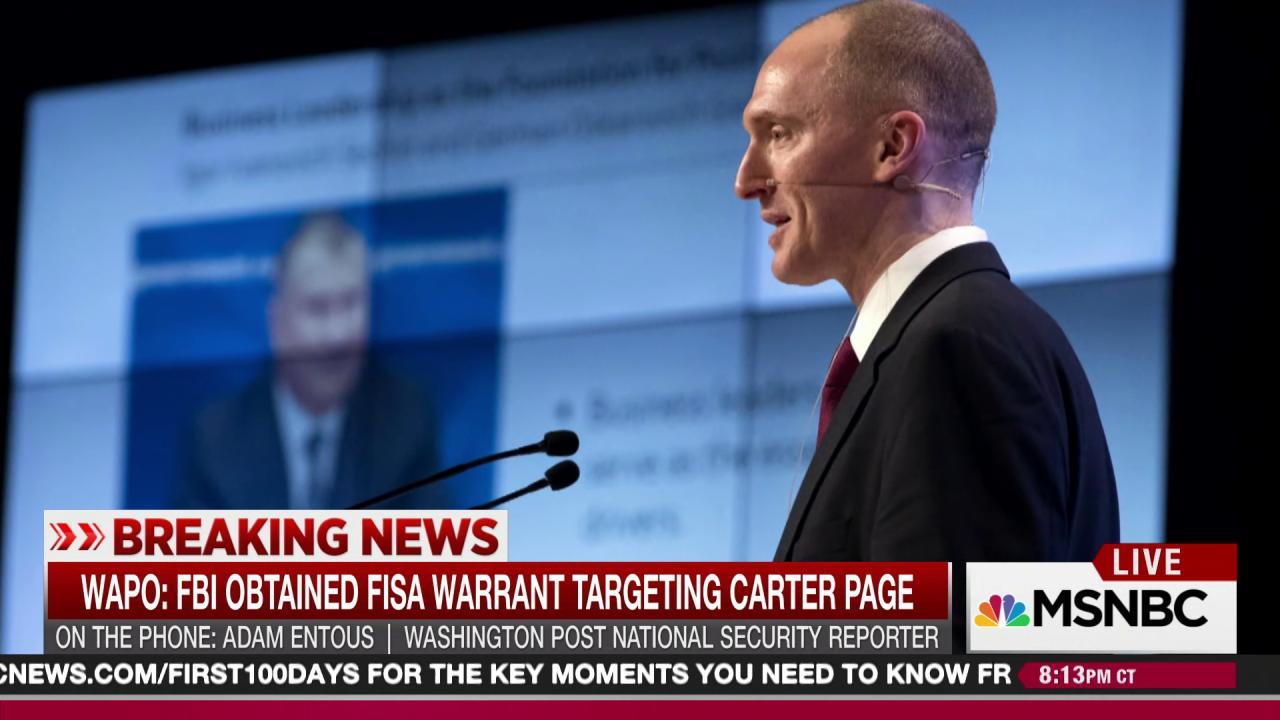 Carter Page was "coordinating with the Russian government" as part of Trump's campaign.

The FISA application (declassified summer 2018) only fueled the flames as far as mainstream media breathless news reports about this Annapolis graduate (top 10% of his class) somehow being a Russian agent.

There are many examples I could provide of news reports regarding Page, but this is the Guardian shortly after the declassified FISA applications:


The documents said “the FBI believes that the Russian government’s efforts are being coordinated with Page and perhaps other individuals associated with” Trump’s campaign.

What the FISA application stated as fact:Source 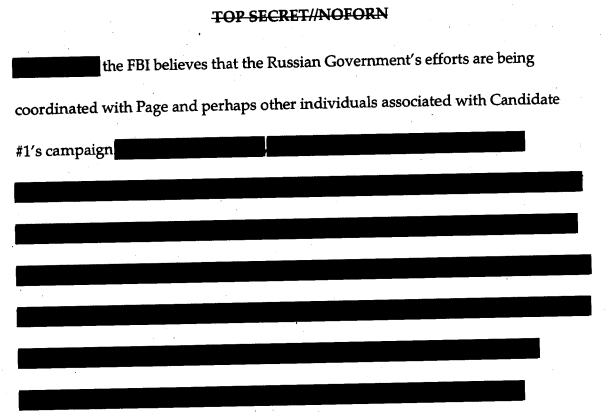 To date, even with the release of the Mueller Report containing no damning conclusions regarding Page, virtually all of the mainstream media is silent regarding these blatant lies and abuse of power in surveilling Americans like Mr. Page. 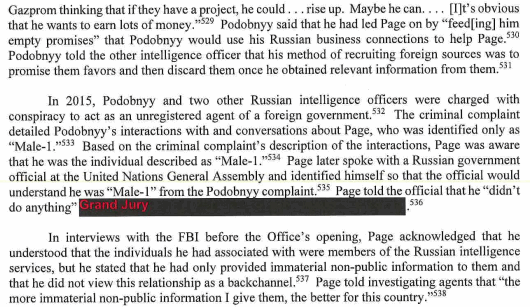 Should there not be questions being raised across the country regarding WHY the FBI was seemingly stating Page was an "agent of foreign power" and coordinating with the Russian government in these FISA applications, when Mueller's investigation found the opposite?

Why isn't this part of the conversation? Was he targeted?

Carter Page's background screams C-eye-A or other agency, especially if you look into the facts of the 2013 Russian Spies case (Buryakov complaint). He has admitted to his role as Male-1, but it was an "energy analyst" who passed on information to the Russians with recording devices, permitting the FBI to record the Russians within their own embassy.

Carter Page is the "founder and managing partner of Global Energy Capital, a one-man investment fund and consulting firm specializing in the Russian and Central Asian oil and gas business," according to his Wikipedia page.

Here is a CNN article about the Russians caught and the recordings used to help bring them down.

...Buryakov unknowingly began meeting with an undercover FBI agent who he believed to be an energy company analyst in 2012...

...The undercover agent started to supply the binders to Buryakov in 2013...


On or about June 13, 2013, Agent-2 and I interviewed Male-1. Male-1 stated that he first met VICTOR PODOBNYY, the defendant, in January 2013 at an energy symposium in New York City. During this initial meeting, PODOBNYY gave Male-1 PODOBNYY's business card and two email addresses. Over the following months, Male-1 and PODOBNYY exchanged emails about the energy business and met in person on occasion, with Male-1 providing PODOBNYY with Male-1's outlook on the current and future of the energy industry. Male-1 also provided documents to PODOBNYY about the energy business.

As BuzzFeed News would report in April 3, 2017, Source


The revelation of Page’s connection to Russian intelligence — which occurred more than three years before his association with Trump — is the most clearly documented contact to date between Russian intelligence and someone in Trump’s orbit. It comes as federal investigators probe whether Trump’s campaign-era associates — including Page — had any inappropriate contact with Russian officials or intelligence operatives during the course of the election. Page has volunteered to help Senate investigators in their inquiry.

It would seem likely Carter Page, given his background at Annapolis, US Naval Academy, top 10% of his class, was an asset "energy analyst" working in Russia and his connection to the country made him an easy mark (or scapegoat) for weaponizing FISA to monitor Trump's campaign.

One of the biggest points lost in the FISA debate is the way "FISA Hops" work and the debate which took place post-Snowden revelations. While Snowden's revelations about the surveillance forced the intelligence community to revise "3 Hops" to "2 Hops", where did Carter Page most often hang out during the campaign? 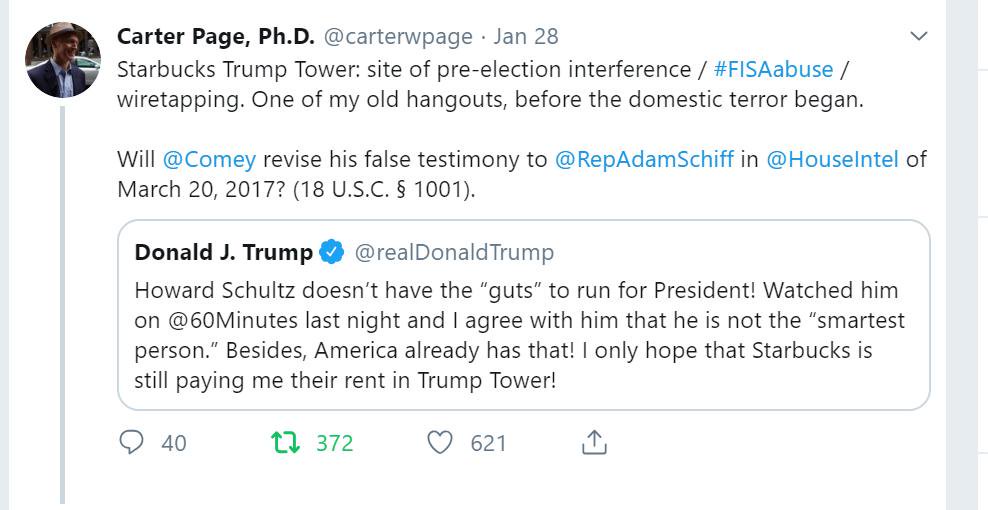 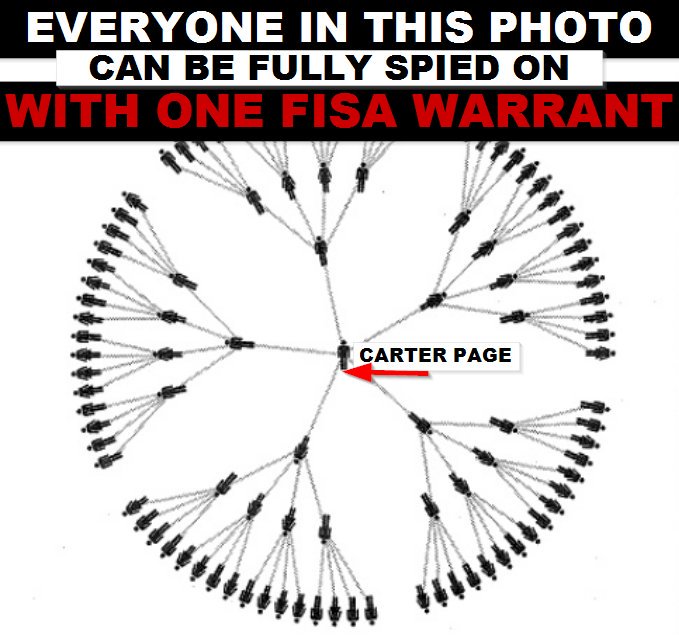 Through the Carter Page FISA, whether Page was complicit or not, they had surveillance of everyone connected to Page/Trump campaign, and then everyone those people were contacted with during this time. Think of it like a branching spiderweb of connections and they could track them all.

There are other Carter Page ATS threads, but most I saw were dead and not new since the Mueller Report's release with damning proof of lies in FISA applications including blatant perjury. Considering Page is considered to be "clean" in all of this mess...

I don't know what to make of this Carter Page FISA mess and who this guy really is, but the media's silence (and the Left's) on this is quite telling.

originally posted by: The GUT
What a shameful smear job they did on naval graduate Carter Page.


The last update on his lawsuit against the DNC for defamation of character was the Judge being forced to dismiss it due to a motion to dismiss from the DNC lawyers.


A defamation lawsuit filed by former Trump aide Carter Page against the Democratic National Committee was thrown out on Thursday by a federal judge in Oklahoma. The suit, which revolved around the infamous dossier compiled by former British intelligence agent Christopher Steele, alleged that the DNC paid for the dossier as part of opposition research that made "extremely malicious and destructive falsehoods" about him. Page, who is representing himself, also made a number of charges in the lawsuit, including that the DNC's actions constituted as "act of terrorism" and racketeering. U.S. District Judge Joe Heaton dismissed the suit, which was filed in Oklahoma, saying in his order that the court lacked jurisdiction over the case because both Page and the DNC do not have strong enough ties to the state as the DNC has only a state affiliate. "This court lacks personal jurisdiction over defendants," Heaton wrote in the order. "Defendants motion to dismiss is therefore granted and this case is dismissed." Page told USA TODAY he intends to appeal the decision in the U.S. Court of Appeals for the 10th Circuit.

Now that Mueller's lightly redacted report has been released, I look forward to seeing a 10th Circuit lawsuit and where it leads from there. However, I cannot figure out if Carter Page was a well-placed plant due to his Russian ties in the 2013 case and assisting in bugging the Russian spies, and weaponized to provide the FISA warrant, and therefore access to everyone in Trump campaign x2 (2 "hops"); OR he was used as a scapegoat for this same reason by the Obama admin?

I can't figure him out and his public speaking is a little terrible. I want to think, is this an act? You definitely aren't a moron. Annapolis grad. I think 2 PhDs. It's like are you just nervous on TV? I would be. But then the Russian spy was described in the court document as being on wiretap saying Page was an "idiot" so maybe he has this act down pat?

Like I said, I can't figure out if I should feel really sorry for him, or wonder why he played such a convenient role in the unprecedented access they had then to a presidential campaign during a highly volatile election year?

It remains somewhat open for me too as to whether Page was a plant or not. If so, I'm leaning towards an unwitting one as far as to what they ultimately used him for---meaning he didn't know they were gonna dirty him up.

That would explain why on one hand his frustration seems legitimate, but on the other why he seems to shy away from certain topics to the point of not seeming exceptionally bright. I do think he's intelligent, however, but between his eccentricity and being some sort of IC asset there's always some holes left unfilled.

I didn't mention it in my last post, but nicely researched and presented thread, U.

I had a thread outlining this problem and how Muellers report finally ends the claim that other evidence was used for the fisa warrant other than the dossier.

The strategy will be to ignore this from democrats.

They know this is damning, and they are still keeping up with the narrative that any investigation into the FBI or Obama admin here is terrible, so they must ignore this evidence