DOJ Has Opened An Inquiry Into The FBI's Russia Probe AKA Crossfire Hurricane!


Attorney General William Barr has assembled a team to review controversial counterintelligence decisions made by Justice Department and FBI officials, including actions taken during the probe of the Trump campaign in the summer of 2016, according to a person familiar with the matter.

This news comes after Barr's testimony in the U.S. Congress,
Tuesday April 09, 2019. Attorney General Barr said he was looking into
the counterintelligence investigation that led to a Special Counsel appointment,
aka The Russia Probe or The Mueller Probe.

“I am reviewing the conduct of the investigation and trying to get my arms around all the aspects of the counterintelligence investigation that was conducted during the summer of 2016,” Barr told a House panel on Tuesday.

According to the person giving the interview (unnamed) this is in addition
to the already existing investigation into the FISA warrant from the
Inspector Generals Office.

Barr’s inquiry is separate from a long-running investigation by the Justice Department’s inspector general, said the person, who asked not to be identified discussing sensitive matters. The FBI declined to comment.

This is as close to a Special Counsel we have come yet, and hopefully the speed
at which this investigation was opened is an indication that the DOJ sees this as
a grave matter.

The FBI and DOJ wrongfully cleared and advanced one presidential candidate
that had actually committed crimes over an innocent candidate. They conspired
against a multitude of innocent people in the process, the crimes are too numerous
to list here, but maybe we can get that in the next few posts.They weaponized the
law enforcement agencies, they interfered in an election and tried to stage a
coup against a duly elected President Trump!

They must be held accountable, and face consequences.
we will see where this goes!

Is this the beginning of the end for all of the bad actors? I can only hope!

More investigating out of the taxpayers pockets, but it's hard to say this isn't deserved. I hope everything is cleared up.

xuenchen
+4 more
posted on Apr, 9 2019 @ 09:30 PM
link
It will eventually be determined that the entire BMueller investigation was based on poison fruit from poisonous trees 😎

but it's hard to say this isn't deserved. I hope everything is cleared up.

This is huge, and the scoundrels have it coming.
Can't think of a better use of my tax dollars as a matter of fact!

I most sincerely wish them all weeks and months of sleepless
nights and huge legal bills, just for starters.

It will be a MUCH quicker investigation, since they have actual evidence that didn't need to be fabricated to start an investigation in the first place and there is no political impetus to attempt to catch everyone in the picture on a perjury trap to justify the investigation gong forward.

The pendulum is starting to swing faster to the right...

I really do agree. Can't wait to see the media reports on this for the next few years. I wonder if Maddow will go full catatonic?

a reply to: Lumenari
I hope so. I just worry about what can be thrown out because of the previous "investigations".
edit on 9-4-2019 by sine.nomine because: (no reason given)

originally posted by: Sabrechucker
a reply to: madmac5150

The petty evil part of me wants them all to bolt down there... the whole rotten mess of them.

Then present it to the world as simple pest conntrol

I like that idea but, waste a nuke on them..I don't know

The Dems want to start investigations into anything Trump. Watch them in turn, get burned.

They would get charged with obstruction.

Funny about the law, it works both ways.

Ohh seems like a nice beginning of April to me.

So, let’s say “Q”, believe it’s an insider or not, is correct about what A.G. Barr discovered in the Mueller investigation. 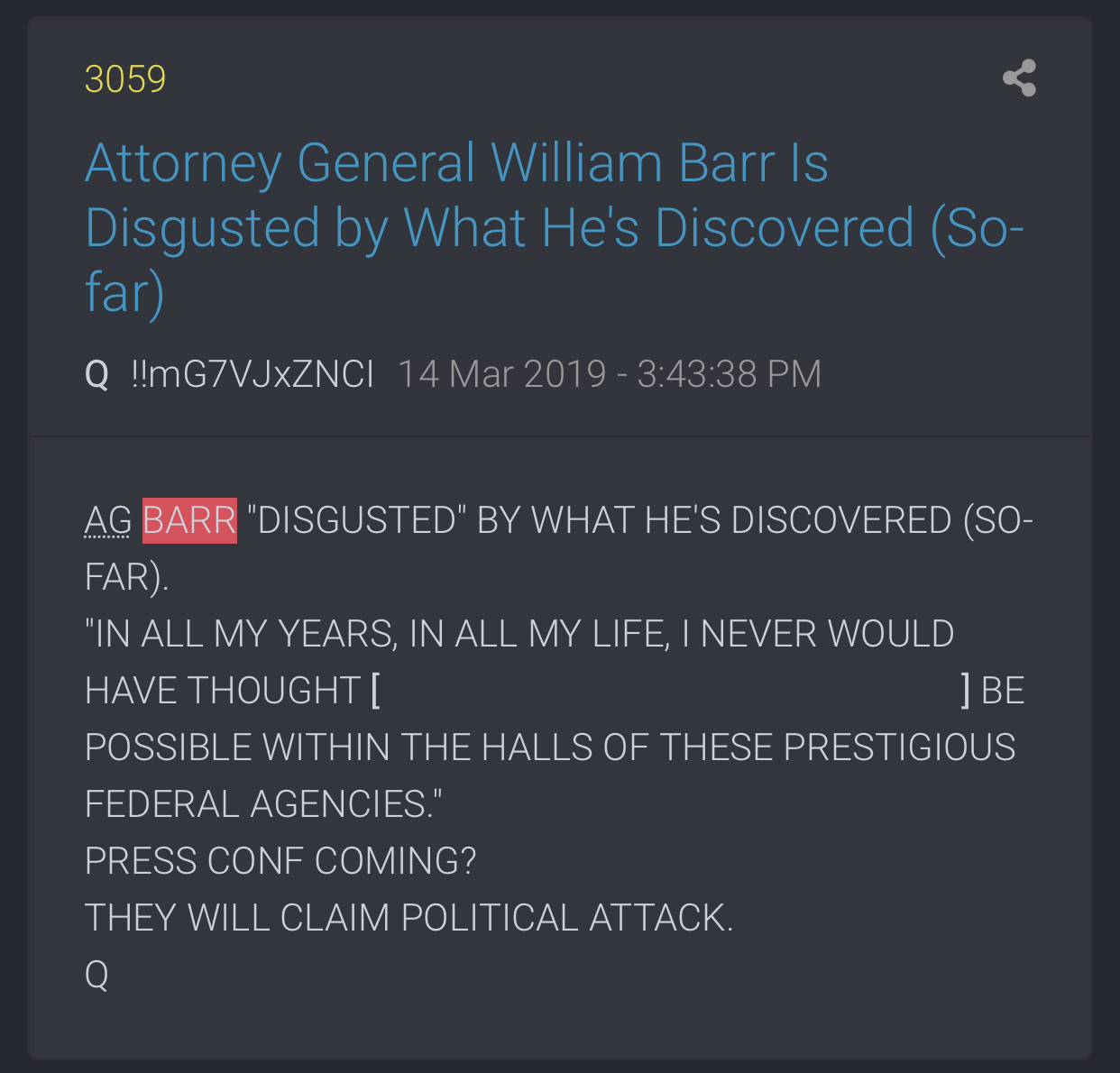 Maybe he’s also sickened to find out that these people used their power to cover their crimes and go unpunished and untouchable until now.

I think it’s about time now to switch papers and see where it goes... Kudos for Barr for having the guts, people who investigate the Clintons don’t usually last long...
edit on 9/4/2019 by vinifalou because: (no reason given)

I think we all new this was coming. I wonder if Obama will be implicated?

Hopefully Lynch doesn't lie during this investigation and get caught up like the FBI claim that Flynn did.

Until these people are prosecuted.

I have no faith in our Justice System.

I don't think she can lie. I believe the tarmac tapes are in play here.

The investigation will find that shady stuff went on. No arrests or formal charges.

I believe you’re in the wrong thread...

This one isn’t about the Mueller investigation.

I’d grab some popcorn now if I were you.

If aunt Becky can go to jail, I would hope these fools can too. Right...

originally posted by: madmac5150
I hope the DOJ is monitoring flights to non-extradition countries.

The beauty of non-extradition treaty countries is you don't have to bring back the body, you must grease the right "wheels," have a good exit plan and of course, bring out the reqursted evidence lol.