"Early Mars was a watery world, but as the planet's climate changed this water retreated below the surface to form pools and 'groundwater'," Salese said in a press release.
"We traced this water in our study, as its scale and role is a matter of debate, and we found the first geological evidence of a planet-wide groundwater system on Mars." 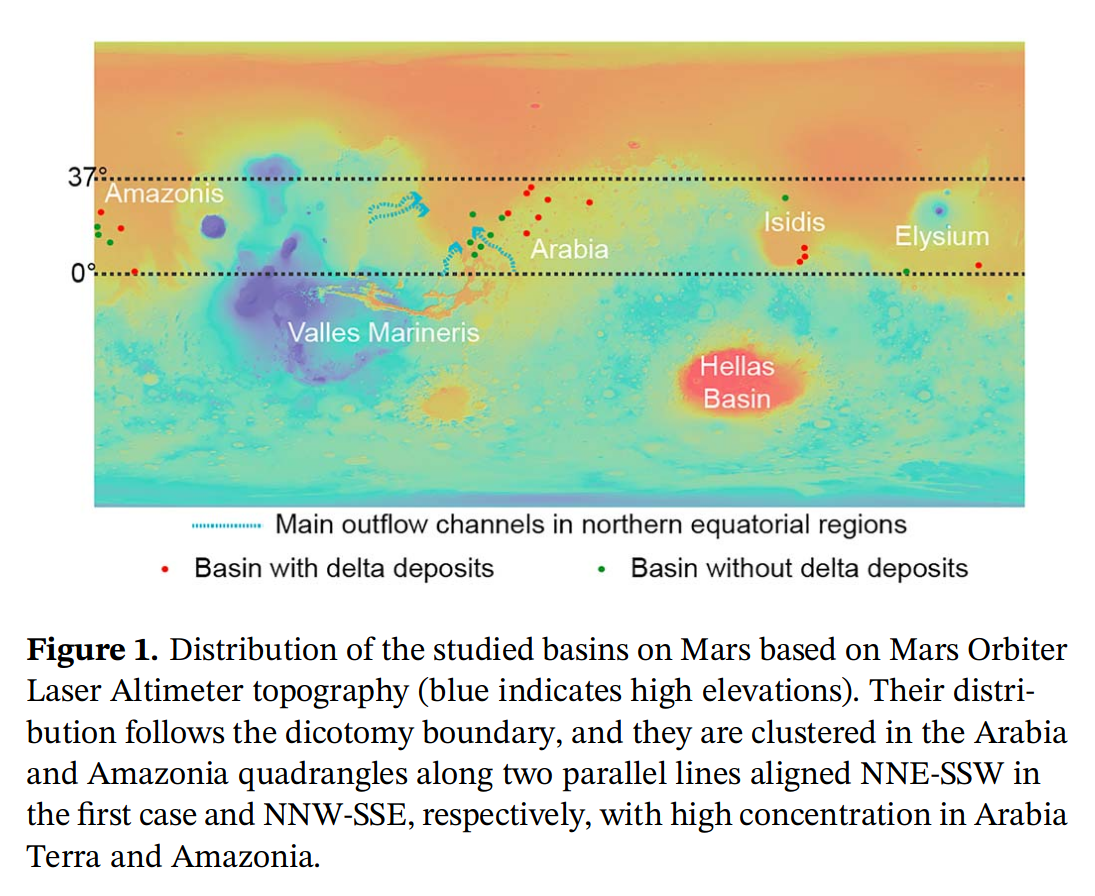 It has been shown that Mars was once had large amounts of surface water. This water went underground when the climate of Mars changed.

There is a good chance that if any life existed on Mars at that time, some of the life also made the transition underground.

Underground the life could of adapted, evolved and flourished. There is no telling what type of life could be thriving under the surface of Mars right now.

Mars geologists at the University of Utrecht studied images from the Mars Express Orbiter. They examined 24 deep craters on Mars. They found indications of groundwater upwelling and that water once flowed on the surface.

The researchers concluded that Mars once had a vast underground water system around 4,000 to 5,000 meters below the sea level of Mars. They published the findings in the Journal of Geophysical Research.

The PDF above has images and information that backs up their research.

Most previous studies on Mars relevant groundwater have proposed models, but few have looked at the geological evidence of groundwater up welling in deep closed basins in the northern hemisphere equatorial region.

Geological evidence of groundwater upwelling in these deep basins is a key point that will help to validate present‐day models and to better constraint them in the future.

Observations in the northern hemisphere show evidence of a planet‐wide groundwater system on Mars. The elevations of these water‐related morphologies in all studied basins lie within the same narrow range of depths below Mars datum and notably coincide with the elevation of some ocean shorelines proposed by previous authors. 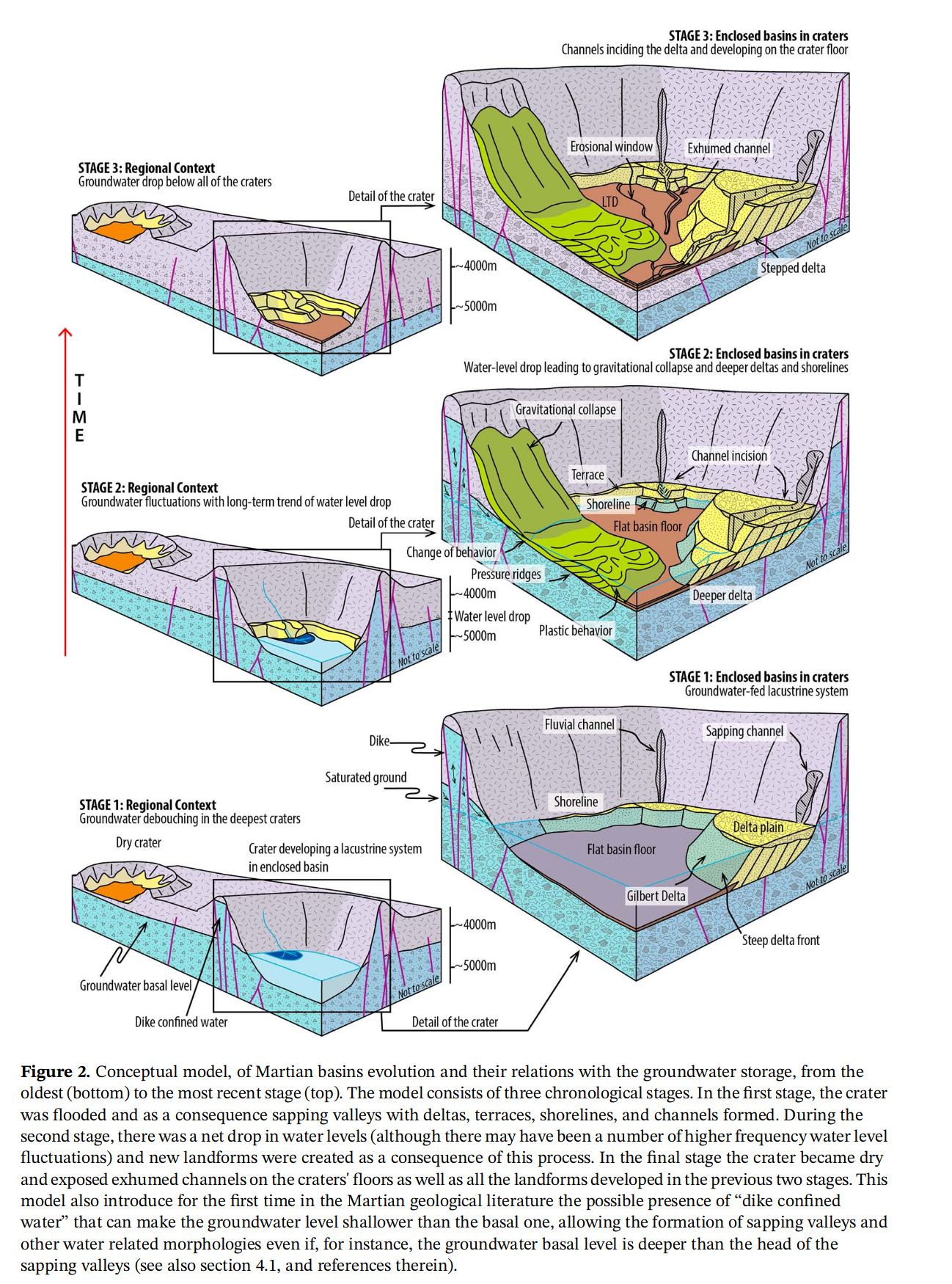 posted on Mar, 2 2019 @ 09:34 AM
link
The fact were only just confirming this now shows how little we really know about Mars.

Im calling it now and taking bets, the next major mission to Mars will find evidence of at least ancient life

Good find, you would have thought this would be all over the news???
S&F

Or how little we are being told about what is known about Mars, hard to tell which it is.

Good point about the MSM ignoring this

posted on Mar, 2 2019 @ 09:42 AM
link
I liken this to the discoveries of life beneath the ice of antartica and the huge lakes such as Vostok that have their own eco system. Anything's possible.
Wonder what caused the weather change?
I'm not au fait with Martian details just what I see on here really

Quite exciting, although to some this won't come as a surprise. But it does increase chances for extant life on Mars, protected from radiation deep underground. What else do we need, let's see: some volcanic activity perhaps?

Thanks. Going to go research a bit more

Is it natural? Or artificial? The words "channel" & "flat basin floor" make me think huh...

Space and airborne mapping technologies provide a probability of whatever is being searched for, it's not 100% evidence. Evidence of groundwater in this case would be sinking a borehole and bringing it to the surface. Don't get me wrong,, I think there is a fairly high probability of liquid groundwater on mars, that hasn't yet boiled off due to vacuum pressure (anyone with a still for alcohol probably knows how to separate ethanol form water using a partial vacuum), but measurements from mapping toys are not evidence, the are guesses.

Imagine little creatures like we have in our deepest oceans under the surface of Mars.

Cartographers, imagery analyst, terrain analyst, and especially hydrologist at the agency I retired from have known that Mars once had flowing water and precipitation since the first Mars orbital images were returned by the Viking -1 in July of 1976. The evidence was the images of dendritic drainage patterns that clearly showed that flowing water once existed on Mars. The dendritic drainage pattern coming off slopes is similar to tree branches. I found it odd that there were still some debates on whether Mars once had an atmosphere and precipitation resulting in flowing water in Mars distant past, after the 1976 Mars orbital images were released showing the dendritic water drainage patterns.

The likelihood of abundant underground water should be found where these dendritic water patterns lead to an area of depression such as a large basin.

Space and airborne mapping technologies provide a probability of whatever is being searched for, it's not 100% evidence. Evidence of groundwater in this case would be sinking a borehole and bringing it to the surface. Don't get me wrong,, I think there is a fairly high probability of liquid groundwater on mars, that hasn't yet boiled off due to vacuum pressure (anyone with a still for alcohol probably knows how to separate ethanol form water using a partial vacuum), but measurements from mapping toys are not evidence, the are guesses.

Mars: That planet is all hype. You can only rediscover water on the same planet so many times. It’s just a playground for NASA engineers to drive their rovers.

posted on Mar, 2 2019 @ 11:12 AM
link
I wonder how much per bottle they will be charging for the refreshing water from mars in the future?

I bet someone will try to sell it based on healing properties claiming this stuff was hidden cause it really cures you.


Is that Martian-man made magnetic field stripping?


Or perhaps it was a failed Terraforming by Galactic neighbors that ran it's course and finally became surface and atmosphere barren.

Could there be a possibility those channels are from electrical scaring? Does anyone even consider that possibility yet?

Scars very similar to those pictured in the right hand column of this page appear on a number of different planets. Such scars tend to defy traditional explanations. For example.

Many craters tend to be almost perfectly spherical. Impact craters very rarely achieve this.
Some of the craters exhibit internal spiral patterns. Impact craters don't do this.
Crater chains often appear in straight lines. The chances of this happening are close to zero.
Channels begin and end out of nowhere.
Channels tend to be predominantly flat floored, ending with steep walls.
Channels often criss-cross, ignoring pre-existing channels. Liquids don't do this.
Channels often run up hill. Again, liquids do not tend to do this.
Many planetary rilles run for thousands of miles in almost straight lines or wave like patterns.
Missing debris. Assuming some of the features are produced by traditional methods, where did the material that has been removed go to?

Most of these electrical features are reproducible in the lab.

Sometimes these features are explained away as lava flows, or collapsed lave tubes, even where there is little evidence for any other volcanic activity. Wind and water may also be cited, but typically the planets concerned are supposed to be dry, or at least have been for many millions of years.

It is also interesting to note that many meteorites hit the earth without producing craters, and that we find many craters with no evidence of any impact! 'Weld like' scars Planetary scars

True. I've never seen a spherical crater. Lots of circular ones though. Lots.

Sorry, I couldn't keep reading after that.

I guess if I shine a light on the outside of an ass, I can tell if there's cancer buried 5-7" inside, because *evidence* lol. It must be a liberal consensus type ideological process. Evidence means proof.go to any, ANY, geological search company and ask for a guaranteed find for underground gold, silver, lithium, etc., you won't get it because it is probabilities, not PROOF.

Silly wabbit, Trix are for kids!

Good for you phage. To encounter a slight error on terminology and just write off the rest as rubbish must be an easy world to live in. Instead of attempting to read into what the author actually intended, to question why all of these so call impact craters are circular instead of being elongated or elliptical in appearance.

I guess you would then fully buy into the idea that when an incoming object impacts a serface, it blows up thus creating an almost perfect circle. Perfect depth with hardly any debris surrounding it. Sure, thats the ticket.

love ya man, truly love ya as your discernment is an equal opportunity employer.