Princess Ardala was my favorite Draconian.


Doing it just before he gets on a plane in LA says a lot, they don't want him upsetting the sheeple. The only problem with a banned book it outsells the ones that are not. I'm guessing the Israelis don't want him spouting on about dead kids in Palestine, it doesn't look good.


I'm pretty sure David Icke may have an issue with the Israelis.

Wrong. He has a problem with the bloodline families who have subjugated humanity to a perpetual debt slavery monetary system for millennia. Many who happen to be Zionists. But I wouldn't expect you to understand that.

Lilith is a fav of mine 😉


I agree. When I scan for some of them during Astral travels and or Remote viewing it feels like they are more part of the Metaphysical or Spiritual realms but can manifest here somehow...
I don't get vibrations that they are all malevolent. Some may be just as some humans are.
Others seem more benevolent driven. I am not sure if some grey aliens types are reptilian.


Some say that.
I attribute some of her offsprings activities to be somewhat vampuric. That may be where the tales arise.

Considering she was supposed to be ADAMU first wife 1 can imagine what the Creators of mankind originally had in mind for what is known as sapiens sapiens today.
Imagine if her and ADAMU reproduced? 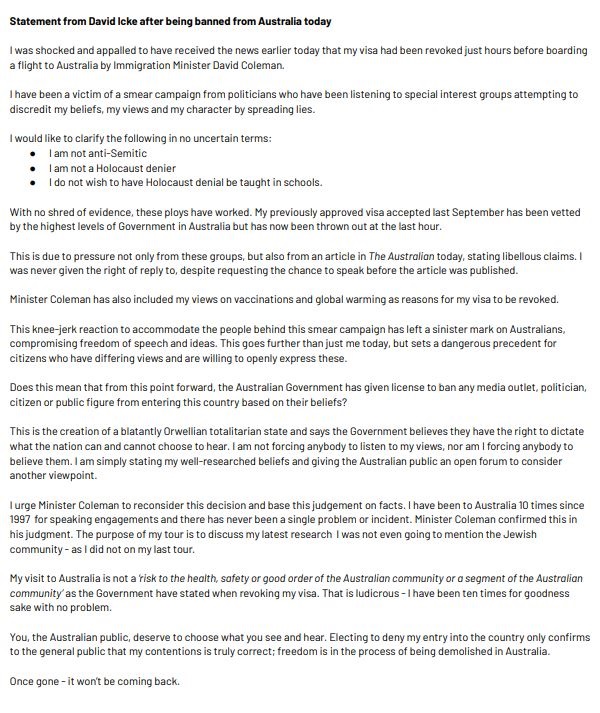 posted on Feb, 20 2019 @ 09:32 PM
link
its all orchestrated. David is SOL. These groups dont have mass support they just give cover to politicians to act out 1984 style tactics.

Oh to be a gutless leftist. “Everything offends me”


The ANZACS died for the protection of free speech, democratic freedoms, and to end the Holocaust, They must be turning in their graves.

"We would have been concerned if Immigration Minister David Coleman granted a visa to anyone who intends to vilify a segment of the Australian community or sow dangerous seeds of disunity."

Dvir Abramovich, the chairman of the Anti-Defamation Commission who launched the campaign to revoke Mr Icke's visa, praised the Government for "declaring in a loud voice that anti-semites and Holocaust deniers will never find a home in Australia."
"Allowing Icke into our country would have crossed red lines and would have sent the message that it is open season on the Jewish community and that vilifying and maligning Australian Jews is ok and normal," Dr Abramovich said."


There you go. ADC gets veto over Immigration Minister.
edit on 21-2-2019 by pthena because: (no reason given)

maybe its just getting started, this is the first step maybe?

That would be the work of Dutton no doubt.

This is another case of the govt banning the right to free speech. It proves we have lost a certain amount of our democracy.

This can only be the beginning.

All governments hunger for power, this lot will not be able to resist the hunger to ban more international speakers.

What you think of David Ike is totally irrelevant.

If you agree with banning Ike then you are siding with those that will take your right to free speech away from you when they are ready. What makes you think that your so special to them that they wont?

I am one of his assassins. The guy has been spreading hate big time in a very real way.

He has spread hate about Christians, about Jews about many families. They are outright LIES and he has been trying to character assassinate these groups and people. I have caught him first hand doing all this and have read some of the hateful commentary he promoted.

He has misled many people, particularly the young and vulnerable who do not know any better. I think this is getting off lightly. I think he is likely to spend the rest of his life in law suits against him if he carries on like he has done.

I personally informed him of my annoyance about the anti Semitism he has been spreading for many years. He has even got some writers who had good careers thinking there is something in what he is saying. He has showman charisma, but so did Jim Jones and every other successful snake oil salesperson.

Remember this is just some C list presenter from yester-year who though he was the son of G-D, lol. Truly, that is why they sacked him from media. He got delusions. He has spread his delusions like a plague.

That's what you get for muck spreading. If I was him right about now I would be thinking "Oops, I am gonna be seeing lots of judges soon."

Do you not see how unfair it is to lie about a man and try to destroy his reputation with outright lies and slander as a broadcaster? David has made a career out of this. He is a vile little man. We come from the same city. He is just another market man with a gob too big for his intellect. The muck he has spread may have incited people to do some atrocious vandalizing. He better watch out the two are not put together some day.

ATS, I have time for. The mods here don't let it get too crazy. I commend them. I have time for the conspiracy angle and believe it to actually be a healthy thing in democracy to question ourselves, even in lateral ways like this. Lies are loathsome. ATS knows that. They have a "Hoax Bin" and that is where David's silliness belongs.

I think this little Monty Python clip suits him best:

He's a naughty lier and muckspreader living his own fantasy and taking as many people as he can down "Delusion Avenue" while making quite a tidy sum of cash out of it. That is what Jim Jones did too. David may have incited people to do some serious nasty stuff to the objects of his personal hatred. He made his money and success from the misery of others by telling lies in just about every sentence he speaks. I think he is doing it for money and to satisfy his grudge at the establishment for losing his "C" list, minor celebrity status.

Most of all he has duped you guys. He has exploited you for financial and celebrity status gain. He has taken you for a ride. He is your deceiver. It upsets me to see you defend the very man who has been filling you up with all this crap. It is "Cult of Icke" and you have been duped. Think, think, think! This guys has got you believing all manner of crazy delusion and fantasy and took your money at the same time.

He is nobody's friend but his own and he is even his own worst enemy for the trouble that will now be evidencing in his life for past crimes. I have this advice for all who think they can get away with anything that raises them to the detriment of others - BE SURE TO PUT A LITTLE ASIDE FOR YOUR LATER TORMENT!

He has given us all who are interested in the conspiracy genre a bad name, made us all out to be the fool he is. We are not. We need to show that we don't just jump on the nearest band-wagon as a recruit if it matches with our personal grudge. "Out of the box" thinkers are really needed in the free world, the more the merrier. We must remember though "out here on the perimeter there are no stars" and many deceiving spirits. It helps to be armed in the armour of truth and integrity. Let's really get down to where we are at. People are noticing stuff here that is not even a conspiracy of humans, but beyond that. There is big hope for us together if we can keep pushing at the walls of our perception like this.

It is a worthy pursuit and David has shamed us like a Judas. So has Alex. We don't need stars here. We are all the stars. It is one place that we all get placed in where our words have to speak for us, where all the celebrity stuff makes no difference. It is the power of thought, the power of curiosity and all the fine human qualities.

We have a grave responsibility to get it as right as we can! With these jokers out the way we may actually establish ourselves as useful to the world instead of being tarnished with the image of anti Semites and muck spreaders. I would have hated to see ATS be sabotaged by all that. That is one reason why I have been very positive about Jewish people here. I am letting them know that we are not like that. We are just curious souls who want to make sure our free world stays free.

This is who I think we are, so be proud of that!

Just watch out for the "killer(s) on the road" who'll turn ya into Jim Jones if you are not careful!


Yes you are entitled to your opinion, I disagree with it , but commend you for taking the time to write it.Thats what free speech is all about.Not gagging a sincere man mid flight, and removing his right.


Do you not see how unfair it is to lie about a man and try to destroy his reputation with outright lies and slander as a broadcaster? David has made a career out of this. He is a vile little man.

So what would you call what youre doing to David right now? Are you not trying to destroy his reputation with outright lies and slander? or can you prove anything?