posted on Feb, 13 2019 @ 04:18 PM
link
I've posted about this before, but the draft has now been finalized. This is bad news for pretty much any website that allows user generated content(such as ATS) and any European members here should really get behind stopping this.

Moments ago, negotiators from the European Parliament and the Council concluded the trilogue negotiations with a final text for the new EU Copyright Directive....This law will fundamentally change the internet as we know it – if it is adopted in the upcoming final vote.


Commercial sites and apps where users can post material must make “best efforts” to preemptively buy licences for anything that users may possibly upload – that is: all copyrighted content in the world. An impossible feat.

In addition, all but very few sites (those both tiny and very new) will need to do everything in their power to prevent anything from ever going online that may be an unauthorised copy of a work that a rightsholder has registered with the platform. They will have no choice but to deploy upload filters, which are by their nature both expensive and error-prone.

Should a court ever find their licensing or filtering efforts not fierce enough, sites are directly liable for infringements as if they had committed them themselves. This massive threat will lead platforms to over-comply with these rules to stay on the safe side, further worsening the impact on our freedom of speech.

Reproducing more than “single words or very short extracts” of news stories will require a licence. That will likely cover many of the snippets commonly shown alongside links today in order to give you an idea of what they lead to. We will have to wait and see how courts interpret what “very short” means in practice – until then, hyperlinking (with snippets) will be mired in legal uncertainty.

No exceptions are made even for services run by individuals, small companies or non-profits, which probably includes any monetised blogs or websites.


Good luck with that .....they cant police the internet now!!

Too busy trying to trace hate crimes on social media.

Pour some memes out for our European homies.✌️
edit on 13-2-2019 by CriticalStinker because: (no reason given)

Its totally unworkable and probably unenforceable.

This unelected quango in Brussels have way too much time on their hands.

I just want to take a moment, as an American, to flex on the EU. 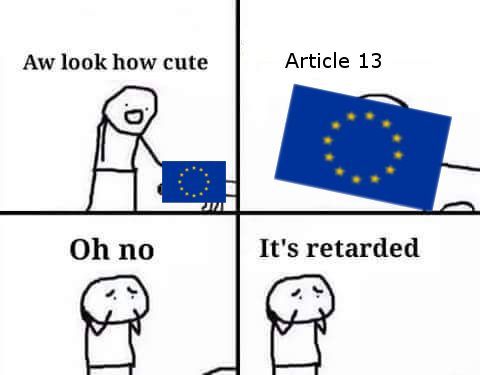 Of course, that meme would work with replacing the EU for Axel Voss as well...
edit on 13-2-2019 by burdman30ott6 because: (no reason given)

Thanks for this update.

The EU has shot itself in the foot here digitally. The laws that the EU is adopting relating to the internet and digital technology/emerging artificial intelligence is its own coffin commercially.

I am always haunted by what Mr Putin said about they who lead in Artificial Intelligence ruling the world. I know he is correct.

The EU has already shut itself down relating to the data industry. The data industry is one of the biggest industries and commercial interests of the future. This new draconiam legislation is getting China like. I am sure Google will build algorithms for internet control for the EU authorities like they have for the Chinese. Google don't mind a bit of state censoring as long as the money is good.

I think that the authorities are a bit scared of the internet. They are right to be. I am scared about some extreme elements of it too. In a sense I understand why the EU is trying to control the beast, but at the same time China, Russia and the U.S are going full steam ahead witht the data industry. Soon they will make the EU look like something out of the stone age digitally. Already the signs are there. The only bits Russia and China are wanting to censor are the bits that challenge their dictatorial political grip. They would not want their citizens reading what I am writing right now even. All that I am writing is subversive to them and their style of governments by force.

The UK could go the way of the U.S. It would be better if we want to advance and evolve digitally. It matters because the strength in economy for states will be linked to digital industry and commerce ever increasingly.

Most of my expendable income is going on digital goods now. I buy lots of software and it is all state of the art. So much of my life is expressed online too, not in social networking, but in other ways.

I think they don't like it because the usual businesses can't keep up and are turning fast into dinosaurs, the internet empowers the masses and enables them to communicate. I say this to the EU that you will become a dinosaur carrying on like this. Don't follow suit, Britain or U.S. Push it and evolve fast. Britain, particularly, now is your chance as a free state to do your own thing. You could easily recreate yourself as a digital big fish in the world pond if you choose to. At least do something useful with this dodgy Brexit opportunism. Israel are going full steam ahead and so are the U.S. I think they have the healthy plan, not the EU. China only censors its people. They still harvest all the data with no morality what-so-ever. I bet Russia do too. There is still no privacy in either state despite the iron grip of control those states have upon their citizens digitally.

I worry about extremism. I worry about children being exposed to too much adult stuff before they are ready emotionally. Monitoring and precise policing would work best.

You know, at best they will send the internet underground and will lose even more control of people. People always find a way and there is always a sly $ to be made "enabling" folk where the state interferes with freedom too much.


“Everything echoed throughout this article leads us into a much larger dilemma; the influence of big tech firms is so widespread, that Chinese censorship may only contrast slightly with the modus operandi of these companies otherwise. Western media is centrally controlled by very few overarching firms. Let’s say Google made the decisions noted below in this section independently, and it was not an infiltration of Chinese-oriented censorship to break into their market. The fact that the outcome of censorship points to the exact same ideological traits is horrifying either way.
* On one hand essentially, tech firms are bending over to please the ideals of the Xi Jinping Doctrine, in hopes of courting favor with the party — leading to their eventual approval to begin operations within China.
* On the other hand, tech firms are pleasing the ideals of the Xi Jinping Doctrine — without being told to, simply because they already ideologically align”

Was just reading this article about China’s influence on tech companies (it’s so long; but has so much information) and then this thread and your comment specifically, and thought some may like to scan this info as well.

Not sure where we’re headed with the internet agenda, but it’s quite obvious that the ruling classes in most countries are trying desperately to reel it back into their control- seemingly through the tech giants.

I’m new to posting and so if I inserted this link and quote from article wrong, I apologize. Also on mobile.

You can click on quote to see how this is formatted. Hope that helps. Also see the Freshmans Forum for helpful info.