originally posted by: JinMI
a reply to: theantediluvian


I think everyone knew it was coming eventually, including Roger Stone. It took a little longer than I'd expected.

I caught part of an in studio panel with Carter Page, Michael Caputo, Jerome Corsi and Sam Nunberg (I think it was last night?) on Ari Melber's show (MSNBC). The impression I got that Roger Stone had been running around telling basically everyone who would listen that he was in contact with Assange/WikiLeaks.

The indictment is out, I'll see if I can snag a copy.

Count 1: Obstruction of Proceeding (for obstructing the HPSCI investigation) 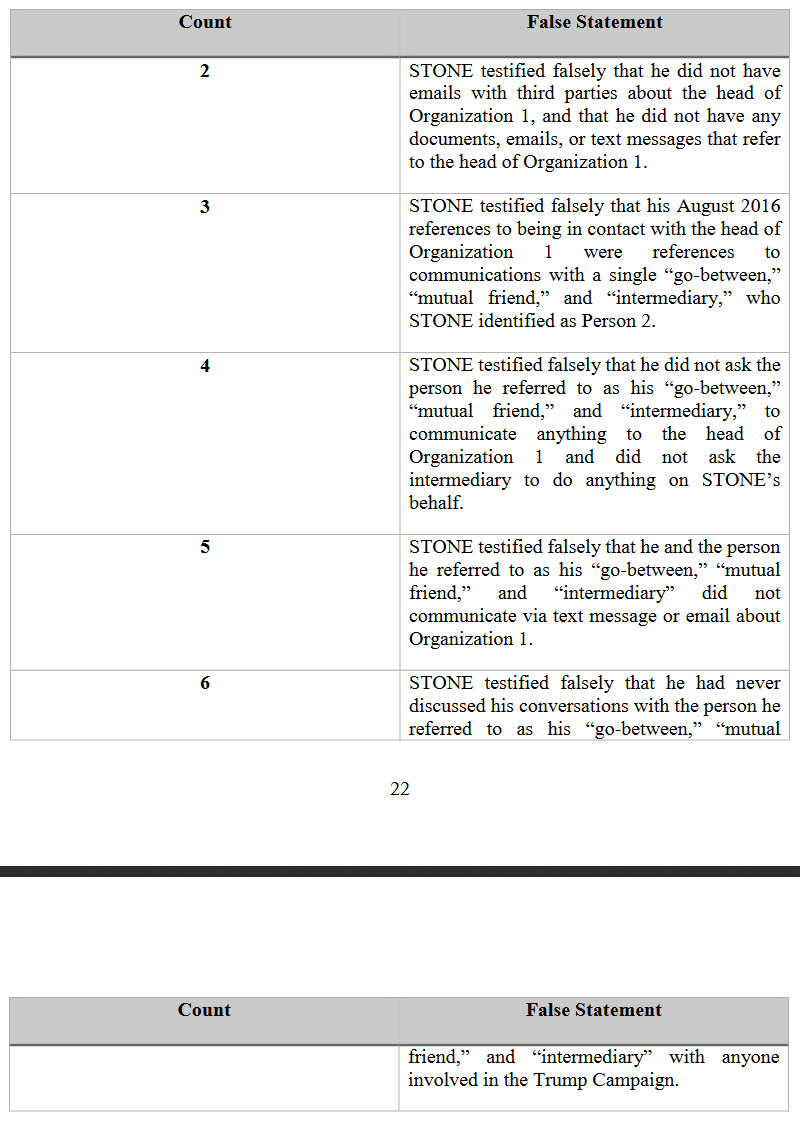 posted on Jan, 25 2019 @ 06:23 AM
link
I have read the indictment in full.
Stone is getting what he deserves - he is an idiot. The indictment note, prior to getting to the obstructiona and witness tampering charges, shows that he did absolutely nothing wrong. In fact, it's no more than any investigative journailst would do in trying to dig up information via sources.
However, the idiot then proceeded to lie about those contacts and also tried to force "person 2" (who I believe is Jerome Corsi??? Maybe not based on above) into lying or withholding information.
Stone fell into the process crime trap and he's going down for it. All he had to do was tell the truth.
Good, he is a slimy POS.


Given Stones past I can see his point.


Stone's political career began in earnest on the 1972 Nixon campaign, with activities such as contributing money to a possible rival of Nixon in the name of the Young Socialist Alliance – then slipping the receipt to the Manchester Union-Leader.

He also hired a spy in the Hubert Humphrey campaign who became Humphrey's driver. According to Stone, during the day he was officially a scheduler in the Nixon campaign, but "By night, I'm trafficking in the black arts. Nixon's people were obsessed with intelligence
en.wikipedia.org...

Oh 24hr media circus, what will you bring next. Ugh.

Uh, because he (stone) worked for the Trump campaign, of course.

Was the information true or bs?

posted on Jan, 25 2019 @ 06:32 AM
link
Funny, his wikipedia entry has already been changed to reflect this in the first paragraph. You lefty's are pathetic. Staying up all night salivating and waiting for what everyone - including Stone himself - knew was going to happen.

I would imagine just like every other thing to do with this it is all process crimes. Sure he will do some sort of time. Not sure if it will amount to much and I do not believe that if he lied to the investigation it will have any effect on Trump himself. So sorry salivators, no impeachment for you.

originally posted by: gortex
a reply to: theantediluvian


Mueller’s indictment states that during the summer of 2016 Stone spoke to senior Trump campaign officials about Wikileaks “and information it might have had that would be damaging to the Clinton campaign. Stone was contacted by senior Trump campaign officials to inquire about future releases by” Wikileaks, which the document calls “Organization 1”.
www.theguardian.com...


You're not really thinking this through.
This indictment makes the idea that the Trump campaign was colluding with Russia even less of a possibility.
Why would they be reaching out to Roger Stone to see if Wikileaks had something?
If they were colluding with Russia - or even Wikileaks - they would have the information they needed without Stone.

This has nothing to do with Trump or collusion - it's Mueller going after another person in Trump's orbit, putting the squeeze on, and waiting for the mistake to nail him on a process crime.

The next person on the chopping block in Alex Jones. By the end of this the talk radio crowd that had such a big influence in combating the MSM are going to be too scared to speak up and challenge the narrative. That is the intent - to shut them all down. Despite Stone being a shady character, to say the least, the actions of the SC are way way beyond the pale.
edit on 25/1/2019 by UKTruth because: (no reason given)

I wonder how many bullets trump is sweating right now.

originally posted by: gortex
a reply to: Trueman


That's not a question anymore.
The info came from Wikileaks and Stone's connection was through a mutual contact that knew both Stone and Julian Assange.

The information leaked was of course true.

Mueller is very good at putting people in a legal vice and tuning the screw until they pop and tell him anything he and his team want to hear.

Stone will be a Trump hating registered democrat with Clinton attorneys before this is all over probably.

Mueller is very good at putting people in a legal vice and tuning the screw until they pop and tell him anything he and his team want to hear.

Stone will be a Trump hating registered democrat with Clinton attorneys before this is all over probably.


Indeed - which will actually be quite funny to watch given how much bravado Stone has shown. His talk about 'never turning on Trump'. We'll see Roger, we'll see.

Uh, because he (stone) worked for the Trump campaign, of course.


In 2015 and before any of things they are talking about in the indictment took place.
Again - the actions they spell out in the indictment leading up Stone being questioned are not crimes. They got him because he lied under oath about specifics and also tried to cover his lies. He got caught in a classic process crime and that makes him an idiot. But there is nothing here that relates to any conspiracy with Russia. Given the absence of that, we can conclude that he was NOT in fact colluding with Russia.

posted on Jan, 25 2019 @ 06:53 AM
link
The arrest of Stone shows you the absolute third World $#ithole Banana republic America has become.
Anybody still living in the fantasy realm of “the land of the free” needs to get their collective heads out of the sand.
America has been its death throes for a good few years now and the last vestige of hope for those still believing in what the country was founded on was the election of Trump and the draining of the swamp.
2 years later and we still have this BS S#itshow with Mueller and his cringe Russian Collusion which should have been shut down in the first month and the whole bunch of corrupt deep state Machiavellian traitors tried and hung for treason but no the circus goes on.

Was the information true or bs?

That's not really what Mueller is looking at.

The problem is that he lied to investigators, which is a crime.