This was published on the off Guardian website yesterday.

A US contractor accidentally revealed a US military specialist deployment in the combat zones in Ukraine via a Job Advertisement on LinkedIn.

Similarly to the Atlantic Council’s report on independence of Eastern European countries, as well as the meeting between US Secretary of State Mike Pompeo and Ukrainian Foreign Minister Pavlo Klimkin, the posting comes days before the escalation in the Sea of Azov.

Mission Essential is a government contractor, which primarily serves intelligence and military clients. It began as the US government’s leading provider of translation and interpretation services. 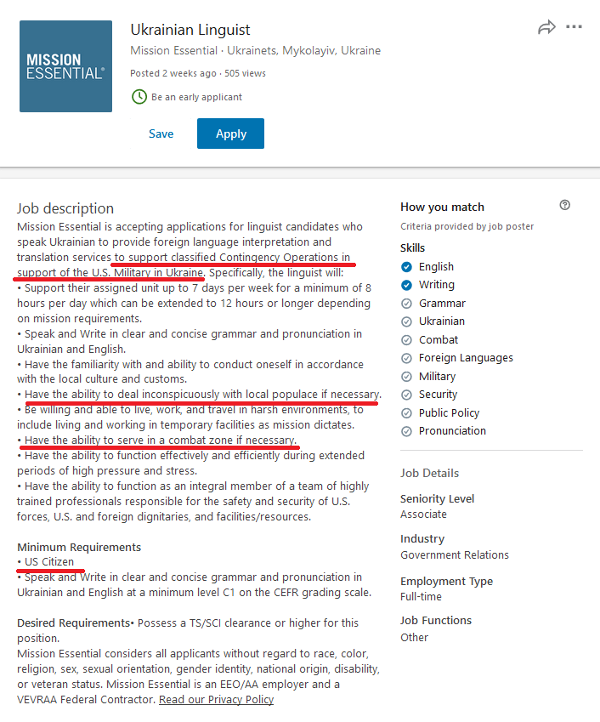 Considering repeated claims by the US leadership that the US is not involved in the Ukraine conflict, the vacancy posting is an operational security failure by Mission Essential. Most other vacancies posted by the company are for analysts and various linguistic and project management positions, almost predominantly in different military facilities in the US.

I am not an expert on these matters. This could be nothing unusual. I post this in good faith believing some members will find it interesting.

Isn't this how Nam started with "advisers"? How'd that work out? Slippery slope....

maybe to do the job these guys were doing.

the only optimistic angle i can get out of this is that its not us army (always will be a few in the mix)
perhaps indicating the m.i.c.is not backed by potus.
the attempt to forment major war in syria has failed.
cleverly stymied by russia bringing in turkey to counter and hold idlib.
nato cannot roughhouse with turkey,
the optics and euro energy supply routes cant allow that.
so the power struggle has been relocated to the european theatre, ukraine.
so the i.m.f has promised porky sacks of money despite the fact hes just put ukraine under martial law for his failed false flag.
that will be going towards the next offensive.
interesting articles
themillenniumreport.com...[ /url]
[url=http://]http://themillenniumreport.com/2018/11/kerch-bridge-provocation-a-psyop-needed-by-the-ukraines-president-british-intel-community-and-u-s- military-industrial-complex/
themillenniumreport.com...

and to illustrate the ongoing formation of the european soviet
www.ukcolumn.org...

originally posted by: Morrad
a reply to: olaru12

Started with the Gulf of Tonken incident.

Thanks for the links. I will look at them tomorrow.


originally posted by: Morrad
a reply to: olaru12

Started with the Gulf of Tonken incident.


Not exactly you’re both correct, us advisors were in south Vietnam from the late 50s with the first death of a US servicemember in Vietnam, the first direct combat was in ‘61 when 400 green berets were sent, the formal declaration of war was in ‘64 following the gulf of Tonkin incident with the first marines landing in early ‘65.