California Forest Fires, are They Caused by Climate Change or is Something Else Occurring.

posted on Nov, 12 2018 @ 03:34 PM
link
We are constantly being bombarded with claims that the California forest fires are getting worse "because of Anthropogenic Climate Change." But is it true or is there something else occurring?

In 2016 I posted another thread showing how cosmic rays hitting Earth have been increasing.
Cosmic Rays, especially X-Rays, The Solar System is Receiving Have been Increasing

Apart from that Earth's magnetic field has also been weakening, and in 2014 the weakening became 10 times faster.
Earth's Magnetic Field Is Weakening 10 Times Faster Now

But anyways, instead of taking the word of climate change activists in news media and elsewhere, i decided to look and see how the situation is evolving concerning the increase in Cosmic Rays we are receiving.

I found this article from March 2018.

That’s the conclusion of a new paper just published in the research journal Space Weather. The authors, led by Prof. Nathan Schwadron of the University of New Hampshire, show that radiation from deep space is dangerous and intensifying faster than previously expected.

The story begins four years ago when Schwadron and colleagues first sounded the alarm about cosmic rays. Analyzing data from the Cosmic Ray Telescope for the Effects of Radiation (CRaTER) instrument onboard NASA’s Lunar Reconnaissance Orbiter (LRO), they found that cosmic rays in the Earth-Moon system were peaking at levels never before seen in the Space Age. The worsening radiation environment, they pointed out, was a potential peril to astronauts, curtailing how long they could safely travel through space.
...

Even thou in that article they are concentrating on how this increase in Cosmic Rays will affect space weather and our astronauts, the fact is that the amount of Cosmic Rays we are receiving keeps increasing. And as the article above mentions, it is 10% worse than what they thought it would be.

But I know some of you are already asking yourselves "but what does this have to do with the California fires?"

Well, i decided to look at where the worse events of Cosmic Rays are hitting us now. There are three large events occurring in three specific areas. Everywhere else on the plant the events are much much smaller. The three areas being hit then worst the events are magnitudes of 800+ higher than anywhere else.

Two of those events are overlapping each other, and incredible enough those two areas are covering a large portion of California, alongside some other states. 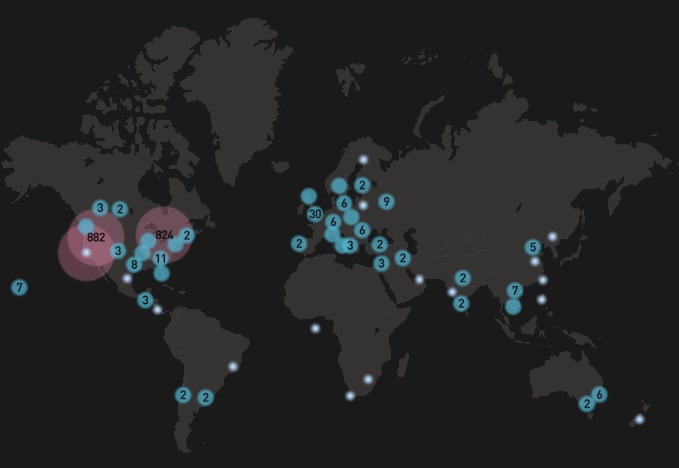 Here is a link to where I got the above picture.

Now, for the past 45 minutes or so i have seen at least one of the two overlapping events increase from 809 to over 890. But it keeps going up and down. That number we are seeing is from just one of the two events.

What a coincidence that this increase in Cosmic Rays is occurring worse than what we have seen since we started observing the space weather, and we are seeing the worse forest fires in California not seen in 80 years.

Yes, once again this article concentrates on space weather, and how the increase in cosmic rays will affect our astronauts. But what about Earth? More so since our own magnetic field has been weakening? Wouldn't this increase in Cosmic Rays also affect humans, animals and plant life dna on Earth?

We should keep an eye on this.

edit on 12-11-2018 by ElectricUniverse because: correct comment and link.

Oh well Insurance will cover their rebuild in the same place and lots of jobs for illegals will be created.

Southern California is turning into Desert , It doesn't rain but once or twice a year not much can be done Mother Nature will burn away the dead brush and leave us with sand . So yeah the climate is changing I blame it on the tilt of the Earth .

posted on Nov, 12 2018 @ 03:43 PM
link
Do you have any information on how the data for that website is collected? I can't seem to do so. Nor can I determine what the values represent.

I'm wondering how might the cosmic energy effect the winds? Perhaps more intense, more concentrated, more widespread, more erratic, more something else? Might that be a factor?

posted on Nov, 12 2018 @ 04:07 PM
link
I have a question. If this cosmic radiation is hitting the earth, would it not be in a generally balanced spread? That is would it not blanket the earth to the same amount everywhere? This suggestion that certain areas have specifically intense bombardment seems to far fetched to take at first blush.

A conspiracy theorist might suggest that it was aliens or even God that was targeting these areas. From the picture you offer it would seem that the areas affected the most are liberal areas, generally the west coast of the US and in western Europe. Might this mean that God or the aliens are Republicans?
Conspiracy theorists say '' yes''.

They need to enlist Native Americans to do preventative controlled burns, like they used to for thousands of years, before we wiped them out.

But instead we'll just blame it on "Climate Change" (all of our fellow citizens for living in modernity), and throw conniption fits and bark at the moon.
edit on 12-11-2018 by IgnoranceIsntBlisss because: (no reason given)

The admin of that site also has another site for an iphone app that can detect cosmic rays. The admin of the site is Tom Andersen, who is a software engineer with a PhD in physics.

He explains in another site that since 2014 he, and several physics graduate students have been running the Crayfis experiment with their iphone app.

originally posted by: TerryMcGuire
I have a question. If this cosmic radiation is hitting the earth, would it not be in a generally balanced spread? That is would it not blanket the earth to the same amount everywhere? This suggestion that certain areas have specifically intense bombardment seems to far fetched to take at first blush.
... 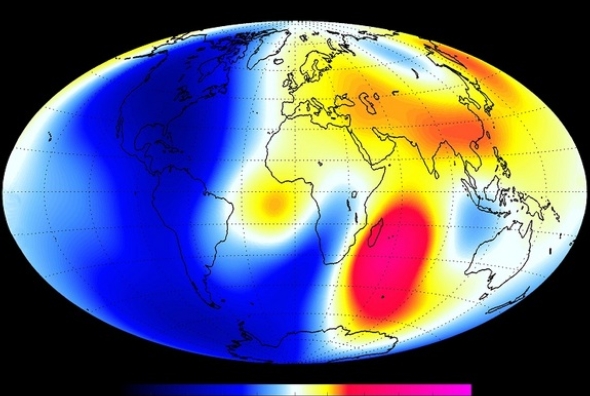 First, it's not actually cosmic rays which are being detected in most cases. It's secondary radiation, neutrons produced by cosmic rays hitting atmospheric molecules.

Elevation will affect the readings, but other than that it's pretty uniform since cosmic rays are highly isotropic. The higher you are, the more exposed to cosmic radiation because the atmosphere is pretty good at filtering it.


Here's a source. But some of the links are dead.
cr0.izmiran.ru...

Cool.
I heard about that app a while ago.

Looks like California is where it's used most. So not a real wide sample or consistent sample.


Right now the results obtained with Cosmic Ray app while neato and all that, lack that ability that the internet gave us – namely to network! 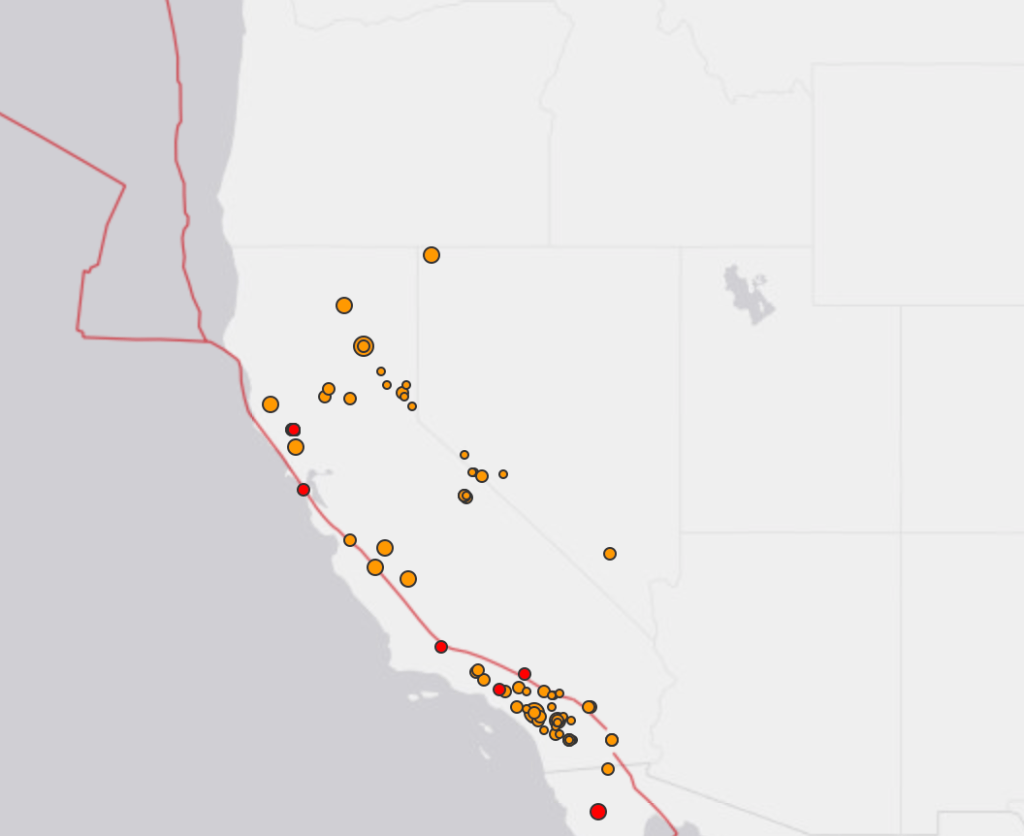 Anyway, just to add, according to NASA one of the fires in California was started by a camp fire.

That's the name of the fire. Named for Camp Creek Road.
www.sacbee.com...

originally posted by: Xcathdra
So whats the cause of the fire?

Phage is leaving out the fact that the strength of Earth's magnetic field also affects on whether or not cosmic rays penetrate our two barriers and hit Earth's surface.

Of course the strength of the cosmic rays will decrease as they keep on colliding with atoms in our atmosphere/magnetic field.
But if the primary cosmic rays have enough energy, greater than 500 million electron volts, the atmospheric cascade they produce will reach Earth's surface.

In another thread I showed how back in 2008 the cosmic ray energy increase hitting Earth had increased to 300-800 billion electron volts.

Since then cosmic rays reaching our Solar System and Earth have continued to increase, which means more and more nuclear byproducts produced by the cascading effect of the primary cosmic rays are reaching Earth's surface.

Thank you for that. So, if holding to the ''theory'' presented above, the increased radiation has been and will be effecting places on the globe that have weakened magnetic fields, yes? And if so, is the magnetic field just a fluctuating thing or is it in a state of transformation as well, that is is it's fluctuation on the increase?

And to the conspiracy side of the question, can the magnetic field be orchestrated by humans as a weapon to allow for specific targets of radiation from space.


In another thread I showed how back in 2008 the cosmic ray energy increase hitting Earth had increased to 300-800 billion electron volts.


There are always cosmic rays of that energy (and higher, much higher) hitting Earth. But yes, an unknown source of a high flux of such particles was discovered in 2008.

The most powerful or highest-energy cosmic ray ever measured was detected over Utah in 1991 by the University of Utah’s Fly’s Eye observatory at the U.S. Army’s Dugway Proving Ground — a predecessor to the Telescope Array. That cosmic-ray particle carried energy of 300 billion billion electron volts.

originally posted by: Gargoyle91
a reply to: ElectricUniverse

Southern California is turning into Desert