page: 1
23
log in
join
share:
randomtangentsrme
+1 more
posted on Oct, 7 2018 @ 05:46 PM
link
Happy October everyone. In interest of having some nonpolitical content here is a summation of my favorite crypto in pop culture.

The werewolf lore is traced back to at least 1 A.D. (link states 1550 BC [BCE] other links state 1 AD [CE]) whereas a legend told of King Lycaon who offended the gods by serving human meat to them at dinner.
Lycaon is the base of the word Lycanthrope.
www.thefreedictionary.com...
www.werewolves.com...


What is a werewolf?

In a nut shell, depending on which lore you follow, a werewolf is a human who can become a human/wolf hybrid or a human who turns to a wolf.

In the former situation, we have an anthropomorphic wolf like creature that walks on two legs, but has the animalistic instincts and desires of a carnivore.

In the latter, we have a situation of full transfiguration, where a human transforms into a wolf. Sometimes retaining its human brain in the process. Again, depending on lore.

Obviously there are variants upon these themes in pop culture and modern literature.

How to become a werewolf?

Depending on the lore, you have to be bitten by a werewolf, drink a potion, have a special belt or girdle (or full wolfskin). It could also be hereditary.
www.werewolves.com...

Werewolves are solitary beings, potentially as a result of once being human. While territorial they rarely look to attack humans as a food source. They often are depicted of having a mix of human intellect as well as a wolf’s cunning.

How to spot a non-transformed werewolf?

Some ways are an eyebrow that is continuous over both eyes
Hair on the palms of the hand
The index to ring finger all being of the same length.
Or the index finger being longer than the middle finger.
A scar in the shape of a pentagram.
A taste for raw or undercooked meats.

How to kill a werewolf?

Silver bullet is the most agreed upon method. Although some suggest there are other ways, like drowning or fire, etc. Experts suggest the best option if meeting a werewolf is to run away. 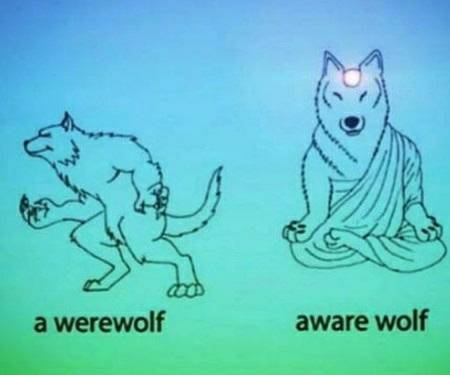 (Sorry, came across that picture today; made me chuckle. Then saw this thread. )

I for one, welcome our Lycan overlords. Always loved The Howling movies.
edit on 7-10-2018 by Kromlech because: (no reason given)


I will also use this post to also mention hypertrichosis. Which I did not mention in the OP.
The condition could be a reason the werewolf legend is historically ingrained in multiple cultures.

posted on Oct, 7 2018 @ 06:34 PM
link
Nephilim
and their hybrids
having a servere allergy to silver entering tissue/bloodstream makes sense!

Do you think that werewolves are decedents of Nephilim?
That is an angle I've not heard before.

posted on Oct, 7 2018 @ 08:28 PM
link
Darn, I thought I was possibly a werewolf but my ring finger is way shorter than my middle finger. Bummer, guess I am just a big mouse after all.

Give me the amulet you beech!

You should check this out for a different take on the Werewolf.

posted on Oct, 7 2018 @ 10:26 PM
link
Nice recap on the subject.
I found out lately that Wisconsin has had the most werewolf sightings--sometimes mistaken as other cryptos, such as sasquatch-- encounters of any state. It tops in wendigo and skinwalker sightings as well. In part to due with lore of the area, like the terrain, though which varies from other states and areas that have similar sightings. I wonder what else contributes to larger amount of sightings.

posted on Oct, 7 2018 @ 11:10 PM
link
Interesting!
You might want to check out the work of Linda S. Godfrey. She has written several books on the topic of wolfmen and other cryptids, describing lots of sightings, although she doesn't claim those wolfmen to be werewolves.
There are quite a few interviews with her on youtube, discussing her books and some of the sightings people have reported to her.