Why in the world would a victim need to be FORCED to testify?

originally posted by: Metallicus
a reply to: Xcathdra

I really hope Ford and Feinstein get sued into bankruptcy for their lies and trying to destroy a man's life. If this goes unpunished we are simply inviting more of the same in the future.

I will be willing to bet you ALL the internets that that never happens though. I wonder why?

Senator Lindsey Graham swears that there will be a thorough investigation into all of this. Based on his actions lately, I believe him.

From what I have seen there are 3 investigations.

Fords key "corroborating witness" told the FBI she was contacted and pressured by Ford allies for her to change her response from I believe Ford but dont know what she is talking about to supporting and corroborating Fords claims. That info, and the text messages proving it, were turned over to the FBI during their supplemental background check that democrats / Ford demanded.

How much should we bet the last supplemental investigation into Kavanaugh not only exonerated him but implicated Ford and Democrats in criminal activity. 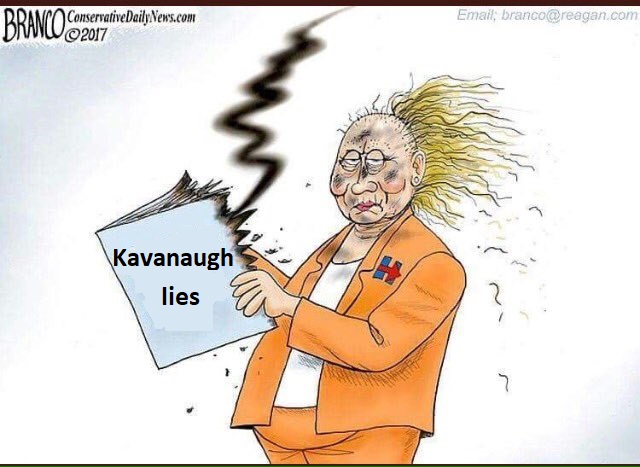 I see you are neglecting to mention that the American Bar Association is investigating Kanavaugh now.

Or mention his blatant perjury.

I can admit that there is no way to know if Ford was telling the truth or not. How can you blatantly lie about Kavanaugh?

Here are two of the big ones because I know you "forgot" them.

He said (under oath) that he only found out about the second accuser when the wapo piece hit. There is direct subpoena-able evidence that this is not true.

He said he had no knowledge of stolen Democratic data during his time in the Bush administration. Again there is direct subpoena-able evidence that this is also untrue. Why weren't the committee members allowed to see 100k+ pages of his documents during this time?

And the cherry on the top is, why are you still framing this as "he said, she said"? Where is the direct action on lieing under oath? Why are you supporting a two tiered justice system?

Considering Kavanaugh and the allegations against him dealt with sexual assault stuff the others issued you raise have no relevance to that issue. Nothing Ford Ramirez / lawyers provided corroborated any claims made against him. If anything it further undermined the accusations they made.

Secondly the American Bar Association is not investigating Kavanaugh. What they are doing is reopening his evaluation from 2006 so they can add the bull# temperament accusation by Democrats. The board of the ABA already distanced itself from the claims made by one of its members and put out a letter contradicting that members position. The ABA also called for a halt to the confirmation process to investigate however the ABA doesnt seem to understand how background investigations work let alone the fact the Senate is the primary investigative entity for this. Also you may want to look at the makeup of the ABA before making false claims considering most are liberals who support Democrats.

Democrats like to use the line this is not a courtroom for their hearings while at the same time remain hypocritical on the topic. His temperament at the time was not that of a judge overseeing an active case. It was a man who has been falsely accused of sexual assault with no corroboration from the accusers. Only when Ford blew up in Democrats faces did they seize on temperament. A last ditch effort to get their way or destroy the man, which they failed at.

Any reason you mislead people about the ABA and Kavanaugh?

As for perjury, again, being thrown around tells me people dont adequately understand what perjury is and whats required to meet legal standards. Perjury requires a person to give a factual statement under oath knowingly/premeditatively that the statement is false. The word you are looking for, and the word so many Democrats / liberals / Comey used to exonerate Clinton illegally is intent. At no point did Kavanaugh do this, contrary to the straw grasping left.

Any reason you omitted facts and legalities for your perjury accusation?

As for his time in the Bush white house what part of white house counsel confuses the left? While government lawyers do not enjoy the privilege of attorney client privilege, they are still bound by executive privilege, classified information and the inability to legally disclose legal document information when he is not a party to the information in question. In those instances he reviewed the info in order to forward it to the right person or to review legalities contained in it.

Tell us - what exactly is in the WH files in question and how does it relate to Kavanaughs time on the federal bench?

Democrats know this however they also know the average person does not. Allowing the left to make accusations they know are false in order to cast suspicion and not truth. Democrats are trying to use FOIA to get the info but they wont be successful since most of what they think they want is foia exempt under deliberative process exceptions.

As for He said she said well it is exactly what happened. She accused Kavanaugh (along with 2 other women) and yet provided absolutely no corroborating info / witnesses or evidence. The witnesses Ford named refuted her claims and had no idea what she was talking about. The same is true for the ramirez lady. Swetnick is a different area al together because she flat out stated she was intoxicated and could not remember for sure.

It is legally required for an accuser (and government if prosecuting) to support their accusation. If nothing supports it legally or civilly then it is in fact she said he said.

Next time, before the snark and accusation against me, maybe you should do a bit more research, understand what it is you are talking about and the legalities involved before engaging.