US saying they have proof Assad will use chemical weapons; same old lie

You talk about Russian propaganda, please, you're so saturated by Western propaganda that you talk as if every word you type is fact

Guess you missed the report on Israel supplying ISIS:

Israel secretly provided weapons and equipment to Syrian rebels fighting to overthrow President Bashar al-Assad, according to two recent reports that appeared to confirm long-standing suspicions on ties between two factions of the seven-year civil war in Syria.

And of course, it's already widely known that the US has been supplying terrorists in Syria for quite some time now

REYHANLI, Turkey – U.S. military equipment and ammunition, sent to Syria as part of a failed Obama administration plan to find and arm moderate forces to defeat ISIS, were instead simply handed over to an Al Qaeda group, according to the man who said he himself brokered the deal.

US Defence Secretary Donald Rumsfeld helped Saddam Hussein build up his arsenal of deadly chemical and biological weapons, it was revealed last night.

Additionally, I'll keep it civil if you lose the conjecture talk and keep it factual

posted on Sep, 10 2018 @ 09:28 AM
link
Same old nonsense. One of those previous attacks, I don't recall which, I'm convinced what happened was Syrian or Russian bombs hit a Rebel warehouse where chemical weapons had been stockpiled. Of course, the question of why those chemical weapons were there was totally ignored...

You specifically said that the West had been supplying chemical weapons to (I assume) the anti Syrian groups in the current conflict. When you have some evidence please post. It would be interesting an interesting read. But don't bother (as I said) posting Russian propaganda pap as that's not evidence.

I am agnostic of the side in the Syrian civil war and the rise/fall of ISIS and their failed Caliphate. But I do like facts and civility.

If your country is in the fight for its life against a militant grouped being funded, armed and driven by external proxies... you fight to the death! You slaughter anyone who sides with the enemy.

I wouldn't call innocent civilians who happen to live in a besieged area as "siding with the enemy". But slaughter them too I suppose.

The US, British, Australians would all do the same.

As if that makes it right.

And I'll be the first to admit we're probably doing more harm than good, as seen with most of our recent foreign interventions.

You've gone from accusing me of saying I don't believe chemical attacks happened in Syria to now saying I said the West supplied chemical weapons in Syria, neither of which I did.

The second part possibly, first? I'm not feeling it

posted on Sep, 10 2018 @ 10:03 AM
link
Right before the last bombing we done on syria we had the stormy saga playing out until it was buried by the supposed gas attacks.

originally posted by: Zcustosmorum
You've gone from accusing me of saying I don't believe chemical attacks ...

Nope. I have not accused you of anything. However, you have said that the West supplied chemical weapons to (I assume) the Syrian opposition. I'd love to know more and see the evidence. That's really part of this discussion as the Russians are lining up a "blame the West" narrative in their briefings that the UK/US are preparing for a chemical weapons atrocity.

Looking back, it is possible that you were referring to the Iraqi use of chemical weapons 40-50 years ago. If that's the case then say so, but I read it to refer to the here and now, as that is what the OP is about. For information the Halabja chemical attack was the most prominent attack by Saddam, but not the only one. Much of the precursor chemicals came from places like Singapore, the Netherlands and Germany. The delivery was via Russian made aircraft and helicopters in Russian-made bombs. The US were complicit because they sought to protect Saddam.

With the Syrian conflict in these times there's a lot of propaganda from all sides, the reality on the ground in Syria gets lost in all of it.

Everyone would be wise to take any news and information on Syria with a grain of salt, and a healthy dose skepticism.

I don't think anyone knows what's actually going on in Syria anymore.

That's unfortunate no matter who's propaganda you've accepted as truth.

Much of the precursor chemicals came from places like Singapore, the Netherlands and Germany

Nope. I have not accused you of anything. However, you have said that the West supplied chemical weapons to (I assume) the Syrian opposition.

You haven't accused me and yet you contradict yourself in the space of 2 sentences? Additionally, if it's known that the US and Israel have been supplying terrorists in the country, how do you know they haven't been supplying chemical weapons to them? There are Russian reports to suggest that this is the case, however unlike you, I will acknowledge it's conjecture, albeit very plausible conjecture, but it's the also the same conjecture in which you're trying to accuse Russia and the actual government of Syria, who as I recall invited Iran and Russia into the country, and not the United States.

And the terrorists in Syria, like, as you say, Saddam and Iraq, are being 'insulated' by the US, once again

Look, this isn't complicated, the aggressor in this conflict is the US, and they will use any reasoning they want, even if they have to make it up, not for the first time, or the last I suspect. 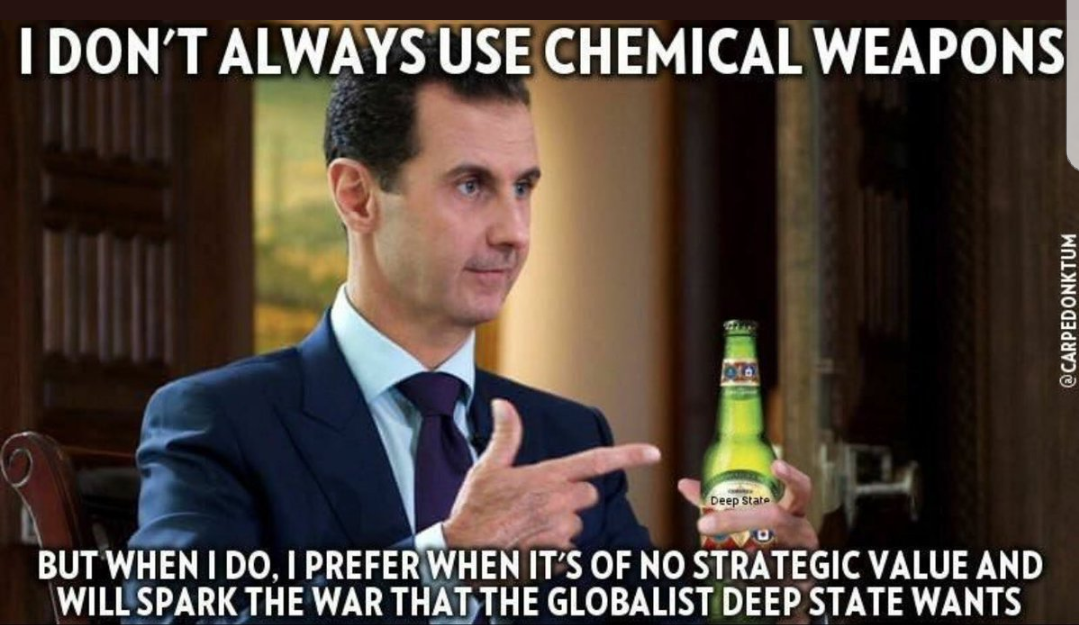 Do you believe a media that lies through their teeth? Or General Mattis who relies on Military Intelligence?


Speaking in absolutes is exactly what the western media does. Usually "anonymous sources" are cited, and proof is never offered. Gas in Syria to MH17, absolute bull# is what the mainstream media offers.

Assad is now winning the war to get his country back, and there is no advantage gained for him to gas his own people. The only advantage is to the western propagandists.

Agreed, it is a total and absolute lie.

Assad/Putin are about to put an end to the civil war, reunifying the country under the Syrian government (vs. radical terrorist insurgencies)

The ONLY thing that could potentially harm that effort is US involvement. And the only way that happens (still unlawfully, of course) is their use of chemical weapons. Never mind the fact that it isn't our business or frankly our concern, it would appear the allegations are invented entirely. We should expect this type of crap from TPTB though, and assume everything is a bold faced lie until they provide sufficient documentation and prove their claims.

Looks like we/our allies shouldn't have "meddled" in the Syrian civil war. We have no business being there in the first place, and certainly no right to impose our will on a sovereign nation. I say let Assad terminate the insurgent groups and end this disastrous civil war

posted on Sep, 10 2018 @ 02:07 PM
link
IMHO. It's about time Americans woke up. You are fed propaganda daily from "over 9000" media networks all spewing the same demonising hate-bull# but consider it OK to drop bombs on sovereign countries that have never done a single thing to the USA or any of its citizens yet many Americans seem to try and legitimise said bombing because you have been told Assad (or other name) is bad. Iraq, Afghanistan, Libya, Syria, Iran....

Wake The # Up and smell the napalm!

Your MIC is out of control and no citizen can do a thing to change that. It's all about money and power. The more bombs dropped, the more the tax-payer is burdened and the more profit a weapons manufacturer makes. It really is that simple.

America needs an enemy, whether it be English, Russians, Communists, Nazis, the Chinese... The worst part of it is, you like to form coalitions with other countries in a sordid attempt to legitimise your military violence and get the rest of the world to help. Disgusting.


Virginia State Senator Richard Black has claimed UK intelligence was planning a chemical attack in Syria, which they would then blame on the Syrian government. Black made the claim after a meeting with President Bashar Assad.

Interesting, I'm also still trying to figure out the purpose of those 2 F-15s dropping phosphorus on Syria yesterday, other than starting fires in the vicinity, I think there's an ulterior motive

Or it is simply Russian and pro-Russian outlets spinning a fake news story? The story with the claim of "banned phosphorus bombs" certainly get the headlines going and diverts attention.

Nothing unusual about the Russian military making things up and especially in relation to Syria. I feel sorry for those commanders that are rolled out to deliver the presentations to the media.

originally posted by: CriticalStinker
a reply to: Grambler

He is a brutal dictator, there is no denying that.

Eh, Yes there is.

Nothing unusual about the Russian military making things up and especially in relation to Syria. I feel sorry for those commanders that are rolled out to deliver the presentations to the media.

Yeah, I mean so Nikki Haley in style