posted on Aug, 30 2018 @ 12:35 AM
link
This was a quick find while I was trying to read for a related topic for another thread. I was reading this article (translated in English for your convenience) which mostly focuses on the political and strategic decision for being in East Syria, primarily to curb Iranian influence in those regions as we work to reduce their threat towards Israel. Anyways there are allegations that we (USA) have setup some radar installations in preparation for the possibility of an air/ground embargo over the areas under SDF control. So I went researching and found the Army has in fact recently begun the process of installing some radar sites. Who knows if they will be attached to any anti-air defense systems.

In addition, leaks were issued about Washington's installation of sophisticated radar equipment at two military airports near Ain al-Arab and Rumailan, as part of a plan to implement an "air embargo". Turkish media quoted local sources as saying that "Washington has deployed three advanced radar systems in the Tel Baidar, Ayn al-Arab and Surin areas, as well as 13 portable and fixed radar surveillance and reconnaissance systems." This coincided with reports that the new US envoy to Syria, James Jeffrey, formulated recommendations for the administration in the White House, including the imposition of an "air and ground embargo" in the north and east of the Euphrates River to prevent Iranian and Syrian forces from moving militarily towards those areas.

"The US air and land embargo serves and protects the territorial integrity of Syria against Turkey's projects in the region," Sihanouk Dibu, a presidential adviser to the Democratic Unionist Party, told The News. "This American development may be in coordination with Russia ... and it is not at all inconsistent with the step of dialogue with the government," DePo said.

Thats cool I guess. I found the video on twitter, which I will embed in a moment after I finish up two other threads shortly.

The U.S Army has started to install advanced radar systems at their air bases from #Rojava to establish a no-fly zone for the areas controlled by the #YPJ/#YPG[/url]

I just thought that would be of interest to all the sky watchers out here, especially since one of the threads I am about to post is asking for help to identify some anomalous craft flying over those areas.
edit on 8-30-2018 by worldstarcountry because: (no reason given)

posted on Sep, 1 2018 @ 12:54 PM
link
If they're in east Syria then they'd be around At-Tanif. That's kinda the area most directly US-sponsored forces base out of. It allows easy resupply from Jordan and kinda telegraphs to the Russians and SAA that we're sticking to killing ISIS.

We definitely don't have aircraft flying out of Syria proper. Far too vulnerable. Notice how they never say where they are. This is an older video but I'm willing to bet dollars to donuts that it's Jordan. Not going to say where in Jordan.
edit on 1-9-2018 by hawkguy because: clarification

The primary purpose of Tanf is to interrupt the direct land route from Tehran to Damascus. Also as you stated is to run supplies from Jordan, but it gets airlifted from there or directly from elsewhere to the various bases we have established in Rojava. There was a map that the Turkish government leaked last year, but there was some very angry retribution for doing so and those images were scrubbed really fast and quite thoroughly.

I am certain I can still find it with a bit of thorough searching myself. These advanced radar sites each may indicate the positions of a FOB or airstrip of some nature nearby. The 14 portable and fixed radars may be indicating a handful of other assets nearby, such as missile batteries, air defense systems, or multiple launch rocket systems and such.

Ok I did find it, but not in English. I'll see about getting it translated later and reuploading in English. Im really hungry right now though so will just do this for now. 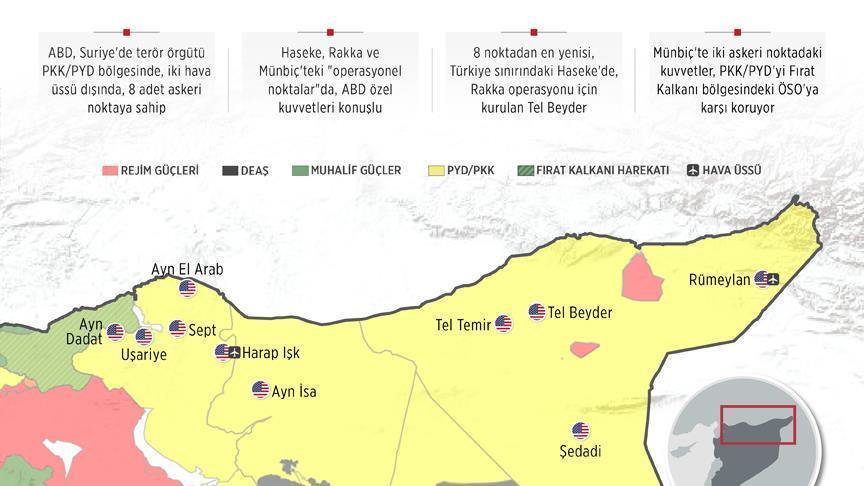 Notice that three locations mentioned, Rumaiylan, ain al-arab, and Tel Baidar are right along the Turkish border. I take this to mean they will be keeping Turkey from conducting wanton air strikes as it would always do into Iraq and Syria when attacking the PKK prior to this most recent engagement in the region. Also denies the skies now to Russia from that direction.

I found the map of French Bases as well. 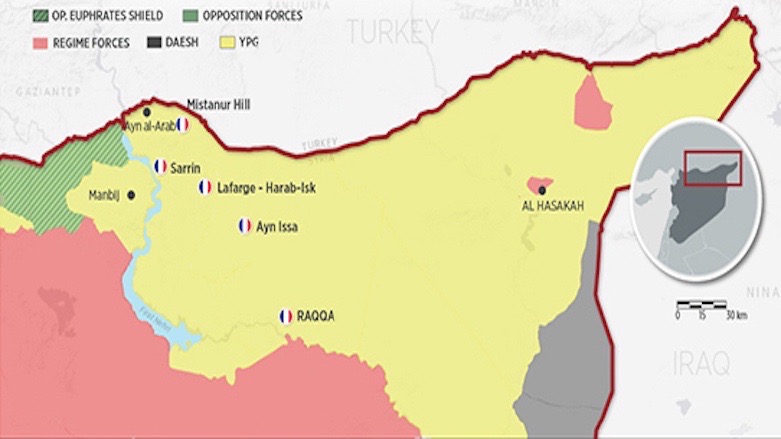 A map showing the French military bases in northern Syria, April 27, 2018. (Source: Anadolu Agency)
edit on 9-2-2018 by worldstarcountry because: (no reason given)

Some of those US ones are accurate and current. The MLRS avenue is correct, mostly with HIMARS. We like to provide fires for our allies and dudes like to be rotated in, get their CAB/Right arm patch and then rotate out. The US and French forces don't cooperate too much anymore. At least where inherent resolve and most US forces operating out of Jordan is concerned.

posted on Sep, 7 2018 @ 02:54 AM
link
a reply to: hawkguy
Well the area has been pacified, so there really is not too much going on for them to cooperate on.