Now it reads, "Jacksonville Shooter Had Strange Online Profile and Bizarre Playing Style – Murdered 3 People (UPDATE)" and while there's nothing in the post about any "strange online profile," way down at the bottom is written, "UPDATE: An anonymous Reddit user was mis-identified in an earlier post."

So what happened? Turning to the Archive.is cache of the original, you'll see an erroneous claim that a Reddit account for the shooter had been discovered and among some number of his comments were anti-Trump sentiments. So sure was Hoft, that in his boundless hubris and infinite self-righteous indignation, he closed the post thus:

So will Democrats be forced to disavow this crazed killer by the media? I think we all know the answer to that.

And why was he so positive? Well he had not one but two embedded tweets in support of this identification. The first, a now deleted tweet from self-proclaimed "journalist" Mike Cernovich:

Today’s mass shooter was a member of the Resistance who referred to Trump supporters as “trumptards,” a review of his reddit history reveals.

and another tweet from Daily Caller's Ian Miles Cheong which has not been deleted (though 15 minutes ago he tweeted a very unapologetic retraction): 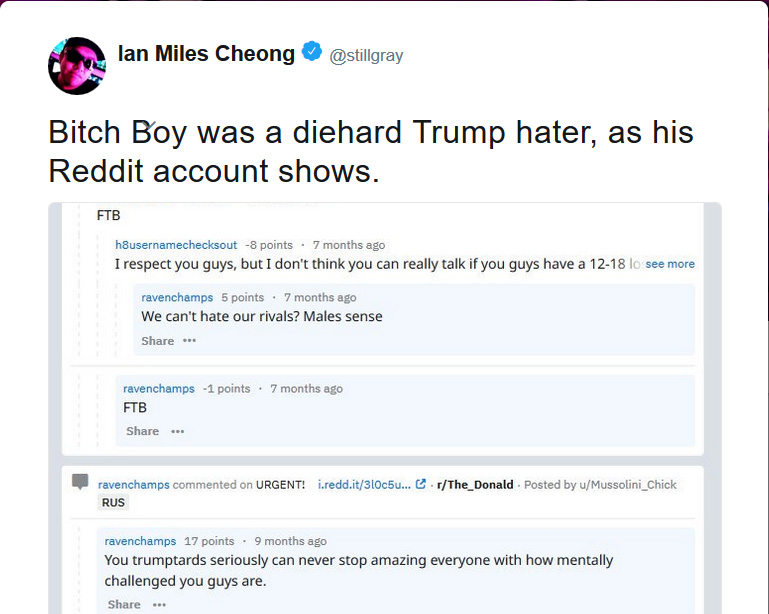 You can probably guess how this played out because this is becoming a fairly regular occurrence: the actual owner of the account, shocked to have been misidentified as a mass shooter, logged in and posted that no, he was not actually the dead mass shooter.

Turns out these folks felt perfectly comfortable making their claims based on the fact that the shooter was known to use the username "Raven2012champs" and the Reddit account that misidentified as belong to him was "Ravenchamps" — clearly, open and shut.

Okay, so sometimes people get it wrong. It happens. It's even more likely when one is scrambling to get out that fresh hot viral propaganda. But this is far from an isolated incident or infrequent occurrence. This is at least the fourth time Hoft has published a similar misidentification in the last two years:

This is not the first time Gateway Pundit has misidentified someone who committed an attack or mass shooting. The site said the Charlottesville car attack was conducted by an "anti-Trump protester" who in reality was hundreds of miles away at the time of the attack. The site also named the wrong person in the Las Vegas mass shooting, and spun an elaborate conspiracy based on an anonymous Twitter post which identified the wrong person in a mass shooting at the airport in Ft. Lauderdale, Florida, in January 2017.

That's a pretty poor record.
edit on 2018-8-28 by theantediluvian because: (no reason given)

I think anyone willing to politicize a lunatic's atrocious actions hours or days after the event is pretty sick no matter what angle is taken.

Psychos are psychos, what's the point of trying to group them in with people who had nothing to do with their actions?

Edit:Media outlets (I'm being polite by calling gateway pundit that) should be open to civil action for falsely attaching someone else to an effing murderer though. This guy on reddit should lawyer up.
edit on 28-8-2018 by CriticalStinker because: (no reason given)

posted on Aug, 28 2018 @ 12:19 PM
link
Waiting for the Presidents Tweet on The Gateway Pundit being fake news and an enemy of the people

Agreed, and I think it's evident that people get off on that. Attaching ideology to someone who clearly isn't sane or sensible doesn't do anything, it's just a veiled attempt to varnish people not even associated with a tragic event that just happened.

posted on Aug, 28 2018 @ 12:32 PM
link
I did not even know who this hoft guy is. Maybe you should just stop reading his nonsense seeing as nobody on here even seemed aware of such accusations based on three of the threads I participated in. But of course I get called crazy for suggesting the possibility that private parties/government partnerships may have utilized magneto-thermal stimulation to enlist special operators and agents to influence targeted populations as outlined in the funding authorization signed by POTUS Obama at the end of 2016 for ndaa 2017 .

You are right to draw attention to this.

This to me illustartes two problems.

One, the desire to politicize every single shooting. Everyone is salivating at the chance to some how link the shooter to their political opponents.

And for the record, the most recent case of this was the killing (not shooting but same concept) of Molly Tiibbetts. Hey I am for border control as well, but acting like that one incident is indicative of all illegals is ridiculous.

And as you point out, often times in a rush to politicize these evnts, facts are gotten wrong and innocent people aee smeared.

The second thing worth pointing out is that there are people who seem to fall in to this "mistake" over and over. Well I am sorry, if you continually make this "mistake" it starts to seem anything but.

To me this seems like a case of trying to smear a political group, facts be damned.

It should be called out, and should also make anything else these people say suspect if it happens over and over again.

originally posted by: worldstarcountry
I did not even know who this hoft guy is. Maybe you should just stop reading his nonsense seeing as nobody on here even seemed aware of such accusations based on three of the threads I participated in. But of course I get called crazy for suggesting the possibility that private parties/government partnerships may have utilized magneto-thermal stimulation to enlist special operators and agents to influence targeted populations as outlined in the funding authorization signed by POTUS Obama at the end of 2016 for ndaa 2017 .


Jim Hoft is the writer of the Gateway Pundit article in question. I KNOW for a fact that people around here, which I'm assuming includes yourself, have heard of Gateway Pundit. They are used all the time as proof to support right wing crazy stories.

posted on Aug, 28 2018 @ 01:03 PM
link
a reply to: Krazysh0t
I have seen the name (GP) in sources before yes. But it's Almost always political threads which I pretty much avoid getting worked up over. I am only in this one because it involves the jville killer and I like to spread awareness of the funding for special operators and agents to influence targeted populations approved by Obama for NDAA 2017 as well as the works of arndt praille at University of buffalo, new York in magneto-thermal stimulation (brain hijacking)

Most people. Some are a little more special than others, especially here.

Well then look at the OP story like this:

A right wing publication in an attempt to sell news clicks found a similar reddit handle of the shooter in question. They then announced to the world the handle is the same. The user in question voiced up and said that nope he is not the shooter. The publication isn't recanting its story or apologizing though, instead opting to delete their exposure.

If you check out the reddit AMA thread that was posted earlier in this thread, you'll see that this behavior extends to the r/t_D and r/TheGreatAwakening and even r/politics and r/conspiracy subreddits where mods are banning this reddit user instead of admitting they were wrong about claiming he was the shooter.

This OP should serve as a nice indicator that the Gateway Pundit shouldn't be trusted.
edit on 28-8-2018 by Krazysh0t because: (no reason given)

posted on Aug, 28 2018 @ 01:12 PM
link
I really don't understand why anyone continues to treat Gateway Pundit as a reliable source. Just go back and look at the ridiculous claims they made before the election. If we go by their stories Hillary was arrested about 50 times.

originally posted by: subfab
a reply to: theantediluvian

I second this. It's pretty funny.

posted on Aug, 28 2018 @ 01:16 PM
link
a reply to: Krazysh0t
Well then it is a good thing I do not read it. Honestly I mostly read foreign news and my own local news. Domestic is not really doing a thorough job of covering the ongoing third global war, which is more concerning to me than Global Engagement Center produced scripted theater.

One day this country will get it's legitimate journalism back.

I find gateway pundit to be highly suspect.

I would not believe anything they say without definitive proof, or more reputable places also reporting a story.

Thats not to say I wont look at material if someone posts it from them; but i immediately am skeptical, even more so than with places like cnn.

posted on Aug, 28 2018 @ 01:20 PM
link
I almost forgot that the idiots of Gateway Pundit are also accredited by the Trump White House. Lmao.

Why am I not surprised.

As far as Cernovich goes, for me, he outed himself with his efforts to shut down that shakespeare play where a charcter dressed like trump gets murder.

This guy made his image on making fun of SJW's for being snowflakes, and complaining (rightfully so) for them trying to censor consrevticves.

SO how does he respond?

By being a snowflake, and trying to censor something that I didnt find to be in the least bit offensive.

Sorry, I dont like hypocrites, no matter what political affiliation they have.

And this story shows that again there is hypocritical behavior; he rallies against the msm and fake news, and yet makes a fool of himself smearing an innocent person in a rush to blame this killing on liberals.