Study: 'Medicare for all' projected to cost added $32.6 trillion

Sen. Bernie Sanders' "Medicare for all" plan would increase government health care spending by $32.6 trillion over 10 years, according to a study by a university-based libertarian policy center.

I will point out this was a university study under a libertarian policy center. That said, even if we cut the number in half it would still be astounding.

The latest plan from the Vermont independent would require historic tax increases as government replaces what employers and consumers now pay for health care, according to the analysis being released Monday by the Mercatus Center at George Mason University in Virginia. It would deliver significant savings on administration and drug costs, but increased demand for care would drive up spending, the analysis found.

The Mercatus analysis estimated the 10-year cost of "Medicare for all" from 2022 to 2031, after an initial phase-in. Its findings are similar to those of several independent studies of Sanders' 2016 plan. Those studies found increases in federal spending over 10 years that ranged from $24.7 trillion to $34.7 trillion.

"It's showing that if you are going to go in this direction, it's going to cost the federal government $2.5 trillion to $3 trillion a year in terms of spending," said Thorpe. "Even though people don't pay premiums, the tax increases are going to be enormous. There are going to be a lot of people who'll pay more in taxes than they save on premiums." Thorpe was a senior health policy adviser in the Clinton administration.

I've noticed that single payer healthcare has been a huge topic in American politics recently. While I would be on board contingent that a luxury tax be placed on all consumables that are unhealthy (junk food, fast food, tobacco, alcohol ect.), so that more funding is put in by those who strain the system more. Hopefully, that would lead to better health in the coming generations.

Even that doesn't look completely viable with this new study though. When people talk about this issue they use other nations as an example. The problem with that is we are usually looking at countries 1/10 of our size both geographically and from a population standpoint. This is important because it has many implications on how we spend our money as a nation (think infrastructure and military).

How much does the American consumer and business pay a year for health insurance and copays?

That will be a number you need to factor in to get a real read if it would be worth exploring. 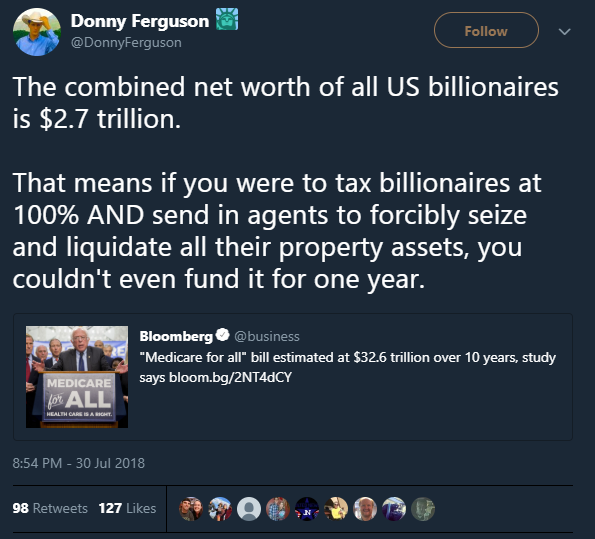 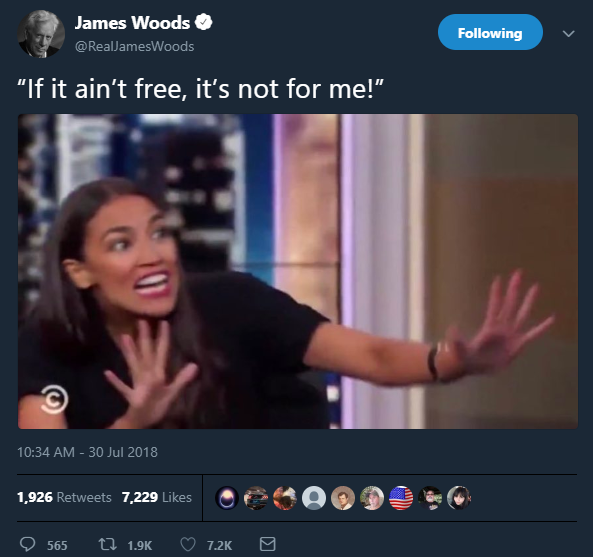 As usual they are looking at the problem from the wrong angle.
When the titanic was sinking, the water wasnt really the problem. The big fricken hole in the boat was the problem.

We need to fix the medical system not the insurance system. We can never afford to pay the for profit hospitals.

Substandard care with no vision or dental.

That's thinking with their dipsticks!

i have been thinking about that a bit lately.

lots of tax money to be had there

i dont mean medicare. well call it what you want.

health care for all though
edit on 30-7-2018 by TinySickTears because: (no reason given)

posted on Jul, 30 2018 @ 09:27 AM
link
Socialized medicine like in parts of Europe and Canada would be much better. We have too much greed in healthcare and too many people in healthcare that believe they have to run tests that are not necessary. Also people are asking for tests that are not needed. Colonoscopies are not needed unless there are some sorts of symptoms, Most people I know who got them had no problems at all. They are expensive. Yes, if there is a family history of colon cancer, they may be necessary, otherwise they are just a pain in the butt.

We need to go to socialized medicine for at least the basics and many specialists. If people want to purchase additional insurance, they can. We do not have a good healthcare system in this country and it is costing everyone megabucks. It is too profitable when people are sick. On top of that, they need to evaluate the food additives better and stop the nonsense that some good foods are bad for us, foods that actually increase our ability to reason have been considered bad for a while now.

I'll be here all week.

posted on Jul, 30 2018 @ 09:30 AM
link
Get rid of the single largest health care insurance provider in the country. The United States Government.

Right there would add over 120 million people in to the private sector.

Some folks want the state having a monopoly on a corporate product.
edit on 30-7-2018 by neo96 because: (no reason given)

And if the temp keeps rising as it did this morning, by friday it will be 250 degrees in the northern part of the US. Silly.


If medicare for all was put in place and used a Canadian model there would be strict pricing similar to other industrialized countries.

Would there be a glut of people wanting knees and hips replaced? Yup. We have a failed system now. It will collapse no one can keep paying 2 mortgages. One for the home and the other for piss poor insurance coverage. It will fail because it has to.

I would rather be a poor country full of healthy , happy people rather than a rich one full of the sick and unhappy.
edit on 30-7-2018 by scraedtosleep because: (no reason given)

Also, why are big businesses not screaming for this. This is a opportunity to say goodbye forever to expensive health care costs. Something doesn't add up.

Or is healthcare insurance a way to keep the worker bees in line and not seek other employment?

Or is a large number of Corps parent companies making money off sky high health care costs and there is a policy to keep the money rolling in and mouths shut?

I would rather be a poor country full of healthy , happy people rather than a rich one full of the sick and unhappy.

In 2016, private health insur­ance coverage continued to be more prevalent than govern­ment coverage, at 67.5 percent and 37.3 percent, respectively. Of the subtypes of health insur­ance coverage, employer-based insurance covered 55.7 percent of the population for some or all of the calendar year, followed by Medicaid (19.4 percent), Medicare (16.7 percent), direct-purchase (16.2 percent), and military cover­age (4.6 percent).

The increase represents a sharp uptick from 2017 spending, which the U.S. Centers for Medicare and Medicaid Services (CMS) now estimates to have been a 4.6 percent climb to nearly $3.5 trillion

So we already spend the 3.5 trillion a year on health programs. Essentially single payer would double that.

It would be hard to calculate how much citizens pay out of pocket per year though as many get health insurance through work.

We'll do a quick exercise though just to have something to go off of.

60% are under private, so now were at 180,000,000. Lets say that half have insurance through work (which is a conservative estimate post ACA).

Average cost per person is 320 a month, so that would be 693 billion just in premiums.

I tried searching real numbers to show what people who use private insurance pay per year (premium and services), but couldn't really find much.

The argument is some people don't want to pay for it, and think others should.

We're not Canada. We spend money differently, we have 10 times more people.
edit on 30-7-2018 by CriticalStinker because: (no reason given)

I would rather be a poor country full of healthy , happy people rather than a rich one full of the sick and unhappy.

Great logic, my whole point was what do we do with the hundreds of thousands of people working in that sector? Your altruism isn't working for them.

I contend that the US spends medical money "wrong". And yes the US is not Canada, but can learn something from "her".

No arguments here. Nothing wrong with taking notes, emulation doesn't always work though.

So the upshot is they estimated that Sanders's universal healthcare proposal would cost less than we spent in 2016 on healthcare?