There was a very interesting photo of a UFO, captured unintentionally, just a few days ago (May 2018). It was reported to MUFON a few days after he took the photo.

The guy was taking telescopic photos of the night sky.

The photo was 3 minute exposure, and the UFO appears twice in the same 3-minute photo. Which means the object flashed twice in 3 minutes. (If the object had been glowing steadily, then it would have appeared as a steady streak of light.)

It might not look like much at first, but I think this photo will prove to be one of the most amazing, and most informative, of all UFO photo's!

It is possibly the first photo showing a UFO flashing at rare times, like this. (Who would have thought a UFO would flash approx. once every 90 seconds?)

For those who would dismiss the photo as nothing more than the lights of an airplane showing up: That argument is compelling for the shape of the lights; however, that idea falls apart when we realize that an actual plane flashes EVERY FEW SECONDS. And all planes do this, because it's the way that their lights identify themselves as planes.

And so if the photo did show a plane, then the lights would have appeared EVERY FEW SECONDS, and would have left dozens of images across the photo. This is how we know it's NOT a plane.

Again, the photo's 3-min. exposure means that the UFO flashed twice in those 3 minutes.

And it's undeniable that the photo is showing 2 flashes in 3 minutes.

This photographed object is going dark for 90 seconds at a time, which doesn't fit anything that humans have flying through the sky!

posted on May, 17 2018 @ 03:35 PM
link
Aztec, does have a UFO history, it's close to Dulce and the San Luis valley. I spend a fair amount of time on the San Juan at Navajo dam and have seen moving lights in the sky. Interesting video....


nope....too slow to flash and everything else is wrong for general aviation or commercial, this is one rotating beacon?....naw
edit on 17-5-2018 by GBP/JPY because: (no reason given)

Well, there's no black outline shape of a plane, if that's what you're thinking of looking for.

However, would a dark outline really show up in a 3-minute exposure? Probably not... Because the stars' glowing for 3 minutes would far outweigh a brief passing of a dark object.

So, I'd expect any dark object NOT to show up in a 3-min. time-lapse photo.

Flashes, however, DO make sense that they could show up, even if it's a 3-min time-lapse. A quick, bright flash would be expected to show up exactly as the UFO shows up in the photo...

all the other strobes, man....i was lookin for the six other strobes....i'm a seasoned flyer type, being older than the hills now....seen it all

posted on May, 17 2018 @ 04:00 PM
link
^ Thanks for the responses. Right now, I'm excited as if this is one of the most compelling and informative UFO's ever photographed. Even though it seems to have gone under-the-radar (so to speak), for the most part, since it happened.

I appreciate the confirmation that it can't be a plane. Indeed, the strange flashing (2 times in 3 min.) really does rule that out.

I was just thinking that pretty much the only way that this is NOT an incredible photo, is if it was a deliberate hoax lol. Like the photographer could be PRETENDING that it's a 3-minute exposure lol.

But really, how likely is that, and what does the guy have to gain? A small paragraph listing on MUFON.com? There's nothing lucrative about that, at all lol.

I also don't think the guy has done any publicity about it all (AFAIK) but I'd love to be proved wrong on that. For example, I don't think he has done any interviews, or articles, or even internet discussion (AFAIK). (Again, please prove me wrong if the guy has become active about it, and I just haven't heard of it.)

posted on May, 17 2018 @ 04:17 PM
link
ive done many night time time laps movies and ive seen how a track of plane look like and thats not one of them thats for sure , but i cant say what this thing is

originally posted by: GBP/JPY
I was just now tryin to add more details but my computer refuses....in a way not seen before

I'm actually not clear what you're saying here.

I've been a member here for years but I haven't posted much. (I mostly just read the posts from time to time.) So if those are things which are familiar to the forum, I am not familiar lol.

What are you saying and what do you think about the photo?

A time-lapse photo that shows the pattern of a UFO might be the first time in history, right? A person couldn't do that if he wanted to lol.

originally posted by: Dr UAE
ive done many night time time laps movies and ive seen how a track of plane look like and thats not one of them thats for sure , but i cant say what this thing is

Thanks, I agree, this photo is very mysterious and compelling. All we know for sure is that the object flashed twice in the 3-min. exposure. And that rules out anything man-made (it would seem).

Considering it a secret government project also doesn't seem plausible, because surely the flashing was making the object visible. Imagine someone laying on the ground and star-gazing for those same 3 minutes. He would have definitely seen both flashes.

Hmm, unless the magnification is so great, and the object was so small and distant, that it would have been invisible to the naked eye? Maybe it would have only been the smallest pin-prick of light flashing, so small that a person wouldn't be sure if he actually saw anything at all?

It is just a commercial aircraft. It can be matched to a particular flight. The question is why are some people fooled by such things?

posted on May, 17 2018 @ 04:40 PM
link
Is it possibly a reflection on the objective lens of the telescope? Like a car's headlights or running lights? Or a neighbor's porch light?

Is it possibly 2 separate but identical objects appearing at the same time?

If the photographer is capturing 3 min exposures, he's got to be using a sky tracker to synchronize his exposure with the changing position of the stars. Is it possible that stationary, or very slow moving, near-field objects would present as a smear in a long exposure like this?

Just throwing a couple of suggestions out there for terrestrial explanations of this phenomenon. You have to rule out all of the obvious and simple stuff first before moving on the more "fantastic" explanations.

posted on May, 17 2018 @ 04:45 PM
link
Anybody got any other photos of airplanes captures in long night sky exposures to actually compare it to?

posted on May, 17 2018 @ 04:56 PM
link
a reply to: Blue Shift
Here's what a jet at night looks like.
The image in question doesn't look at all like any jet/plane I have seen, I don't know what it is, but it doesn't look like a plane.
wwwcdn.skyandtelescope.com...

A Boeing 777 landing showing how the strobe reflects off the inner sides of the engine nacelles. 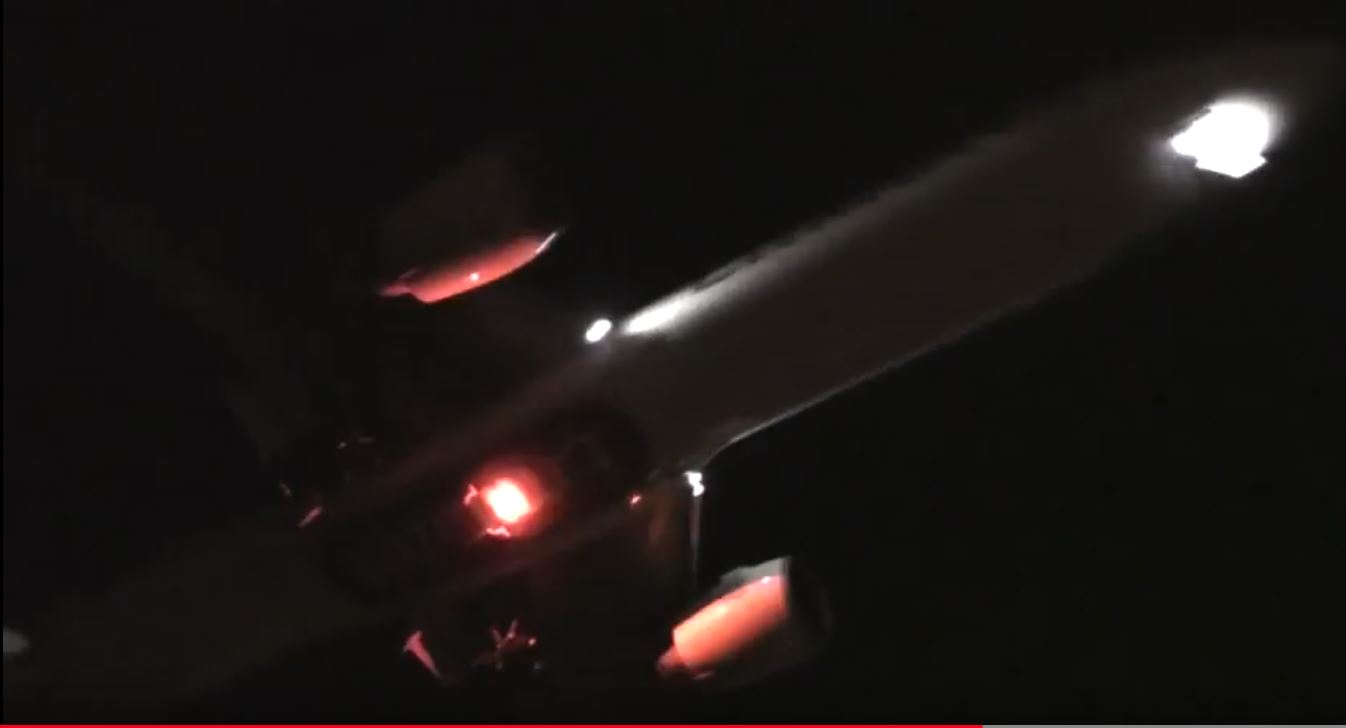 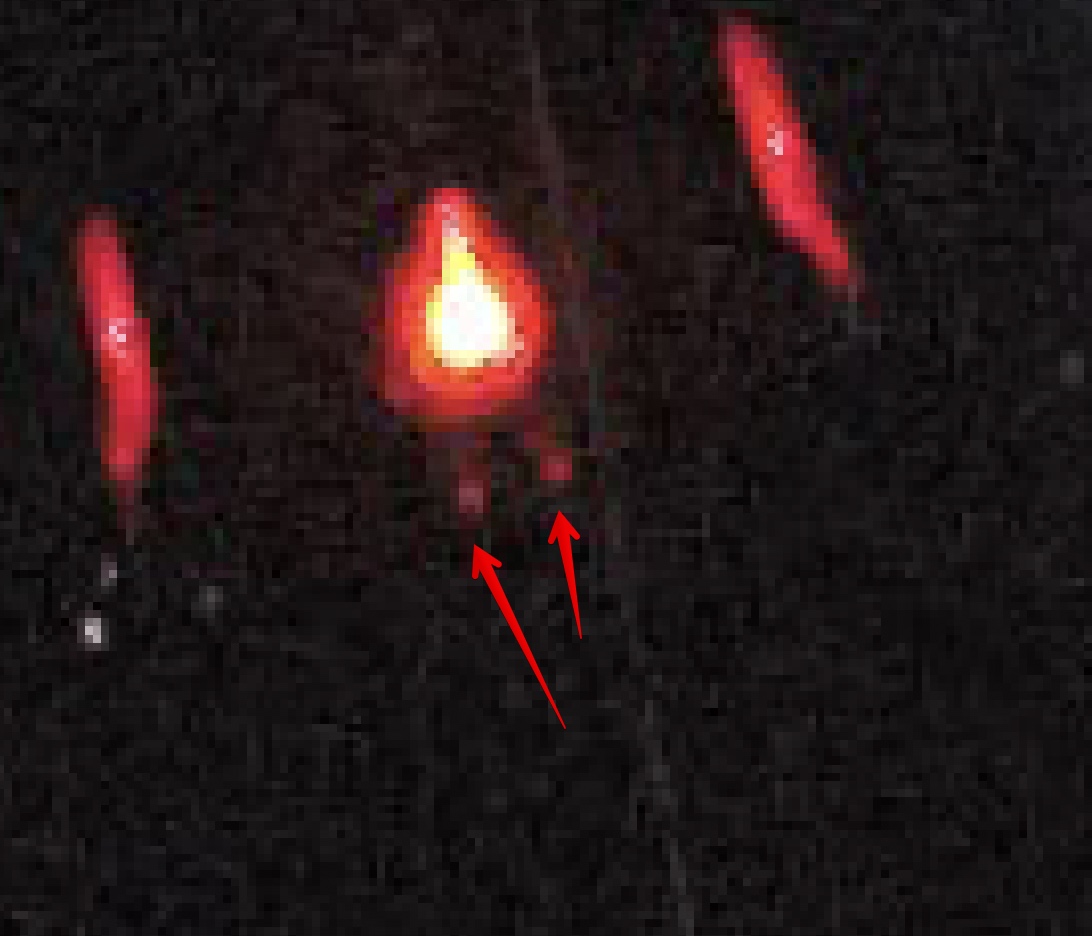 originally posted by: Blue Shift
Anybody got any other photos of airplanes captures in long night sky exposures to actually compare it to?

here you are from my camera 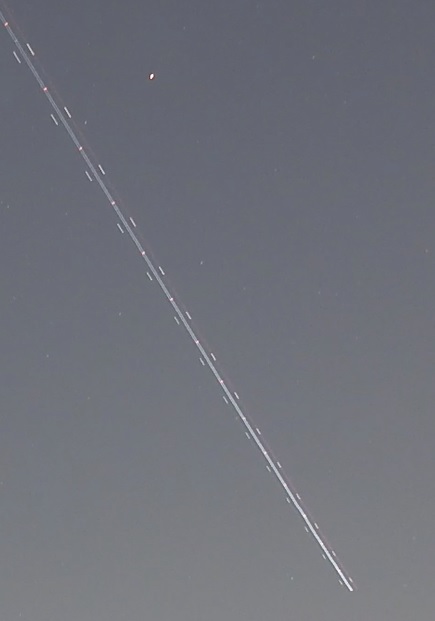 That is common when doing night sky photography, that would explain why it is not a dotted line as in my above link.
Some photographers that don't have a tracker to shoot long exposures will take maybe 10 or so images and combine them digitally afterwards. That gets rid of noise and makes the image look like one shot that is REALLY way better than one shot will do.

In other words only TWO shots of the plane were in it, the other shots had the plane but the lights were blinked off at that exact time.
edit on 17-5-2018 by recrisp because: (no reason given)

Just because the exposure is 3 minutes doesn't necessarily mean that the event unfolded over that 3 minute period. If an aircraft were crossing the imaging field at a rapid rate, it might take only a few seconds between the time it entered the image on one end, and exited on the other. Thus, it's possible that the camera may only capture 2 light strobes in the few seconds it took to cross the field.

In addition to the strobe reflecting off the inner engine nacelles you can also see the strobe lighting up the 2 air ducts that are positioned just behind the strobe. (See them with arrows on the "UFO" picture) 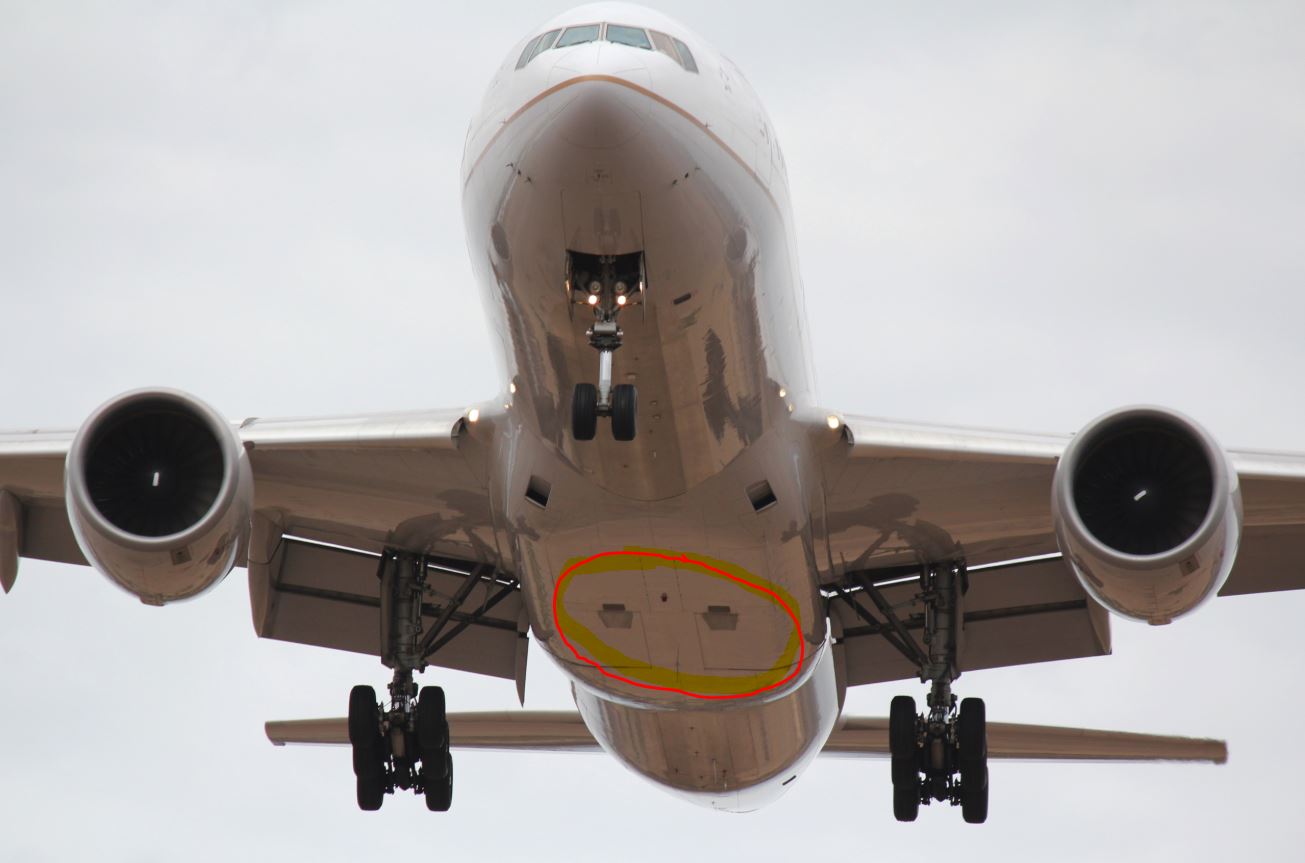 You can also see the air ducts being lit up in the still from the Boeing 777 landing video that I posted earlier.