posted on May, 11 2018 @ 12:28 PM
link
This is a really odd development. NY lawyer Peter J. Gleason, who made headlines in 2012 when he put up his own condo as collateral to secure bail for his client, Anna Gristina, the "Millionaire Madam" (aka "Manhattan Madam"), is claiming that two women contacted his office a year apart (in 2012 and in 2013) regarding allegations of assault by disgraced ex-NY AG Eric Schneiderman.

According to Gleason, given the circumstances, he did not recommend the women contact the Manhattan DA but instead, referred them to retired journalist Stephen Dunleavy, who's best known as a columnist for the NY Post and reporter for tabloid news show, A Current Affair. Gleason says Dunleavy contacted Donald Trump and that Michael Cohen later called him to discuss the women.

Attorney Peter Gleason wrote in a letter filed Friday that he was separately approached by two women in 2012 and 2013 who claimed that Schneiderman was "sexually inappropriate" with them.

"After the first consultation with one of Schneiderman's victims I explained to her how invariably the very entities that were established to protect her would ultimately turn on her to protect the power elite that includes Schneiderman," wrote Gleason, who misspelled the disgraced AG's name as "Scheiderman" and "Scheinderman."

After speaking with the second victim, Gleason wrote that he considered contacting Manhattan District Attorney Cy Vance Jr., but then decided against it.

Gleason told the Daily News he thought that was a great idea, because Trump was flirting with running for governor at the time.

"Had Trump become governor, there would have been a real ally in Albany for these women," Gleason said.

Gleason then received a call back from Cohen, Trump's personal attorney.

"During my communications with Mr. Cohen I shared with him certain details of Schneiderman's vile attacks on these two women," Gleason's filing says. "The extent of Mr. Cohen memorializing any of our communications is unknown."

It's not known if anything happened following these contacts but this article references a tweet from then private citizen Donald Trump (there's always a tweet) that's also making the rounds on Twitter: 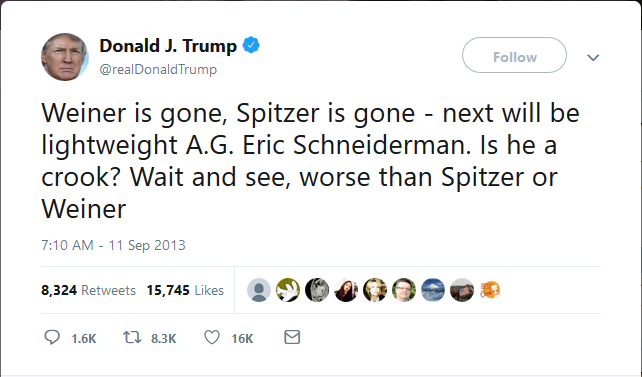 The obvious speculation is that Trump was letting Schneiderman know that he had dirt on him. It's unclear if the women in Gleason's letter are among the four who were sources for the Ronan Farrow article that triggered Schneiderman's prompt resignation. As this has been breaking, there's been some speculation of a hit job.

Farrow on Twitter, is saying that his contact with the women had nothing to do with Gleason or Trump:

Nope. None of our leads came via Trump people, and we had no knowledge of Gleason. No surprise there were other investigations—legit ones and political smears—as allegations were so widespread. But ours didn’t flow from any of that. Women in the story were all Dems, incidentally.

Not sure what your point here is...I actually read this twice trying to figure it out. Just posting as news or was there a purpose?

It’s imteresting that’s for sure.

I feel like this situation is another one of those “open secrets “ like with Weinstein, where have time around Schneiderman basically knew but said nothing


I'm amazed you (of all people) didn't see Trump's 2013 Tweet the same day Schneiderman abruptly resigned last week. It went viral on the internet and on Fox.

You'd clean out half of Congress and the Mainstream Media, if those breaking laws were fingered-investigated-indicted.

posted on May, 11 2018 @ 12:45 PM
link
He ‘knew’ but he didn’t ‘know’. Claiming that someone is abusive will get you sued for liable. I am sure there is tons of hearsay, but again, you can be sure someone did something but without proof, one cannot really say something. Where the truth stops and exaggerations begin

I agree, and good on him.

I think the meetoo movement sometimes goes off the rails

But if it helps protect people from the predators that use their position of power to attack people, I am all for it

Farrow seems to genuinely want to help these women and expose these cover ups, and I salute him for that
edit on 11-5-2018 by Grambler because: (no reason given)

posted on May, 11 2018 @ 12:46 PM
link
It's being suggested by many that the real reason for the raid on Cohen was Schneiderman attempting to cover his ass, and sieze/destroy whatever evidence Cohen may have been retaining from Schneiderman's assault victims.

Raiding a lawyer's files and violating attorney-client privilege is a serious thing, and normally would only be done for very serious reasons, and so far there has not been even a whisper of anything that would actually justify the raid. You might make a case for influence peddling, but that doesn't even come close to being a good enough reason for the way they treated Cohen.
edit on 11-5-2018 by AndyFromMichigan because: (no reason given)

Which would mean that MUELLER is in cahoots with SCHNEIDER.

Rosenstein signed off on the raid. Given what we know now, unless he can come up with a very, very good explanation, you can bet Rosenstein will either be fired or resign because of this.

File this one in the "So damn odd i don't know what to make of it, but it will probably make sense later" file. See if it grows any legs while it stews.

Rosenstein said 3 weeks ago that he "fully expects" to fired. Maybe he's willing to sacrifice himself to give the "Impeach Trump" haters more ammo.

He knows everyone he has dirt on everyone.. The left has never givin the man enough credit, always saying "hes a bufoon" or hes stupid.

They played right into his hands by underestimating him. They believed all the flat out lies and still do..

So much corruption is being exposed I am flabergasted..
edit on 11-5-2018 by notsure1 because: (no reason given)

Well if it's all as advertised, it doesn't seem like Schneiderman was greatly deterred in either going after Trump's interests or championing women speaking out against people like him.

He has known how bad it was corruption wise for years, and knew the only way to even try and fix it is become POTUS.

Like him or not this is fun to watch..

posted on May, 11 2018 @ 01:22 PM
link
Has anyone ever noticed how, no matter what the topic of a thread is, the diehards in my fan club would always rather talk about me?

I'm flattered, really, but I'm just a guy posting on the Internet!

I don't understand the point of your post, unless you are praising Trump for calling the scumbag out.