The Druze in Israel: History & Overview 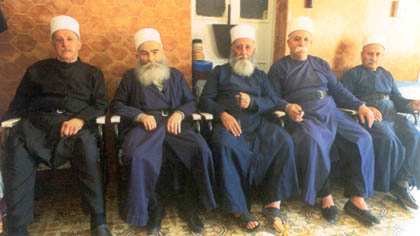 I just came across this secretive group and thought some may enjoy digging into the topic.
This seems to be a good account of what is actually known of them.
However much of their customs and way of life is unknown.

The claim is that they are desendents of Jethro, Moses' father-in-law.

The Druze community in Israel is officially recognized as a separate religious entity with its own courts (with jurisdiction in matters of personal status - marriage, divorce, maintenance and adoption) and spiritual leadership. Their culture is Arab and their language Arabic but they opted against mainstream Arab nationalism in 1948 and have since served (first as volunteers, later within the draft system) in the Israel Defense Forces and the Border Police.

Tenets and Precepts The Druze religion has no ceremonies or rituals, and no obligation to perform precepts in public. The main tenets that obligate all Druze, both uqqal and juhal, are: Speaking the truth (instead of prayer) Supporting your brethren (instead of charity) Abandoning the old creeds (instead of fasting) Purification from heresy (instead of pilgrimage) Accepting the unity of God Submitting to the will of God (instead of holy war)


Seems like a reasonable set of beliefs.
I highly encourage you to read the pages provided.

Some friends and I helped sponsor some Syrian Druze to escape the civil war in their country. I do not know much about their religion or customs—I never asked—but according to them they were persecuted by both sides in the war for mostly religious reasons.
This family in particular is very kind, not to mention self-sufficient. After a couple of years their two youngest are already fluent in English, their eldest is already working as a barber. The father works as truck driver, the mother looks after the home and children.

I know this anecdote doesn’t add to your thread about Israeli Druze, but it’s something.

I think they are usually regarded as an offshoot branch of Islam, well-established in the region. Around 1860, the Druse of Lebanon and the Maronite Christians of Lebanon were trying to massacre each other. I know that because I'm just reading through some old volumes of Punch, and came across several references to these troubles. I may be able to track one of them down again.


Maronites and martyrs
By way of squaring accounts with the Druse tribes, the Maronite bishops have united in demanding of the Turkish and French forces in Syria the slaughter of four thousand Druses, to balance the massacres which those other barbarians committed last summer on the Maronites. It appears, however, that the Druses slew the Maronites in self-defence, or at least under bodily fear, into which they had been thrown by a pastoral of the Right Reverend Sephronius, Bishop of Tyre and Sidon, inviting his flock, on a day appointed, to rise upon the Druses, and, with a view to plundering their property, to slay them. To enforce this exhortation, the Bishop chiefly insisted on the argument that the Druses were a race neither warlike nor numerous,and therefore might be robbed and murdered with great facility.