67 Years Ago Today Julius and Ethel Rosenberg Convicted of Espionage.

posted on Mar, 29 2018 @ 05:41 PM
link
www.history.com...
On March 29, 1951, after a brief 23 day trial, a jury found Julius and Ethel Rosenberg guilty of Conspiracy to Commit Espionage against the United States of America. Mr. and Mrs. Rosenberg had been accused of heading a spy network that supplied the Soviet Union with crucial information leading to its development of atomic weaponry. 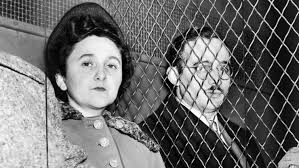 Julius and Ethel Rosenberg after conviction.

(thumbnail, click for larger size)
The Rosenbergs embrace after arrest.

Two days after the conviction, the husband and wife were sentenced to death, and their executions were carried out in Sing Sing on June 19, 1953.

One of the main factors leading to the Rosenberg’s conviction-- particularly Ethel’s-- was the testimony of Ethel's brother and sister-in-law: David and Ruth Greenglass, who had themselves been accused of supplying the Soviets with notes David stole when working on the Manhattan Project at Los Alamos.


The Rosenbergs were not helped by a defense that many at the time, and since, have labeled incompetent. More harmful, however, was the testimony of Greenglass and Gold. Greenglass declared that Julius Rosenberg had set up a meeting during which Greenglass passed the plans for the atomic bomb to Gold. Gold supported Greenglass’s accusation and admitted that he then passed the plans along to a Soviet agent. 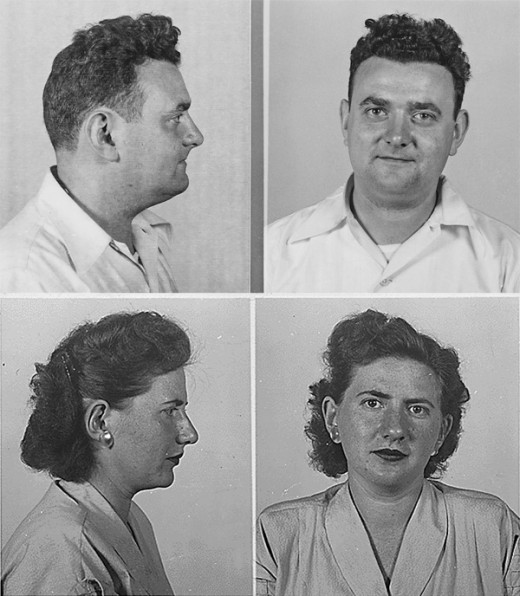 The investigations began with the apprehension of Klaus Fuchs, a German physicist who had worked in Los Alamos on the development of nuclear weapons and who later passed the information on to the Soviets through German communist Ruth Kuczynski. Fuchs gave authorities information on his courier Harry Gold, who in turn named David Greenglass.

Greenglass pointed his finger at his brother-in-law Julius Rosenberg, claiming Rosenberg headed a spy ring and recruited him when he heard of his position at Los Alamos.


Before the grand jury, neither Greenglass mentioned:
the allegedly crucial September 1945 meeting
the supposed atomic bomb sketch that they later said David gave to Julius at that meeting
any hand-written notes from David, about the sketch or bomb
Ethel Rosenberg doing any typing of these supposed notes
or Ethel’s presence at the alleged meeting.


www.rfc.org...
For the above reasons and others mentioned in the linked article, there have been many calls over the years for Ethel's posthumous exoneration.


Mr. Greenglass changed his name after serving 10 out of his 15 year sentence (Ruth received no time in exchange for her testimony) and went into hiding. The New York Times tracked him down a few years ago for an interview which informed a book on the subject in which Greenglass all but admits to lying to protect his wife:
www.nytimes.com...


“I don’t remember that at all,” Mr. Greenglass said. “I frankly think my wife did the typing, but I don’t remember.” He said he had no regrets. “My wife is more important to me than my sister. Or my mother or my father, O.K.? And she was the mother of my children.”

Despite mounting evidence of Ethel's innocence, her name has yet to be exonerated.
www.cbsnews.com...
edit on 29-3-2018 by zosimov because: (no reason given)

As we haven't yet had all out nuke war, hard to say. Since the U.S. has degenerated (?) into a state that topples legit regimes, wages global hegemonic wars, tortures, has surveillance for all and might be complicit in hiding secrets about science and history not related to military security, maybe being the only nuke power wouldn't have been a good thing.

And yeah, Ethyl might be completely innocent... but .. .complex.

Excellent post, Baddogma, and I agree that there is no bottom to the complexity of this case. The more I read up on it, the less confident I was that I was seeing a full picture.

A few things that stood out to me in this case:
*death conviction on little to no evidence. Even the prosecutor said of Ethel "She called my bluff," when asked about using her to draw out a conviction for her husband.
*The Soviets were "allies" at the time of this supposed meeting.
*Greenglass (how is THAT for the name of a person working near the development of the atomic bomb? Check out this link to Trininite- the "green glass" material that formed where the Trinity Bomb was detonated) en.wikipedia.org...
changed his story to implicate his sister AFTER his wife's testimony that it was
Ethel at the meeting typing the notes.
*The fascinating layers of betrayal here- betrayal of country, family, self.
*The horrific and barbaric nature of state-sanctioned homocide. Ethel's execution did not go as smoothly as her husband's. It's horrific and about time to re-examine our justice system.
*The fact that it was an ATOMIC WEAPON that the State was secretly gaurding and hoarding for itself, as if the existence of such a monstrosity could be justified. (As you so acutely mentioned).
*Also, maybe most importantly... what is a German Communist doing working on developing an atomic bomb for the UK?
VERY BAD oversight that came back to bite us when he betrayed "the allies" for the Communist cause.
Klaus Fuchs was the first apprehended in this "atomic spy ring."
www.atomicheritage.org...

But your commentary about the nature of the US government just adds another, almost inpenetrable layer to the complexity.

Thank you for reading and for the insight.

This is good stuff. I've heard developments along this line that the trial was a sham. I need to look more into it to make a decision though. S&F nonetheless.

Very fascinating, no matter how one looks at it.

I found the first link I posted (history.com) to be heavily biased in the Rosenberg's favor, and that more objective sources suggested that Julius did pass information on, but most likely it was military/industrial rather than atomic related.

Agreed, and thanks... but this issue deserves better than a hurried response , but apologies, again, as my time always seems short.

As to the utter barbarity of state sanctioned murder (etc, like doomsday weapons) , most of my concerns (in most issues) comes down to the nature(s) of the state(s) we let rule us and the less than wholesome natures of the usual personalities seeking power.

But this issue really acts as a general, easier to grok representation (metaphor) for geopolitics in our lifetimes. Life, or death in defense of various ideologies? Good thread, Zos.