The October 1991 issue of a russian equavalent of Popular Mechanics has this beautiful cover art. 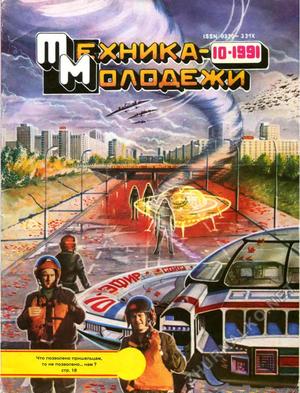 The corresponding article is supposedly written by a postgrad (candidate of engineering sciences). It describes his own take on UFOs and interstellar travel. He dismisses Einsteins work by being based on postulates and claims to have developed and published a theory of Aetherdynamics which is the real deal.

He proposes that his aether can be an unlimited source of energy making interstellar travel a real possibility. The energy is supposed to come from aether vortices, using tornados as an analogy. He claims that ball lighting is a form of aether vortices (and a way to extract energy out of it?).

As a further step he proposes to use aether vortices directly for propulsion, describing what looks like an aether ramjet with an inlet creating aether vortices and a combustion/annihilation chamber where counter-rotating vortices react explosively. The exploding aether propels the spacecraft by passing through it, dragging it along, and reaching FTL speeds. Unfortunately there is no mention about how the vortices are created and channeled and why they would react so violently.

He suggests that the aether craft could be saucer shaped. Even though there is really no technical reason for it to be. But it certainly makes for a really beautiful cover picture.

posted on Mar, 1 2018 @ 03:44 AM
link
He is chatting nonsense. There is no interstellar traval. There is no such a thing untill that silly movie being released. Now everyone using that words..

Ps.. i think, Best way to get unlimited energy is rubbing two cats.
edit on 1-3-2018 by Pandaram because: (no reason given)

originally posted by: Pandaram
He is chatting nonsense. There is no interstellar traval. There is no such a thing untill that silly movie being released. Now everyone using that words..

Ps.. i think, Best way to get unlimited energy is rubbing two cats.

If you say so then it must be true.

Even if classical aether did exist, in the definition of a medium for electromagnetic waves, what makes him think that this medium will enable crafts to reach FTL speeds?

Zero point energy is confirmed to exist, and even that can't do the trick.

It'd be like wiring a lightbulb's lead to a positive, and wire its ground to yet another positive. You'd get no net current.

When you pressurise and vortex mercury it creates a superconducting plasma and a very highly charged electromagnetic field called a Magnetic Field Disruptor, this would create an EM vortex around the craft reducing the mass.

posted on Mar, 1 2018 @ 06:23 AM
link
I went ahead and translated the article (Are interstellar flights possible from Tehnika Molodeji) in google translate and added an additional paper from the same author in which he describes in more depth his theory. (Where does the ether wind blow).

Are interstellar flights possible.pdf
Where does the ether wind blow.pdf

Why would it reduce the mass?

The mass of light might be zero, but the mass of the device emitting the EM does not diminish. In fact, it by definition loses exactly zero mass.

originally posted by: swanne
a reply to: moebius
What makes him think that this medium will enable crafts to reach FTL speeds?


If your speed is constrained by the medium, then by manipulating it you might go faster than the speed within the medium.
e.g. change its density.

OP do you have a link?

see my post, I added the original article in the pdf files

This appears to be using pre Michelson Morley physics before they discovered that times square in the mass equation.
The clocks in that experiment were about as accurate as something out of the pit and the pendulum but it was enough to verify the basic equation.
The cover illustration looks like a redundantly lit sewer aquaduct suffering from red shift?
I've sworn off coffee or i'd have more interest in reverse engineering the craft, You?

If your speed is constrained by the medium, then by manipulating it you might go faster than the speed within the medium.


Yes, of the medium. But of light?

Huh?! I wasn't aware of this statement from Laplace?

Though today we know that gravity travels at the speed of light, it's still historically very interesting.

His aether idea is just built on foundations from ideas that more or less started up when philosophers started to look at logic in a mathematical way.

Your positive-positive no net charge idea is a notion of behavior within observable space-time.

Depending on which side of the fence you sit on, when it comes to Bell's Theorem is an easier way to credit or discredit these types of ideas.

His aether matches Tegmark-esque descriptions of approximations of energy and forces in n+1 dimensions that can't be directly predicted from n dimensions.

Ultimately, research into the behavior of gravity, has led many current physicists and researchers to explore the possibility that this type of idea is at the source of gravity's one directional movement in space-time.

(One directional in space-time, being that gravity starts it's life as an attractive force, and remains so, throughout space-time. We do not have direct evidence of gravity acting as a repelling force, and if it does... We definitely can't observe that directly as of right now.)

In a convoluted way, that kid was just suggesting direct gravity manipulation, with no mechanism to actually change gravitational fields.

If Einstein HAD actually finished UFT then this kid's "aether" would be something we were already using.

Really, gravity, time travel, etc... one way or another it all ends up with the question - Can we get out of n dimensions? Can we leave space-time somehow? Can we bend light speed? Can we ____ ?

We've been trying with modern technology for decades... If we can do any of that stuff... Well... For the most part, I sure don't know about it.

Equal and opposite reactions applies within our observable system... Who knows how stuff acts in between dimensional change overs...

posted on Mar, 2 2018 @ 04:01 AM
link
So many interesting stuff 'over there'. FTL is impossible. but changing a constant ? well why exactly is it a constant ? I mean light. Why 299729.458 ? Declare something a constant and stop thinking.
Constants are the Gods of the pantheon of science.lol be warned Russia is teleporting monkeys into space right now. So if it starts raining monkeys blame the Russian's

originally posted by: moebius
a reply to: swanne

It has been shown that while sailing and tacking into the wind, small vortices are generated along the trailing edges of the sail. I am not technically adept enough to know exactly how they impact the motion of a ship, but I have always thought it interesting. This may, or may not, have a corresponding relationship with drawing energy from a medium while passing through it.