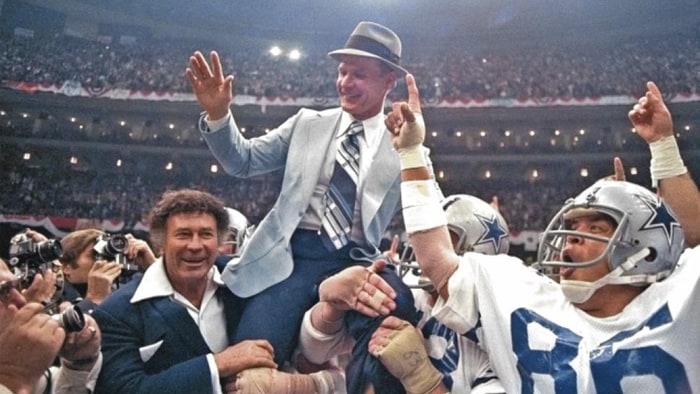 They call him the Godfather of the gatecrash. Not only has he snuck in to the big game, he has gotten into Play Boy Mansion parties, the Academy Awards, the Olympics, medal of honor recipient parties and on the list goes. He has taken photos with Tiger Woods, Bill Clinton, and Nicholas Cage.

Here he is with Vince Lombardi after Super Bowl I. 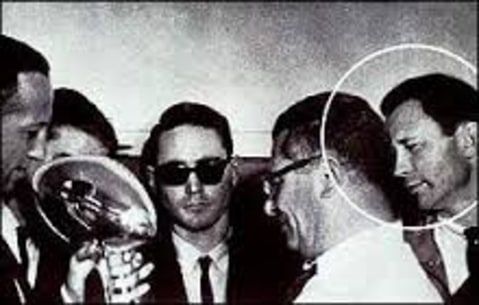 "Never, ever in my life, did I think I would be a famous gatecrasher," Rich says from his home in the San Diego area. "When I was on the podium after Super Bowl I with Pete Rozelle, Vince Lombardi and Bart Starr, I had no idea I would become famous. I just wanted to get my picture taken."

He owned a bar in which players and owners from the San Diego Chargers would frequent. He began by riding to games with them to get in for free. Before long he learned how everything worked and began sneaking into big games.

"I got to know a lot of the Kansas City players real well," Rich recalls. "So when they made the first World Championship Game and I found out where they were staying in L.A., I got up early, found where the buses were going to park and got there just ahead of them. When they got off the bus, I brought a jacket a Chiefs player had already given me and walked off the bus with them and into the locker room."

He spent the first half on the Chiefs' sideline, evaluating which side to finish the game on. Since he was already in, Rich's goal was to get on television. Once the Green Bay Packers put up 21 unanswered points in the second half, Rich ditched the Chiefs jacket and stealthily shifted to the winning locker room to ride the victory wave.

Rozelle, the NFL's commissioner, was on a small podium in front of TV cameras, waiting to award the championship trophy to Vince Lombardi and quarterback Bart Starr. But Starr stepped off the stage for another interview and Rich saw his opening – he boldly stepped right up behind Lombardi and the legend of the gatecrasher began.

He became so well known that the NFL began to put out wanted posters for him. 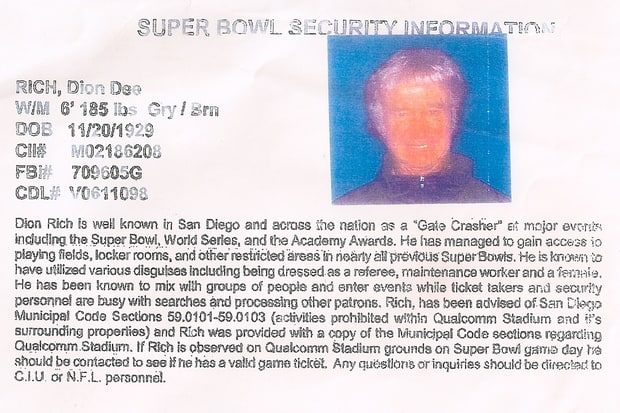 He donned wigs, glasses, fake mustaches and beards. He collected old press passes from previous Super Bowls and flashed them at guards. He wore jackets that were the same color as event security and put an earpiece in. Even affixed name tags to a blazer and claimed to be with the NFL. As the years passed and the security increased, Rich raised the stakes.

The NFL spent thousands a year trying to keep track of him, they hired PI's to find and learn how he kept not only sneaking in, but getting on the field for the post game celebration.

A truley interesting man, check out the full article for more tales from his gate crashing days.

I hope everyone enjoys the Super Bowl today!

Dion has arrived in Minneapolis... watch
Out Superbowl!!!

Yeah.. how much are those tickets?


Now will he make it in this year?

posted on Feb, 5 2018 @ 04:08 AM
link
Great post. What a legend. He deserves a Superbowel ring and a certificate from the NFL for his dedication. I would love to hear if he made it in this year. Would be a great comedy movie.

posted on Feb, 5 2018 @ 06:45 AM
link
I checked the link to his facebook...hoping, just hoping to god there would be a picture of him at the superbowl last night.
Perhaps hes still partying with the team and the pics will be uploaded at some point today hahah
What a fricken legend!
And the balls on him, knowing every security guard has a picture of his face and are keeping an eye out for him.
LOL I love it!