But the real story was not the modest slowdown in December optimism, but the monthly data in 2017: "2017 was the most remarkable year in the 45-year history of the NFIB Optimism Index,” said NFIB President and CEO Juanita Duggan. “With a massive tax cut this year, accompanied by significant regulatory relief, we expect very strong growth, millions more jobs, and higher pay for Americans.”

The Optimism Index for last month came in at 104.9, slightly lower than the near-record November report but still a historically exceptional performance. That makes 2017 the strongest year ever in the history of the survey. The average monthly Index for 2017 was 104.8. The previous record was 104.6, set in 2004.

"We’ve been doing this research for nearly half a century, longer than anyone else, and I’ve never seen anything like 2017,” said NFIB Chief Economist Bill Dunkelberg. “The 2016 election was like a dam breaking. Small business owners were waiting for better policies from Washington, suddenly they got them, and the engine of the economy roared back to life."

"There’s a critical shortage of qualified workers and it’s becoming a real cost driver for small businesses,” said Dunkelberg. “They are raising compensation for workers in order to attract and keep good employees, but that’s a positive indicator for the overall economy."

Driving record optimism in 2017 was the expectation of better economic policies from Washington. Suspending the regulatory assault on business and now a massive tax cut answered two of the three top concerns for small business owners, according to NFIB research.

“The lesson of 2017 is that better policies make for better economic results,” said Duggan. “The evidence is overwhelming that small business owners pay close attention to Washington, and that federal policies affect their decisions on whether to hire, whether to invest, whether to grow inventory, and whether to seek capital.”

I think this is good news regardless of people political affiliation.

Small business and middle class strength is crucial to the economic health of the country, and seeing small business optimism at record levels is a good sign.

Regardless of many peoples apparent dislike of Trump, it seems his message of deregulation and tax cuts is resonating with small businesses.

Hopefully this confidence will lead to increased investment and job creation from small businesses, and help even more people achieve economic success.

I just visited with my cpa, if he is correct I will be loosing money. My taxes will be going up..

Our income as a family is over 100k and under 250k. Those two brackets 110k and 250 k + may be getting a rude awakening. Particularly s corpd and start ups regarding deductions and exemptions.

The charitable and nonprofit sector may also see a large decline. Which could do things like increase medical and college expenses.

posted on Jan, 9 2018 @ 10:00 AM
link
I'm not optimistic; I'm calling fake news..... I just sold my LLCs to my employees and wished them luck. I don't trust anything coming out of this WH! They don't have a good record of telling the truth.

And when did trickle down ever help small business or the American working man?
edit on 9-1-2018 by olaru12 because: (no reason given)

I was actually shocked by my meeting with the cpa. I assumed a nominal tax break but an increase I did not..

Now he said he is still working through the changes but was himself a bit taken back. He literally has a trump sticker on his car.

This is not because of who is in the White House.

This is because i am one Bad A** Mfer in business.

We'll see this year if it is real or contrived.

I'm hoping it's real and that people are doing better and keeping more of their money.

Then again, I always want that.

The Great Hollowing Out Of The Middle Class: New Business Formation Collapses

For a country that prides itself (or used to at least) on the success of the entrepreneur and small business creation, a disturbing trend has developed. According to according to a new analysis by the Economic Innovation Group, fewer new businesses were created in the last five years than any other period since at least 1980.

Way to stay half full. I hope you are right..I have a feeling though s corps are screwed. Particularly if the owners dont have children to benefit from the child tax credit increase.

Most news is fake and made up.

I stopped paying attention to any of it.

You need to keep your head down and working like a bat out of hell to be successful. Donald Trump could have a heart attack tomorrow and it would not phase me one bit. Keep working, focus on your mission, and you will be fine.

That is the truth.

Hah, this is my mission 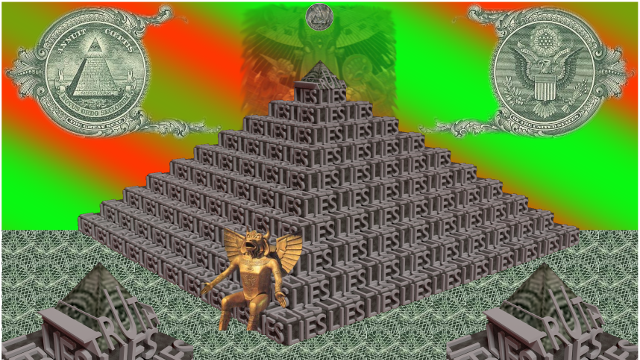 I have run the numbers and I have represented them graphically, the truth is I get no profit from this even though I capped the damn pyramid, something they could not do. So now they can leave me alone.

edit on 9-1-2018 by SkeptiSchism because: added justification for capping their lies