Sad news but inevitable given his illness I feel , he left his mark as a founder member of one of the worlds biggest and most well known rock bands , he now lives with the legends of rock.


We salute you Malcom.

The legacy he has left for future generations is priceless, today is a sad day for family, band members and rock fans around the world. 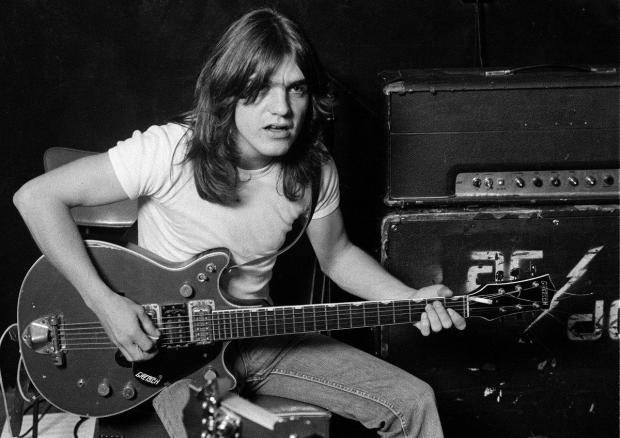 Reading about it hurts my Rock & Roll heart. Feels like loosing bricks on my lego body.

He will be greatly missed by rock and roll fans the world over.

But he will be missed by his brother more, and indeed by his family. It is toward them, that I direct my consideration at this time.

For the rest of us, I hope that we remember to celebrate the fact that the man lived at all, and the great things he bought about and had a hand in, that he lived at all, rather more than we are crushed by his absence from the world.

As a guitarist, there have been very few hard rock rhythm guitar players that have influenced my style as much as Malcolm. In a lot of cases rhythm players don't get the respect that they deserve by people who have not actually played in a band. That's not the case with Malcolm. I don't know anybody, whether they are a player or fan, that didn't respect him.

I first heard those guys play when I found a bootleg vinyl pressing (anybody remember those?) in a mom and pop record store in Clanton, Alabama in the late 70s, before Bon passed away. I was just starting to play in bands at the time, and would let the turntable cycle over and over while I was learning all the guitar parts. I bought my first ratty-as-hell JTM45 because of that record!

I still have that album, and It has influenced my playing style to this day.

My heartfelt condolences to Angus, his family, and all the fans, especially so soon after losing George.

We're all gonna miss you, brother.

posted on Nov, 18 2017 @ 11:46 AM
link
woke up to this sad news.....
in my eyes AC/DC was one of THE great rock bands ever!
they also helped other bands get going as well, anyone remember
Angel City? another powerhouse aussie band.
see you on the other side

Horrible end for a problem child!

One of the best guitarists period. He and his brother provided a bedrock for so many memorable songs. No jumping around needed. Just solid playing. Really good stuff too! I love his sound!

Thanks for the great music!

posted on Nov, 18 2017 @ 12:59 PM
link
AC/DC was my first journey into hard rock, it changed who I was. Absolutely loved them, great music from my childhood. RIP Malcom, rock on into the great unknown!!

posted on Nov, 18 2017 @ 02:12 PM
link
Yep, an other father figure bites the dust... I am at an age that I will sadly will see my heroes go one by one. Unless there will be a breakthrough with age-stopping.

He rocked my world from age 12 to now. I hear AC/DC and get flashbacks to many many watershed moments in life. Whole Lotta Rosie was playing the first time I went south with a girlfriend. AC/DC
and cigarettes and gum's all I remember.

posted on Nov, 18 2017 @ 03:22 PM
link
What a sad loss. Personally I feel so bad for Angus, considering he lost his other older brother Steve Young a few weeks back also. Steve was the brother that filled in for Malcolm on the recent AC/DC tour with Axel Rose as the front man.

This is a very sad day for me also considering AC/DC was one of my top 3 all time favorite bands.

R.I.P Malcolm, Bon and Steve. You are all truly missed.

posted on Nov, 18 2017 @ 03:46 PM
link
So saddened to hear this. They were part of my childhood and some of my best times were seeing the band in concert. RIP Malcolm.


😢 losing a lot of great ones this year! Saw him in concert 8 rows from the stage, my friend couldn’t hear for two days. They were great live.

Celebrate the amazing life this guy had because few
are so lucky.

Just to clear some things up.

Their older brother George Young (RIP) died at 72yo a few weeks ago.

George was the rhythm guitarist for The Easybeats, who were a Very Popular Oz Band from the mid 60s to early 70s.

You all know their music.

After The Easybeats split, George young and fellow member Harry Vanda, continued song writing, and had many hits for themselves and others from 1970 on.
They also collaborated with the Albert Bros, who were setting up a record label and studio.
At one stage the Alberts were looking for a session guitarist, and George naturally suggested his young brothers, who could both play guitars, and they went on to be session guitarists for Alberts for years.

They formed a band around 73ish and played pubs.

They were in my city on tour and one Bonn Scott was in the audience, he also lived in my city at the time and was a lead singer for a Hippy outfit called The Fraternity, who had some minor hits.

The Then AC/DC singer was a bit crap, and the boys asked Bonn if he'd like to do a few numbers, so he jumped on the stage .....and the rest is history....Pub rock boomed...

Here is a bit of history for you AC/DC fans.