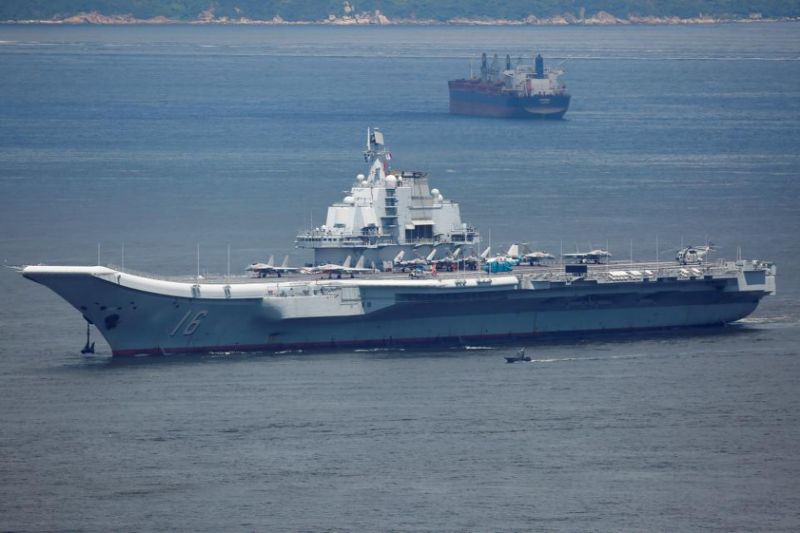 Now they are finalizing the design and preparing to build their 3rd aircraft carrier, the Type 002. But the new class of carrier will be using a new jet launch system that doesn't require the "ski jump" at the end of the runway.

China will now be able to move ahead with its third aircraft carrier, after it announced a breakthrough on technology for launching aircraft.

The new technology would be the most advanced jet launch system in the world that doesn’t use nuclear power, China's military said. The new developments on its integrated propulsion system would create more power for an electromagnetic catapult. Aircraft would be launched more quickly and in less time than the alternatives, steam-catapult and ski-jump systems. The country’s two prior carriers, the Liaoning and the Type 001A, are ski-jump launch systems, a technology designed by Russia.

The Integrated Propulsion System (IPS) is an electro-magnetic launch system that can be used on a conventionally powered ship. Previous Electromagnetic Launch Systems (EMALS) required more power than was available from conventional power generation.


The solution was provided by a team led by China’s top naval engineer Rear Admiral Ma Weiming, which developed a medium-voltage, direct-current transmission network to replace an earlier system based on alternating current.

“It wasn’t just a simple switch from alternating to direct current, but a complete overhaul of the energy supply and distribution system – from steam boilers to the energy storage device,” he said.

Wang added that in the future, the same technology could be used to launch not just aircraft, but also missiles and satellites, and maybe even power high-speed trains.

He added that the US used an integrated propulsion system on its first USS Zumwalt-class destroyer, which was launched in 2013, but that it was not as advanced as the second-generation technology developed by Ma and his team.

An article in the Diplomat:


The new IPS would reportedly allow the Type 002 to be armed with high-energy consuming laser weapon systems and electromagnetic guns.

The Chinese military makes this sound like the best thing since sliced bread. I'm curious what the ATS experts have to say about this development.

They must have bought it from ACME

The glaringly obvious issue I can see regarding this EMALS system is motor replacement. Motors used for the current standard steam propulsion are common and easily interchangeable. From the sounds of the EMALS motor, it will be a custom built motor each time, there won't be a stock of them to go to if/when one fails.

posted on Nov, 18 2017 @ 01:18 AM
link
I say we keep marching around like a goosestepping global imperialist tyrant until we successfully troll them into doing the same so forever we can keep justifying our own primitive BS.


No...and you shouldn't either. But not too long ago, one couldn't envision China with top-quality anything.

No...and you shouldn't either. But not too long ago, one couldn't envision China with top-quality anything.


Right, ask yourself where and how did you come to that conclusion?

Did you form that opinion through media and imported crap or did you go to the source and make an informed decision?

A rail gun for jets.


Have you seen the rifles they carry in parades?
Yeah, it's the same crap. Norinco.

So, they use our work with rail guns and our own electromagnetic launch system to come up with their own. How typically chinese.

Now now...we all know they are Chicago Electric brand "High Super Quality safety orange with extra voltage multi-speed variable switch!!!!" from Harbor Freight, they offer an extended warranty for an extra $3.99, just bring it back to the store, wipe the cosmoline off and they are good to go!!!!

hmm just wonder were the usa has stolen there advanced tech from....
starting with defected nazi's for the atombomb
operation paperclip after ww2
sidewinder infrared guiding tech from an inventor out of switserland
ect ect.....
edit on 18-11-2017 by ressiv because: (no reason given)

Chinese military chief claims breakthrough in electromagnetic launch system for aircraft carrier, and will be utilize such system in the third aircraft carrier that China will be build after Type 001A. The launch system is conventionally powered through capacitance thus eliminate the need on nuclear reactor for power supply.

Apart from the fact this is a poorly written sentence and likely chucked into a Chinese-English translator. It's gobbledegook.

It'll be years before China can effectively use a carrier. Just building one doesn't give them the knowledge and capability to use them effectively.
edit on 5/11/2018 by Zaphod58 because: (no reason given)

Well, my OP was based more on Chinese PR than reality. The Liaoning carrier that they rolled out recently for some of their very public military training exercises is just a training vessel. It is quite limited in what it is able to do, and would likely not pose much of a threat to air superiority. It might serve as one hell of a troupe transport though.


I also have my doubts about the real level of functionality of some of the technologies they claim to be deploying. I don't doubt that they can eventually make it work and install it on some of their vessels. I also don't believe that it will necessarily be any less reliable or more poorly constructed than systems built in the West. But they ain't there yet.

And, I think, this PR is mostly aimed at the Chinese people. It gives them a sense of pride to know that their nation is a major player on the world stage. Thus they have less desire to throw out their communist overlords.

Considering that the CATOBAR hull won't be ready until probably 2023, they've got time to work it out. Don't underestimate the Chinese. They don't have the greatest materials science, but they find other ways around issues.