I'm relieved don't go without it , everthing will be just fine .
We will enjoy the view..

Wait until they put that thing on..
My guess is that they are also going to test some kind of electromagnetic shielding to implementing a plasma-based deflector shield is that a magnet powerful enough to hold a bubble of super-hot plasma in place around the craft ?


originally posted by: charlyv
With all of the spectroscopy and infra-red/ultra-violet analysis we do on the corona from both Earth and spacecraft, what are the real new innovations that could be had to visit it? All for the science, but at $1.5b, would there be more important endeavors that would have a higher bang per buck?

I can understand this side of the conversation. Even more puzzling is that it is likely they will have ran many many virtual tests and scenarios and will be simply "confirming" the majority of data they theorize to find.

But, that's science. Ultimately, I think the engineering to get there is more exciting than the science.

It may also be just another way to funnel taxpayer money into people's pockets. Does it really have to cost $1.5 billion?

I think that also would be one of the questions they want solve by measuring the sun's gravitational forces .

And maybe , as I hope they will do what the relationship between plasmas and gravity will be?

Anyway doesn't mass play a role on the gravitational forces related to the spacecraft itself?

The craft itself would have to stay out of the ejections and gravity to stay alive I guess ?

I only could think of that if that square piece of four inch metal plating would be the only thing that has put the craft out of harms way then I will cross my fingers ?

So 1.5 billion are the costs of operation? One would think there's some piece of highly sophisticated technology onboard of that craft wouldn't it?

Rocks are not popular amongst ATS members, I know I've posted quite a lot of those things at the end it still was a rock that caused peirodolic insomnia among those that didn't want to be infected by something not from this world.

originally posted by: MarioOnTheFly
It's not just aluminum foil...there was scotch tape as well


They should just go at night when it's not as hot.


originally posted by: MarioOnTheFly
It's not just aluminum foil...there was scotch tape as well


They should just go at night when it's not as hot.

posted on Sep, 28 2017 @ 01:08 PM
link
I have to say that this should have been called the Icarus Probe, but oh no, they called it the Parker Solar Probe proving NASA don't have a sense of humour.

It'll be amazing, if not a bit hot.

posted on Sep, 29 2017 @ 03:23 AM
link
If they are only using Venus for gravity assist trajectory adjustments, then the final orbit will be an eccentric ellipse that takes the probe very close to the Sun at perihelion, but it will coast out to Venus orbit at aphelion. In other words, they will not be roasting the probe 100% of the time. The shielding and thermal protection only has to be good enough for the probe to survive multiple relatively brief passes through the solar corona. Most of the orbit will be a (relatively) comfortable distance from the Sun.
edit on 29-9-2017 by Mogget because: (no reason given)

originally posted by: midnightstar
No way wont last 5 mints at 2500 F
Really Russians got photos of Venus ground the ship lasted less then a few mints and its only 850-900 % F there .
You relize no ones ever post the strange rock in the Russian Venus photos ?

The harsh environment of Venus was NOT due just to the temperatures.

And then there is the corrosive compounds in the atmosphere, such as sulfuric acid.

Those are the main reasons the Russian Venera probes didn't last long. Sure, temperature was a factor, but the bigger factors were the high pressure and corrosive conditions.

On top of that, the temperate that the sun probe would need to protect itself against would only be coming from one direction (the direction of the Sun). Therefore the entire probe does not need to be able to withstand the high temps, but only the shield in front of it does.

If the rest of the probe remains "in the shade" behind the shield, there should not be enough hot particles of matter interacting with the shaded parts of the probe to be a problem.

posted on Sep, 29 2017 @ 09:50 AM
link
They just need an unobtanium shell and liquid nitrogen cooling and a relay system for transmitting through the interference.

originally posted by: anotherside
They just need an unobtanium shell and liquid nitrogen cooling and a relay system for transmitting through the interference.


They don't need a shell, but just a shield. There are known materials that can withstand the heat.

Plus, it does not need to transmit data during the time it is closest to the Sun; maybe it will only transmit during the part of its orbit that is farther out from the Sun.

posted on Sep, 29 2017 @ 10:02 AM
link
All great points ((( Soylent Green Is People )))
Really great as a matter of fact as even without the heat the craft would not have lasted long .
and I thank you for pointing that out as It was a blind spot .
having said that the heat along would have pulled it off as well .
that is the problem the sun one faces being in 2500 % for hours let along mints the shielding may not transfer heat well but we are not talking about spot heat and not saying it will be mints .
wile the shielding may not melt gold and other rare metals will .
Humm maybe I am missing a beat a liquid nitrogen cooling system would do the trick .
Kinda like the paper cup trick fill a paper cup with water put it in a fire and the cup cant burn as the water keeps teh temp lower then burn temp .
Bet 100 $ the craft has one super sized cooling system .

originally posted by: seasonal
One thing they will try to solve is why the corona is hotter than the surface of the sun.

The "Sun" is a pulsing waveform modulator, taking info from Eden and converting it into the fake. They will probably call the pulses "microflares" or something. 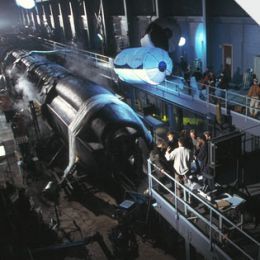 originally posted by: 0bserver1
a reply to: combatmaster

Wait until they put that thing on..
My guess is that they are also going to test some kind of electromagnetic shielding to implementing a plasma-based deflector shield is that a magnet powerful enough to hold a bubble of super-hot plasma in place around the craft ?

But the cook never tells the ingredients of the meal I guess. .


Now thats what im talking about..... some real tech, not a bloody garage toolbox innovation.