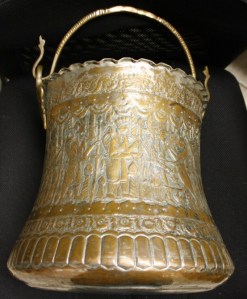 The above image was downloaded from an auction house, it was listed as an Ancient Anunnaki Water bucket. It disappeared almost as soon as it was downloaded and Ive never found another pic like it. Its interesting because if it is a "purse or bucket" as shown in the ancient reliefs, then its noteworthy that it is made of two metals. I am not skilled in electrical knowledge, but it would seem to me that if an acidic liquid was added, it could produce an electric charge somewhat like the Bagdad Battery. Im hoping someone with this knowledge can enlighten me. 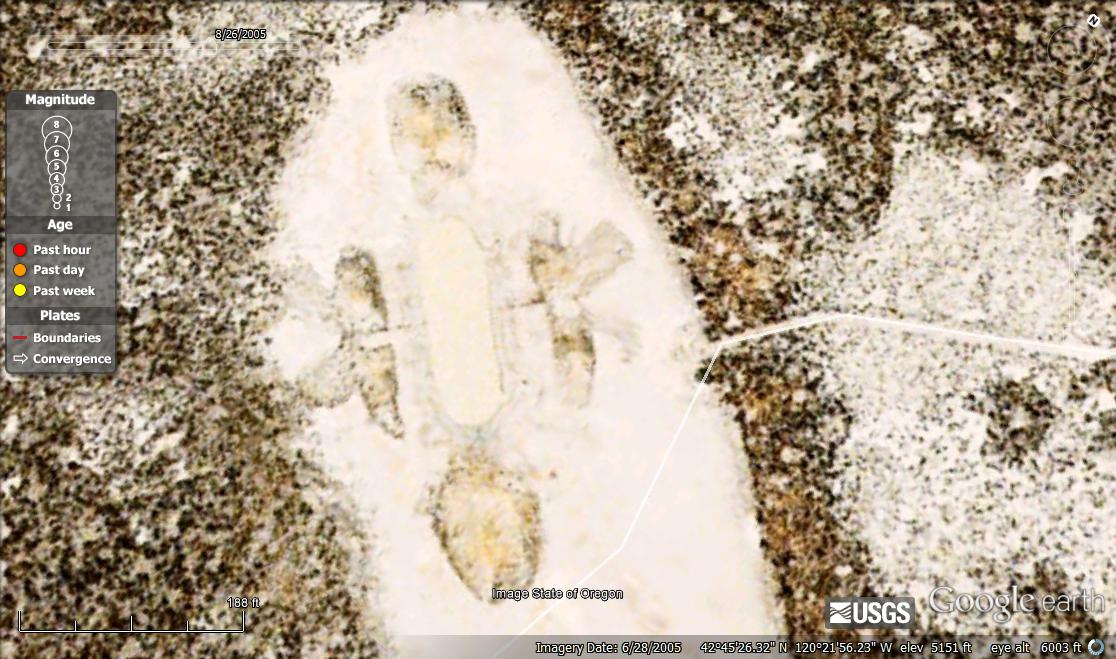 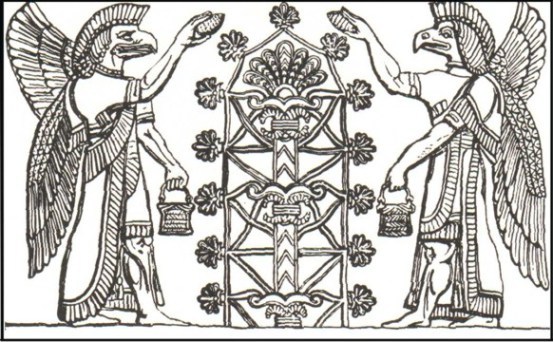 Its been a couple of yrs ago that I saved the image. And I didnt realize at the time that it was important. I wish I would have saved more of the info.

What I find is the fact that the Anunnaki is forgotten by main stream history, or is just a foot note not worthy of discussion.

Nope, I was a dumb ass and didnt realize how rare it was.

The fact that it's called an "Ancient Annunaki Bucket" means that it doesn't have provenance and that the auction house is not trustworthy. I found another bigger image of it here

Second, it appears to be modern. The shape of the bucket is wrong for the Sumerian culture as are the flutings around the top.

The figures themselves are not Sumerian/Akkadian/Mesopotamian. The proportions are wrong, the clothing and crowns are wrong. The king figure is not wearing a kilt but a short robe with a border and striped trousers.

Might be medieval, but it's neither ancient nor Near Eastern.

Can you go into your web history and get the address or the auction house?

Why do you think it was up and then removed?

Also, you might want to read up on batteries and what's needed to make one. Nothing there makes a plausible battery.

You clicked onto my own blog. Thank you for the information. I will compare it to other images and see if I can pin point the era. It would answer a lot of questions if it was authentic.

Im not real computer literate, so I wouldnt know how to get the address.

posted on Aug, 5 2017 @ 07:59 PM
link
the bucket is obviously modern and the pond thingy is just ramdom speculation for an natural or artificial mundane feature

Obviously its just a water pail, but a metal one, covered with ornate symbols.

Only a very rich person could afford to have such a simple household item fabricated from metal. The rest of the ordinary people had to use gourds or bladders made from animal guts.

This would impart a taste to the water that a metal pail would not.

People might say it was so ornate because it was used for ritual purposes, imo, its just some rich persons vanity.
edit on 5-8-2017 by intrptr because: spelling

Most people Ive shown the image to, see honey bees next to two pillars.

Ive also recently read that they are experimenting with creating electric with salt water ponds in Isreal. The ponds in this area are salt ponds. It seems to me that if the lines that make up the honey bee images were made with raw ore, rich in silver or copper or even gold, then yes there is a possibility of electrical generation. At least that is what I have been told by people who experiment with generating electric.
edit on 5-8-2017 by misskat1 because: (no reason given)

originally posted by: humanoidlord
the bucket is obviously modern and the pond thingy is just ramdom speculation for an natural or artificial mundane feature

Obviously modern because theres no apparent corrosion? If it were bronze, okay. If it were gold then it would not tarnish even in the slightest over millennia.

How big is that? Looks like a bunch of bees.

posted on Aug, 5 2017 @ 08:13 PM
link
Interestingly, these ancient Gods or whatever, as the picture in the op shows, use to carry little hand bags around. Even the real ancient recent find in Turkey at Göbekli Tepe had examples of these big giant men with huge forearms carrying these weird looking little hand bags. Check out the link below.

posted on Aug, 5 2017 @ 08:17 PM
link
a reply to: SeaWorthy
My computer is being really slow. 2 yr old grandson was over and he hijacked and crashed it. I will try to get a measurement and get back to you.

Might be old Russian? I'd maybe also guess Turkish or Persian due to the towers with the spiked domes mosques have native to some parts of those regions.

If that pond anomaly pic Isn't photo shopped, it's a real mind # because it's a perfect match to the pic you provided below it. Blew my mind to be honest can we verify its authenticity?
edit on 5-8-2017 by Mikehawk because: (no reason given)

The longs and lats are at the bottom of the image. You will see the current image has part of it washed out, but look at historical images on google earth, that way you can verify it for yourself. Its real, and one of at least a hundred that have images in the bottom of the alkali ponds. Truly remarkable.