Not really sure what happened to the little guy, but I'm guessing he's an inexperienced flyer as a young bird and he flew into the patio door or the wall by mistake.

Anyhow, we had a stunned cardinal on our deck for a short time yesterday. I got him to step up onto a stick and put him on the edge of my mini-rose pot to recover because I thought it might make him feel a bit more secure to be in among some cover.

And we took the brief opportunity to grab some pictures.

Hopefully, he's all right. When we went back out 15 minutes later, he was gone at any rate.

posted on Aug, 4 2017 @ 11:53 AM
link
That's actually a young lady that you have there. They are more dull while the males are the bright vibrant red that you see normally when you think of cardinals. Glad that she supposedly flew away though and seemed to be alright. I always get nervous whenever birds hit the windows because more often than not it's fatal.

I know the females are duller colored, but I also know we have a mated pair in our yard who has been raising their brood. This one isn't a mature one, so I wasn't sure if all young cardinals look the same until the mature. It had patches of red peeking through all over, so I assumed it was a young he who wasn't brightened up yet because he wasn't an adult.

Aww that is a really cute little guy! I'm glad he was well enough to fly off-chances are he survived that impact. Thanks for sharing the pics

I know the females are duller colored, but I also know we have a mated pair in our yard who has been raising their brood. This one isn't a mature one, so I wasn't sure if all young cardinals look the same until the mature. It had patches of red peeking through all over, so I assumed it was a young he who wasn't brightened up yet because he wasn't an adult.

Yeah, I may be eating cardinal... Er, crow here as I did a bit more research myself seeing that they DO stay pretty dull. I can't tell much about the red feathers though from the window pic. but if you saw some reds poking here and there then probably a young male. Either way, glad that the bird was alright.

Obviously a fledging chick. The mother was nearby, feeding it still even after leaving the nest. Rude lesson number one, humans place invisible barriers (called windows) everywhere... fly blind at your own risk.

Good thing you didn't get to close or try to 'rescue' it, the mother will abandon it if you do.

He is quite lovely! And you took an awesome close up! Glad he got his senses back and was able to take wing again. It was very cool of you to help him out as well. Thanks for sharing the pic, something about his pose made me smile right away. Could be his "hair", looks like mine when I first wake up!

Our kid was playing with the neighbor's kids. I'm guessing everyone got spooked and that's what prompted him to crash.

We sent the three of them over next door to play with their dog in the backyard for a while and that did the trick. Let them all get a look from a respectful distance first. Always good to let kids know they are sharing their homes with others.

But even if his momma isn't still feeding him, I assumed she would be, he's still big enough to have a fair shot at surviving alone at that size.
edit on 4-8-2017 by ketsuko because: (no reason given)

Hmmm ... we had a whole flock of baby sparrows in our yard a couple of days ago. Couldn't figure out why they were all out of the nest all at the same time. I don't think any of 'em could fly more than ten feet at a shot. Must have been a couple dozen sparrow mommies and daddies keeping watch over them.

Anyway, they were gone by the time I came home from work ... and none of 'em wound up in the storm drain.


But even if his momma isn't still feeding him, I assumed she would be, he's still big enough to have a fair shot at surviving alone at that size.


By the looks of him, not yet.

Parents still feed chicks some time after leaving the nest. That one looks fresh, the fact he crashed the door proves he's not yet ready for primetime.

Put some seed out on a patio, this time of year I watch fledgling chicks follow mama around the yard, 'begging' from her even though the seed is at their feet.

They have this dance, fledgling lowers head and 'flutters' wing tips, beak open. Momma picks up a seed at his feet and puts in his mouth.

Its so cute to watch. She does it over and again each time she picks up a seed he 'begs' for it, and she hops over to put in his mouth.

I must think that she is showing him which of the seeds is the right one to eat, since I put out a mx of wild bird seed that draws a variety of large and small alike.

A week or two later that same chick is still wth ma and pa in the back yard, but filled out more, more sure of himself, picking up his own seeds.

What a cutie!
I had a young sparrow do the same...and got him shelter from the sun under a bush until he recovered.

Love young birds....we have baby robins, sparrows and grackles begging to be fed, it's a hoot!!! I mean, the food is right there.

Hopefully he flew away!
There have been several baby Killdeer found on the sidewalk beside my office, the business above has large windows.

I've got a neighbor cat stalking my birds and have had to move the feeders to some quite awkward (for me) locations attached with strings that I can lower and raise and wires that one has to pull the small (wouldn't hold weight of a raccoon or squirrel or cat) branches down to load the feeders. The Doves are the only ones eating from the ground, mainly, right now and they are almost bigger than the cat so I'm not so sure the cat wants to mess with them...yet.

Another interesting behavior with the Cardinals, to me, is during 'courtship' the male actually feeds the female. She will perch on a branch and call out incessantly until he gets food and brings it back to her and puts it in her mouth. It actually looks like they're kissing! I've also witnessed the male being very protective of her when she is on the feeder. He will allow the House Finches to perch with her on the feeder but, any other bird will be chased off.

Also, I've noticed the Cardinal (male) is seconded in his nervousness or skittishness only by the Titmouse who I call a 'hit and run' feeder.
The Hummingbirds and the finches seem to be the least nervous and allow me to photograph and film them up close quite often.

Well, I'm sure I've bored to tears anyone who took the time to read! I DO love watching them and playing paparazzi when they are in my back yard!

Kildeer are just one of the coolest birds!
We have them near our home....and it amazes me they can ever successfully raise young....as I have read they ground nest.

I didn't know that about cardinals feeding their mates....but I do know they are skittish...and that the male does protect the female at the feeder....when you see her at all.

Our golden finches don't use the feeder at all....but feast on the sizable stand of coreopsis I have each year.
One year, I had a golden finch a mu back door wall, as if begging me to come and set out food. They are soooooo tiny.

Do you have chickadees? The are fairly brave as well...I had one land on my hand once.


Do you have chickadees? The are fairly brave as well...I had one land on my hand once.


Oh my gosh how cool!
None of the birds in my sanctuary are quite that trusting of me yet.
One of the chickadees. 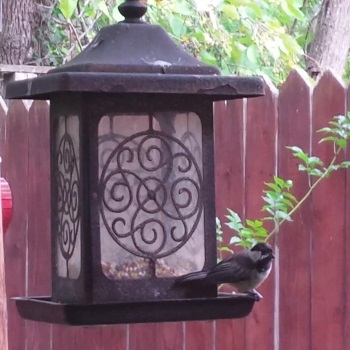 Some do let me get fairly close though, I think they are just hams for the camera!

I've been told they can get used to you....so if are out there when they area around....what I did was have a bit of seed in my outstretched palm. I stood there for a bit...and he landed.....you could barely feel him, they weigh so little.

My husband was near enough that I was able to get his attention, so he saw it.
Only happened the once, and I have tried since then a few times.