Vladimir Putin is bathing in blood extracted from the severed antlers of Maral deer in an attempt to boost his health, according to extraordinary reports in the Russian media.

Ahead of a visit to the Altai Mountains last year, some 70 kilograms of stag antlers were prepared for the Russian leader 'to take antler baths', reported a local media outlet.

The ancient tradition is seen as a testosterone-driven elixir to improve male health and potency, and he is said to be taking the blood baths several times a year.


Reading the title, you might've thought this was going to be about some sacrificial-satanic-esoteric ritual , but unfortunately - even to my own dismay - it is not, well atleast I don't think so. I put this in skunk works because it's an uncorroborated claim from DailyMail (and others), but I don't think it's unfathomable to believe this could be true. This is quite mild in comparison to other snip that really goes down, but interesting nonetheless. (?)

One Altai farm - which exports antlers for use in Chinese medicinal cures - stated: 'Extract from red deer antlers acts as a strong tonic, especially for men's potency.

The antlers were called horns of gold in 15th century Russian literature - and are believed to improve sexual performance.

Blood is extracted and boiled into a broth which is used for red-coloured baths. Some Russians prefer to drink the blood, for example TV presenter Lena Lenina. 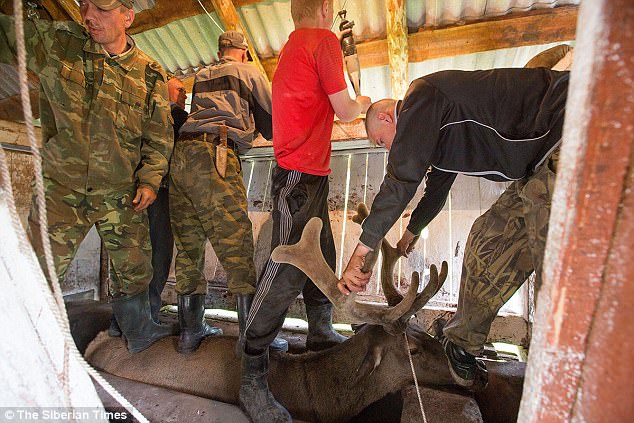 Disturbing accounts tell how the animals are 'herded into a special cutting chamber where a press closes in on the stag from each side, while the floor lowers, so the deer is left in suspended animation, its head thrust onto a ledge as if condemned to the guillotine, its hooves flailing but unable to touch the ground'.

Observers say the creatures are 'bewildered' and 'shellshocked', their eyes 'bulging with fright' .

'Two or three stand on the stag's back from above, one holds the prized antlers, his trainer on the animals muzzle, immobilising the head. One cuts the antlers, his foot on the back of the neck, preventing the beast moving a centimetre until it is divested of its valuable trophy'. 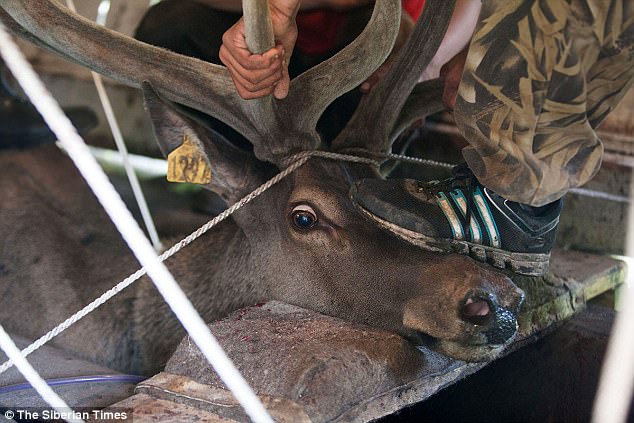 I've always been fascinated with all things rituals and practices, especially from ancient times, because I believe they knew a lot more about these things than we do. So is this just a tradition from medieval times still being practiced by those knowledgeable, or is this story all bunk?


Hell, I have German ancestry in my blood and the first kill I made as a child hunting with my father and his friend, I had to gut the rabbit and then my father put the blood of the rabbit on my forhead. One of the proudest moments of my life. Now whether or not they were just BSing me or not, that's another story.

Im a big time deer hunter but I have never bathed in a big tub of frothing voodoo antler blood. Just sayin.

Actually the deer antler velvet has some amazing health properties and is quite often used by athletes and body builders.

The elites sure do love their blood (both literally and figuratively)

I love some of the titles on the ATS Live page right now...

Those pictures make me extremely angry, wtf is wrong with humans? Those terrified eyes show more life than most of the people I know.

Interesting, so maybe there is some truth to this.

I've always thought that antlers were nothing more than bones, like our finger nails, but they are velvety and have blood running through them..

I wonder what purpose it served through evolution? I'm no antler expert, but I'm assuming now it's something really important to their health.

Antlers are used in fighting for mating rights.

I'll admit when I first saw the title, I was hoping it would be about some kind of occult ritual.

Oh well, still more interesting than some other stuff being spammed here.

Yea, I knew that much already, but seeing how evolution works -- assuming evolution is real -- I wonder how it even came about to begin with.

originally posted by: seasonal
a reply to: knowledgehunter0986

There's more then one elite. That's why they want us to hate them so much.

posted on Jul, 19 2017 @ 07:02 PM
link
This isn't going to do anything for Putin. Unless deer blood is a solvent (and it isn't), like acetone or M.E.K. it isn't going to enter the blood stream through the skin. What an idiot Putin is if he thinks this will do squat for him.. .

originally posted by: skunkape23
I ate the raw, still beating heart of the first deer I killed.
I was told it was tradition.

I think it's a tradition more in the sense of a Snipe hunt. Just seeing if you will actually do it for a laugh. Although I suppose some see some significance in it.

I've hunted since I was old enough to handle a rifle.

On this topic, it appears that Russia has no laws about humane treatment of domestic animals and livestock. It's kind of silly to believe that antlers or blood have any real restorative value.

Vladimir Putin is bathing in blood..you might've thought this was going to be about some sacrificial-satanic-esoteric ritual...

Yup! Baptism in the blood of animals was a cult ritual practiced by secret occult orders like that of the Cult of Mithras..etc..which is where Putin probably got the idea from.

IGF-1 is the answer your looking for.

True..ask Ray Lewis all about it