UFO or Drone? bomb attack at funeral in Kabul Afghanistan (with video)

posted on Jun, 9 2017 @ 02:47 PM
link
Now this is a strange story people. Apparantly last week saturday 3th of June there was a terrorist suicide attack on a funeral in Kabul Afghanistan killing at least 20 people and wounding 35, according to the health ministry. The funeral was attended by senior Afghan government officials including Chief Executive Abdullah Abdullah. There were 3 explosions in total.

Now first let's go into who's funeral this was before we go into the strangeness.

The funeral was for the son of senator Mohammad Alam Izdyar. The son was killed a day earlier and was one of the 4 people that died yesterday (on friday 2nd of June) by the hands of peacekeeping forces at a demonstration in the city of Kabul.
Friday's protesters took to the streets to decry perceived security failures after a massive blast on Wednesday at the German Embassy 31th of May killing at least 90 people in Kabul.
The protesters demand the resignation of president Ashraf Ghani because they hold him responsible for all the violence in the country.

Down below is a video of the attack on the funeral.

Now i've counted 3 things in this story and video that are strange.

1. Wednesdays attack and the saturday funeral attack was blamed on the Taliban. Seems obvious right? But guess what. The Taliban denied both attacks! Now if i was a Taliban terrorist and had a succesfull attack that killed NINETY! 90! people then i would sure ass hell want everybody to know that it was me! Right? So why deny it then? Unless it wasn't them...

2 Rahmatullah Begana, who was at the funeral, said the first explosion went off at the start of the ceremony.
“A few minutes later, there was another explosion. I saw a lot of people on the ground covered with blood,” he said.

^That statement is false. As you can hear in the video after seeing and hearing the first explosion, explosion number 2 and three are a few seconds after eachother.

3 In the video at 2.17 you will see a Unidentified Flying Object or a drone flying by the funeral and then the first explosion. I personally believe it's a drone but it could also be one of the secret UFO's built by the government to start the false flag alien invasion. I'll leave that up to ATS to discuss! At the last link on the bottom you can also see screenshots of the object attacking/bombing the funeral.

Was the attack on the funeral and the embassy really done by the Taliban? Which even they deny? Or was this done by outside forces? My guess is the USA. I don't have proof but they seem involved in all things nasty on this planet. And if it was done by outside forces, what was their motive? Anybody got any ideas or clues?

1st in English 2nd and 3rd in Dutch

posted on Jun, 9 2017 @ 03:01 PM
link
That camera pans the sky a little too much
before the explosion for my comfort.
I'd want to question whoever it was
for sure.
And what a sad situation .


Dang that thing was fast! Did it explode or drop a bomb? The timing too,right when they began to sing...coincidence?
ETA: Looking at the niburu.co source with pics, looks like it dropped a bomb actually, because you can see the object after explosion in last frame.

This source claims ISIS responsible and here is article about ISIS drones. Hmmm
edit on 5pmf30313430 by waftist because: (no reason given)

My thoughts exactly. It looks like a drone or a bomb hitting the crowd. So no suicide bomber in the crowd as they try to believe us. This whole thing smells fishy

Could be. But then comes the question: Why are they lying to us. Who is firing this artillery or rocket.
questions questions but no answers.

The fog of war. If I was to guess, I would think that someone didn't want to admit that attack.

And it's hauling ass too. 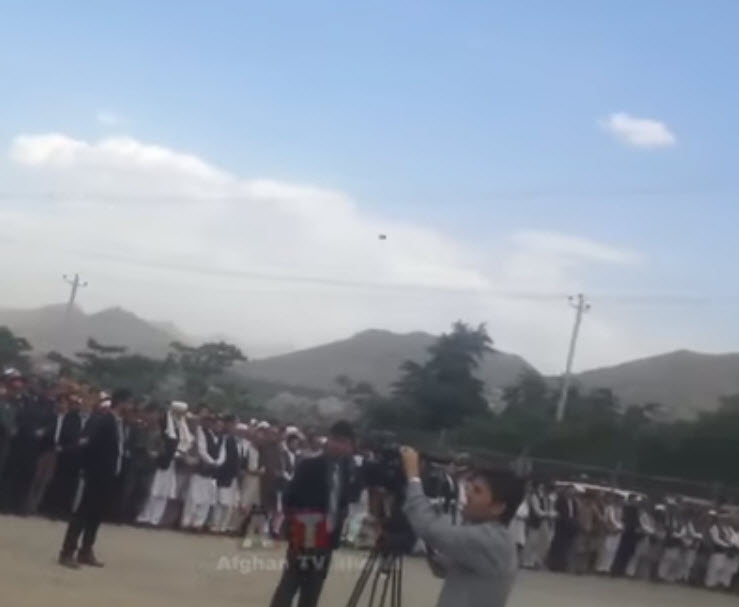 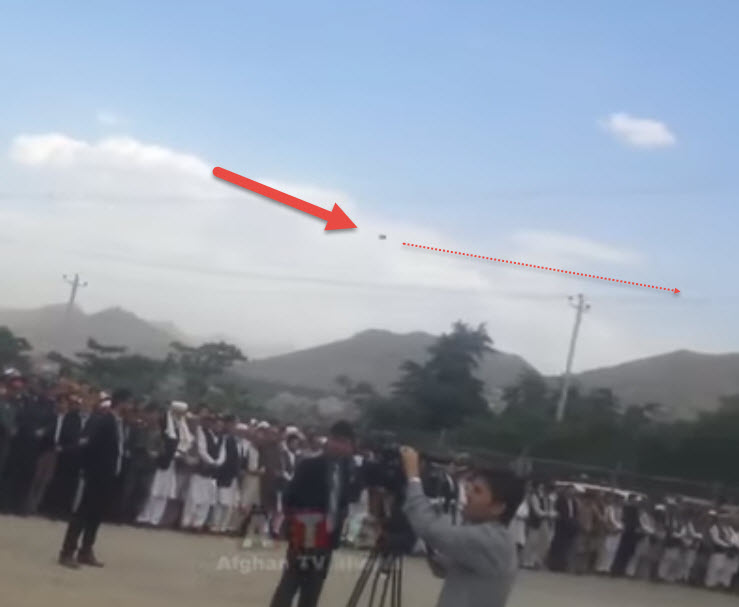 
I saw no drone or UFO and the explosions seem ground based to me, didn't seem like it came from the sky nor did it seem big enough to be a missile. I think it was suicide bombings.

Pause the vid again mate and look where I have indicated. It moves (very fast) to the right. Drone.

However, what intrigues me is the lack of sound. (Not on the video) it was more the fact no one noticed prior to the explosion. But the constant panning to that area by the cameraman is a bit odd. 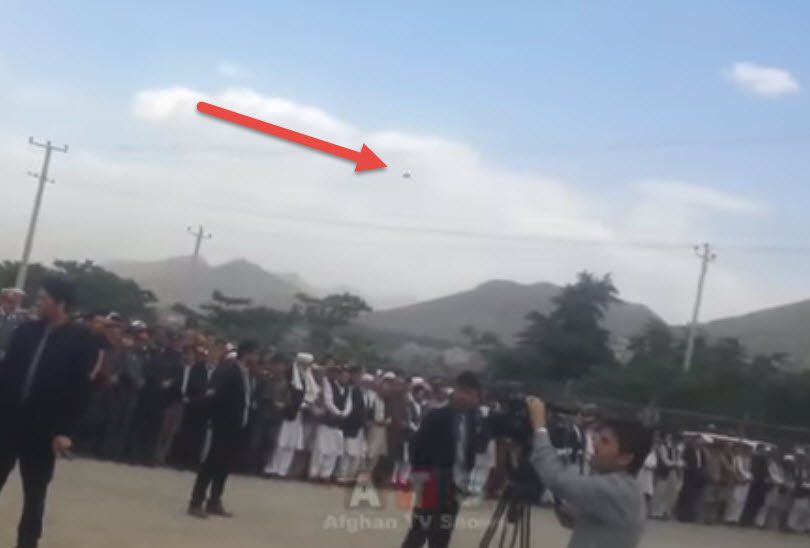 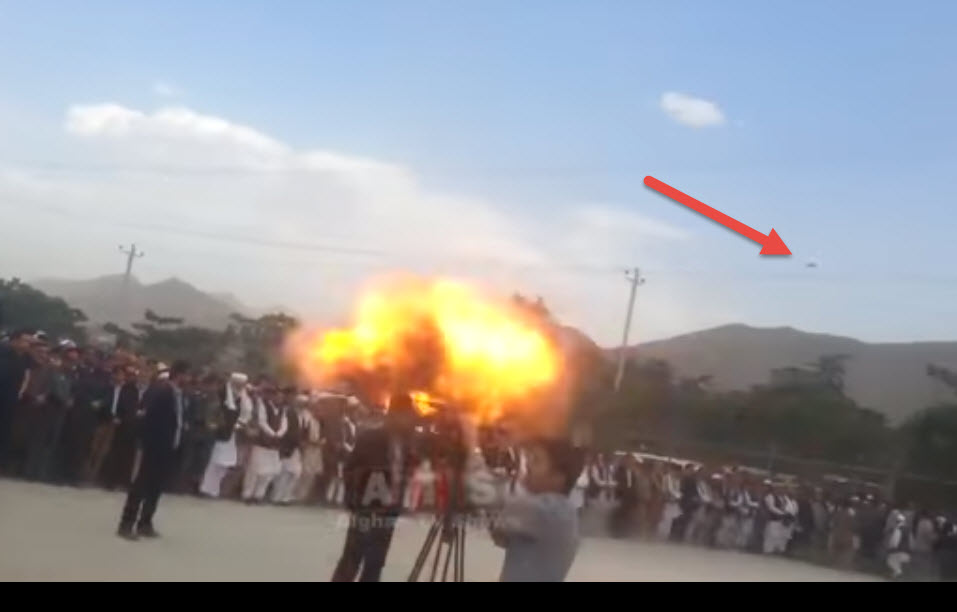 originally posted by: Mandroid7
That was crazy, the object was tiny.

Definitely tiny! About the same size as a bird ...

Big conspiracy. Someone wanted Senior officials dead at that funeral...

Very interesting. I too thought the camera man was panning the sky way to much. Bombing funerals should be a no go and bad omen. I would think maybe this is to high profile to claim. Or yes a drone is in that video dropping or shooting a bomb. Now this would be to obvious if it turned around or circled to make the other 2 drops. The second 2 explosions make me wonder. Was there more than one drone or craft, did it circle or strafe.

I would like to see more before blaming the Americans. This attacking funerals thing is probably a massive chess game for whoever is the actual attackers.

Funerals are sacred in all religions one would think...although some eat their dead but you know what I mean.

originally posted by: CaptainBeno
a reply to: ThePeaceMaker

Maybe a laser guiding drone. I don't know, but you are right it is hauling arse.