posted on Jun, 8 2017 @ 04:15 AM
link
I found a reference to this whilst looking on YouTube and decided to have a further look. The image was captured over a town in Russia, is visible in only one image and not in the preceding image or the one next in sequence... 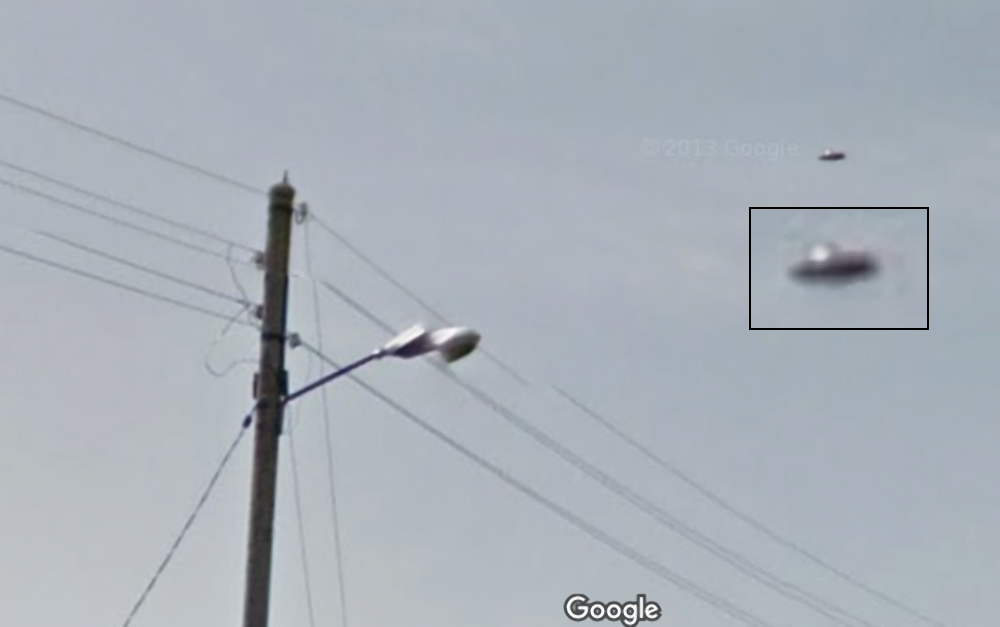 Here are three links to the Google page. The middle link is the image taken containing the anomaly, the other two are the images immediately preceding and immediately after. The anomaly is off to the right, just beyond the truck parked on the street.

I immediately thought it was a prank but when I enlarged and sharpened the anomaly [see insert in main picture] I could make out form and reflection. It looks like some kind of craft with either a bubble or dome-shaped area on top.

It's a strange one.

posted on Jun, 8 2017 @ 04:38 AM
link
Based on that one image, that is a genuine UFO, in as much as it is an object, that is apparently flying and cannot be identified from the available evidence. Anything beyond those criteria would be speculation.
edit on 8-6-2017 by CulturalResilience because: (no reason given)

I think "stitching" The algorithm that connect the pictures google makes will create artifacts like that.

I found it in the fourth image

behind the big white house on the right.
edit on 8-6-2017 by GabarEL because: (no reason given)

No. The streetlight is cut because Google Street View images are a mosaic of images automatically spliced together (similar to how the panorama feature works on the iPhone). The splicing is usually not perfect; many of the street view images have these visible splices.

It is realistic by this time to calmly accept that the major powers all have some level of craft that operate on the classic UFO principles of null-mass. Not that there is parity across the field, but all contenders know and use the basics.

So the images can be real or fake, it makes not one damned bit of difference. The alien UFOs, abductions, photos and radar reconds and reported crashes are real enough as is the whole concept these days that ETIs are out there. Allow that they are here and there is no distracting jump in that simple logic. --'Course there is that major lie that we've been told for over half a century, but they will nicely explain that once the truth dribbles out.

To me the UFO looks like part of the street light. Like those weird panoramic photos we see, could be the 'cutting' put several images of the streetlight across the screen


If perception was proof, then look what I phones are doing to reality. I guess we can blame Mandela on them?

small object in only one photo?
its an BLURFO
it could be litteraly anything, a bird,an bug,an alien spaceship... etc

I found it in the fourth image

behind the big white house on the right.

That object certainly looks to have similar form...slightly oval only this time from the rear[?] and underneath, with light reflecting on the top. I never thought to plot its trajectory, which would take it behind and beyond the white house. I have no idea how fast the Google cars travel but I wonder if someone out there could hazard a guess at the objects speed. Tricky though without distances and size.

originally posted by: BigBangWasAnEcho
Film is horrible proof of anything. An artificial eye witness.


If perception was proof, then look what I phones are doing to reality. I guess we can blame Mandela on them?


That ain't film that causes that,
that is a digital effect.
Props would have never had the nerve to bend like that
if it knew it was being filmed in 8-35mm

Someone has a good throwing arm!

posted on Jun, 9 2017 @ 02:22 PM
link
When zooming in on the small image (also the larger zoomed in box), there is clearly a small rectangle around the object. Looks very cut/paste to me. I'm no picture expert but the background (sky) around the UFO doesn't match the rest of the sky. In a perfect rectangle.

originally posted by: Rhodin
When zooming in on the small image (also the larger zoomed in box), there is clearly a small rectangle around the object. Looks very cut/paste to me.


Sometimes that's just a compression artifact. But even if it isn't a Photoshop job, there just isn't enough information here to tell what it is. We have seen over the past several years that birds can look a lot like classic flying saucers in photos.

However, out of the millions of images Google takes, I can't imagine that this is the only one (two) that managed to capture a UFO.

originally posted by: Rhodin
When zooming in on the small image (also the larger zoomed in box), there is clearly a small rectangle around the object. Looks very cut/paste to me. I'm no picture expert but the background (sky) around the UFO doesn't match the rest of the sky. In a perfect rectangle.

Those "blocky" pixelated areas around objects (usually a contrasting tone object against a homogenous-colored background) are a normal artifact of JPEG compression, and are not necessarily the sign of a cut/paste job. These are called "blocking artifacts" or (more generally) "compression artifacts".

Here is an example of a blocking artifact below that was the result of high compression of the JPG file. The tree is really there, but an blocky pixel artifact is visible where the tree meets the sky. This is a relatively extreme example, but it is a clear example: 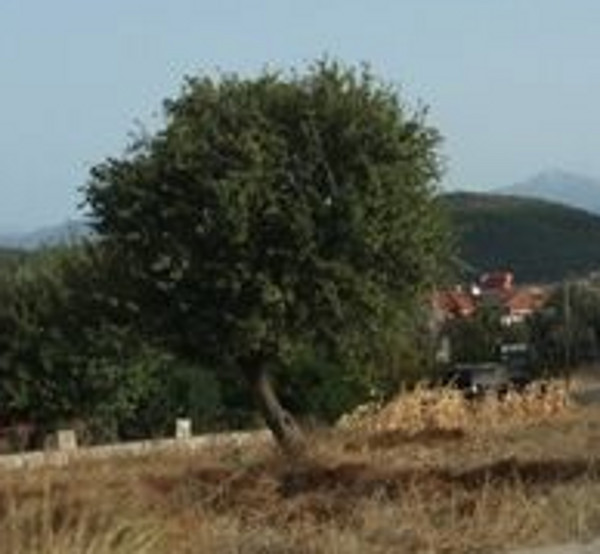 These blocking artifacts are caused by the way the JPG algorithm compresses files. The algorithm does not know the difference between "tree" and "sky"; it only knows pixel values. When this file was compressed, there might have been some ambiguity (in the pixels) between where the tree ended and where the sky began. The JPG algorithm does its best in trying to determine if a pixel near the border between the sky and the tree should be tree colored, sky colored, or maybe something in between -- but sometimes its best is not good enough, and the result is odd-colored pixels -- and those odd-colored pixels end up in 8x8-pixel blocks (or multiples of that), which creates the blocking artifact.


Let's look at the telephone line in the OP's image 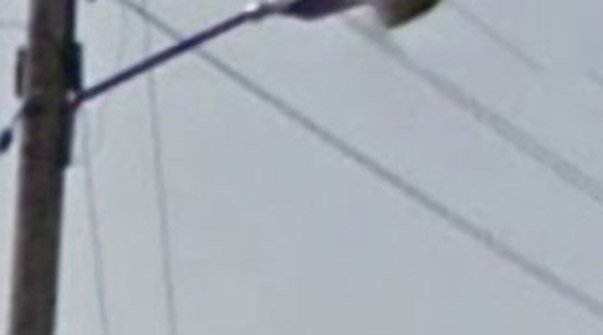 As you can see, there is a halo-like border on either side of the wire where the wire meets the sky. This is not due to copy-pasting, but rather due to blocking artifacts.

Check out these UFO's.

Catching the UFO is no easy task! 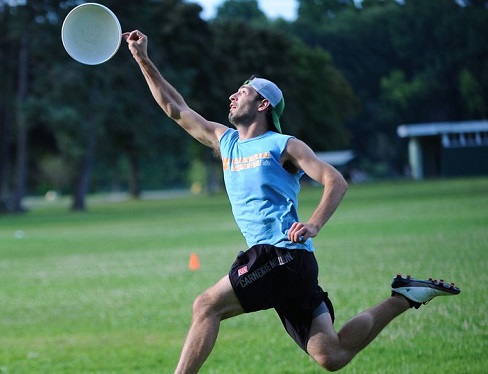 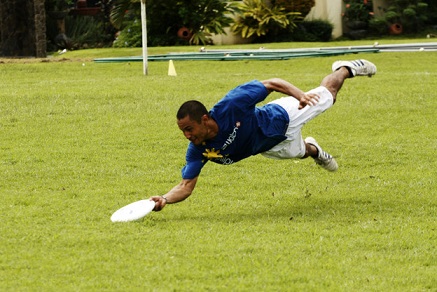 a dual attempt to actually capture a UFO .. ooh rah 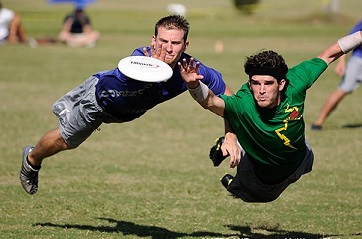 Seriously though, the Video in the OP is most likely a drone someone made to resemble a classic UFO.

edit on 10-6-2017 by RisenMessiah because: chasing drones

Thanks for the artefacts lesson, SGIP.
You are spot-on...but...


Do people not read ALL the posts?!?
From GabarEL...


a reply to: fromtheskydown
I found it in the fourth image.
Image Four behind the big white house on the right. 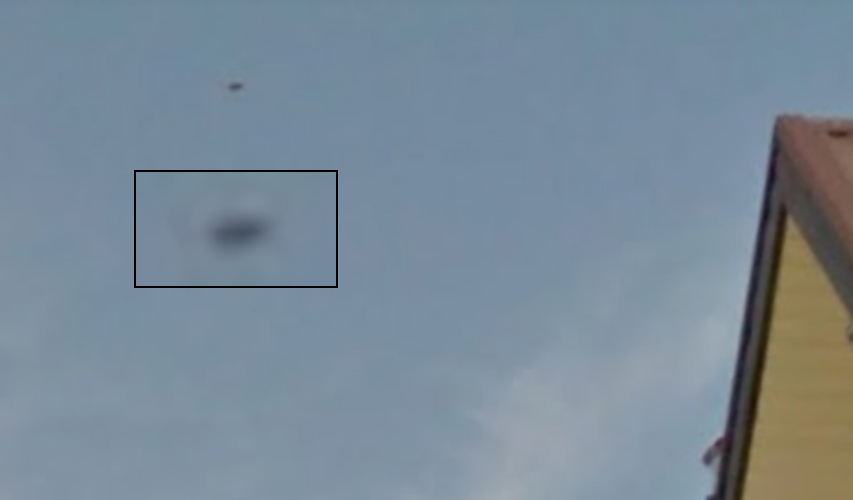 A little more ambiguous than the first image, it is further away after all.
If you look closely, the ellipsoid shape with form, shadow and light reflection is still there.

It looks like the same object...oval, reflective and highly likely on the same flightpath.
It's obviously moving fast.