Looking for a boat to fish smaller lakes in WA. Fishing off of docks or the shore isn't nearly as productive, so I'm thinking about picking up a small boat. The problem is I know pretty much NOTHING about boats. So looking at jon boats, tenders and canoes

I suppose I'll list off the things I'm looking for.

-Would really like to be able to throw the thing in the bed of the truck
-Light enough to deal with alone (I'm fairly strong)
-Accommodate two people without feeling overly tippy
-Tough enough to deal with the occasional scrape
-Budget friendly, I'm not trying to look cool or go fast, just want to be able to get out a little ways
-Motor mount
-It would be nice if it somehow made fish bite
-I'm about 180 lbs and the girlfriend is about 115 , don't think we need much in the way of gear so not super high weight capacity

I really don't want to drop thousands on an engine. I was looking at getting an electric trolling motor. I'm not going to be going out on big lakes or in crazy weather, and again don't care about hauling ass. I'm just lazy. Want something I can paddle or row if the motor craps out.

How effective are those electric trolling motors? Does it make more sense to buy a used gas engine? I'm sort of sketched out about that since I don't know enough to feel confident in a purchasing used. Reviews I've read have been really mixed. I've heard and seen them clip along just fine, but I've also read that some people get stranded because they don't have enough thrust.

If I decide to go with a used boat, any advice on where to look? Checked out Boat Trader and Craigslist and the pickings were fairly slim near me.

Any help is much appreciated.

If you live in WA and can suggest some good shore/dock fishing within 1.5 hours from Seattle, I'm all ears!

posted on May, 30 2017 @ 05:17 AM
link
Strictly fishing.. on small lakes..... You have to consider things like... how long will you be going out at a time. Are you 100% certain you and your girlfriends idea of having a boat wont evolve? I can tell you from my personal experience... get something with a cutty cabin. Nothing like fishing for a few hours.....pulling up on shore and having a Bar-B-Q or docking at a restaurant/bar for dinner.....Later on do a little night fishing..... and then as the night draws to a close you guys head below and turn the seats into a bed.... maybe put on a movie and get rocked gently to sleep by the waves... then ya get up, head over to the restaurant to get coffee and breakfast..... buy some more bait.... start all over.

You can also put small wheels on two corners of the jon boat makes it easier to move around. Also there are some nice small gas engines out there that are fairly reasonably priced. 12 foot jon boat like Gothmog said as long as you have an 8 foot box. I believe you can also find a ten footer. Check and see what bass pro has to get some ideas.

Dunno if they have them where you are, but check out 'polycraft' boats.

just to throw a nother suggestion - a fishing kayak - or a canoe ??

posted on May, 30 2017 @ 06:10 AM
link
Don't waste your time on an electric trolling motor. I did when I first got into it and it sucked. The battery is heavy, pretty much negating the difference in weight between the gas and electric motor, and its slow. Get into a chop that you need to get through and you might not make it. Which means paddling. And a pissed off wife.

I would say get a used square stern fiberglass canoe and a 2 horse gas motor for the back. Portable setup and cheap. If you like it you can then move on to a 12 or 14' aluminum boat with a 9.9 on the back.

I used to have one of these type boats many years ago. They are perfect for fishing anything from small ponds to larger watershed lakes. You can put small gas motors on them, but IMO they are more suited for lakes that you can't use gasoline motors. I have seen them on the larger lakes also, you just may want to be careful if there a lot of larger boat traffic with the waves/wakes and such.
The one I had I could load and unload by myself, and I could just throw it in the back of the truck. However, if I had it to do over again, I would get a small trailer to load and unload it. Get you a good marine battery and a Trolling motor with about 40lbs thrust or more, and you can stay out there all day, and it will push one of these boats with ease. You can even put depth finders on them. In my area, you still need to have them licensed and registered, even when using them on small watersheds.
Hope this helps! Have Fun, Be Safe, and keep them lines tight! 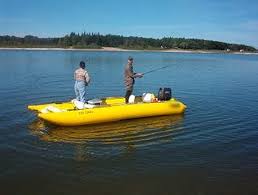 posted on May, 30 2017 @ 08:03 AM
link
Look at a snark. It's a small foam hulled sailboat that you can paddle if you don't want to sail. I absolutely love mine. It's 11'6" so you don't need to register it. It's under 50lbs so easily launched. Totally free to operate, and fun.
Just keep it covered when not in use so uv rays don't eat it. And don't leave in water all year, it will soak it up.

I would say that a canoe, flat-rearend-type with a trolling motor would be easiest to load/unload and get into operation. Also, it would be about the cheapest, way to go. A jon boat sound like an excellent choice except for the carrying, awkward shape and size of it. My Grumman 18-footer river-keeled canoe was easy for me to manage in other days as it weights 86 pounds. It used roof racks, no trailer. Easy to carry from truck to water for two, with a center, padded mount, easy for a young feller like you.

originally posted by: trontech
a reply to: Domo1


P.S. You can take an extra battery if you want.


And even the top-of-the-line trolling motors will be about have the price of the smallest outboard that is nothing more than a reconfigured sort of a lawnmower motor.

About 20 years ago a friend of mine had a Porta-Bote for his 35' sail boat. It was really nice. So for many years I've been wanting to get one. I've been thinking about ordering the 12' one to use for local lake fishing. I haven't gotten it yet. But they seem pretty cool:

Another think I really like is propane gas outboard motors. Some people say they have maintenance issues. But if you read the manual you have to lay them down on one side. If you lay the motor down on the wrong side it leaks out oil. So people don't read the directions. But I'm pretty sure I will get one of these at some point. I just love the idea of using propane. It's the perfect fuel for boating:

Should I get an Outboard

Thats old school ... I do all my fishing by Hoverboard or either Drone...What a bunch of losers...

Perhaps something close to a 20ft dinghy with a 40 HP outboard? if it's out on a lake you won't need much grunt and 20ft would be enough to store the catch and make room for fishing gear and a passenger, after all you aren't looking for a trawler just a day on the lake.

As for a used boat, check your local printed classifieds if you can.

posted on May, 30 2017 @ 11:14 AM
link
I agree. All the people saying a canoe when the stipulations were that it not be tippy and suitable for 2 people fishing are silly.

At 180 if you have a high center of mass sitting on a bench seat in a canoe and casting is a pain and the girlfiend is probably going to be annoyed.

If you keep an eye out OP maybe you can find one with a motor. Other posters are right about the battery bein heavy on electric. Really only worth it if you have Cabelas points or gift cards to burn imo.


This is only a one person boat, but they look really cool. If you go this route, let me know what you think please.

posted on May, 30 2017 @ 12:58 PM
link
Check craigslist and search for aluminum boats, I just checked Seattle listings and found some in decent shape for under 500$. Electric trolling motor should work fine for what you are trying to do and can find them used for relatively cheap under 100$. You might want to get a truck rack because putting a 12' boat in a 6' truck bed is difficult to pull off. Also it is a good idea to get a battery box with a charge indicator so you know how much power you have in the battery 30$-80$. If you decide to get a gas powered motor go with a 9.9 hp or lower that way you won't have to register the boat. Also if motor is 15hp and above you have to get WA state boaters liscense.

I recently took my 12' boat with electric trolling motor out on baker lake which is a big lake and had no problems. Here is a link to the Catchable Trout Plant Reports this is a good tool to find lakes and which ones were recently stocked with trout. As summer approaches they become more difficult to catch with the rising temperatures, so get your fishing in soon. Salmon season is coming up and it is a Humpey year (pink salmon) so lots of river fishing to be done when the trout become scarce.