The perplexing cosmic object known as "Boyajian's star" is once again exhibiting a mysterious pattern of dimming and brightening that scientists have tried to explain with hypotheses ranging from swarms of comets to alien megastructures. Today (May 19), an urgent call went out to scientists around the world to turn as many telescopes as possible toward the star, to try and crack the mystery of its behavior. 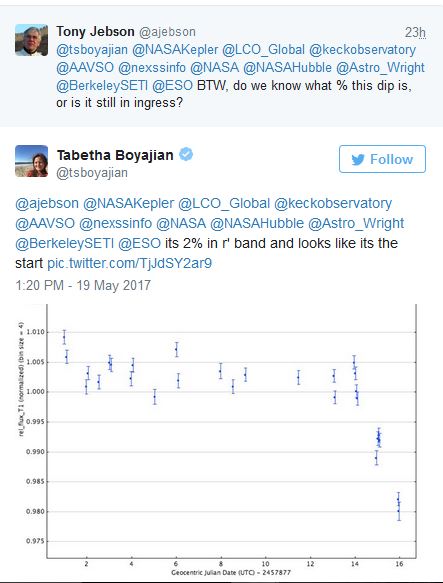 According to the article, the 'Breakthrough Listen Initiative' have swung their 'scopes around already.

Breakthrough Listen will harness two of the world's largest telescopes — the 100-meter (330 feet) Green Bank Telescope in West Virginia and the 64-meter (210 feet) Parkes Telescope in Australia — covering 10 times more of the sky than previous SETI programs, scanning at least five times more of the radio spectrum and doing so 100 times faster. "We will be examining something like 10 billion radio channels simultaneously," planet-hunting pioneer Geoffrey Marcy, an astronomer at the University of California, Berkeley, said at the news conference. "We're listening to a cosmic piano, and every time we listen with the telescopes, we'll be listening not to 88 keys, but 10 billion keys."

The boys at The Wow Signal Podcast are already discussing it and they are always worth listening to. They are all working scientists who discuss space and SETI intelligently and without so much jargon that you have to be a niche scientist to understand them.

Here's a video about the star for people who've been living under rocks for a year. The woman in the video is who the star is nicknamed after

The plan to aim as many observatories as possible is so they can work out why the heck it dims at rates and periods that are previously unheard of. There are two or three theories that appeal the most and none if them fit all the data so far. By watching the dimming event 'live' there might be some aspect that was hitherto unnoticed or the available observatories weren't able to view in certain wavelengths. This time the full weight of the astronomer community and resources will be brought to bear on this most mysterious and puzzling star.
edit on 5.20.2017 by Kandinsky because: (no reason given)

Last time the scientists created an alien megastructures hype, it turned out to be simple comet swarms.

I don't see how it can't just be another comet swarm, with different orbital periods?

Maybe the "alien" hype is getting the scientists some exposure and some funds?

My favourite speculation is it's an enormous Nibiru-style mothership heading our way and zig-zagging to avoid detection.

The most likeliest explanation (in basic terms) is it's all about the life-cycle of Tabby's Star and the dimming is an outcome of early death throes.

Comet swarms have been ruled out by everyone who's taken the time to run the simulations, study the image plates etc. It's a dead-end.

Hm. I still dnt think it's alien just because it doesn't fit our models. As far as we know, it could be some interaction with dark matter affecting nuclear fusion in the star itself, through the W force or something.

In any instances, SETI has already checked for communication signals there, and found none.

I would like to hope that in the four "theories" for the explanation of the dimming that one of them suggests that the cause of the dimming is a body in space far, far from the star--and therefore not a feature of the star--sometimes simply blocking the emanations from the star, when in fact the star, itself, is not responsible for the observed fluctuating phenomena.

Of course, that "theory" implies that a body is approaching directly toward us from the star.

posted on May, 20 2017 @ 07:43 AM
link
For something so big to be brightening and dimming so rapidly is mind boggling. It's actually a bit frightening to think of the forces that must be at work here to make something so big change so drastically so quickly, if its the star itself and not some other factor
edit on 20-5-2017 by 3danimator2014 because: (no reason given)

Thanks for the update mate , it's great to see a coordinated effort by amateur and professional astronomers to track down the mystery surrounding Tabby's star , I really hope that in the coming weeks or months they can rule out the prosaic and open the door to the extraordinary.

It's not the only star who's been showing erratic dimming. A bunch of other stars are also showing similar behaviour.

Unless it's the same species of aliens who decided to go constructing dyson spheres all over the galaxy at the same exact moment relative to Earth time, timing themselves to get busy right about the time Earth scientists starts looking for them, I believe the simplest cause for the dimming is a natural (and long-lived) one.

originally posted by: swanne
a reply to: Aliensun

Well, I see that my earlier concept in an earlier thread about this strange star has been taken up by others, so good.

Couldn't it be clouds of debris/gas orbiting at different orbits and as they occlude the light it causes the seemingly erratic dimming?


I believe the simplest cause for the dimming is a natural (and long-lived) one.


Not sayin it isn't natural but that doesn't mean I can't hope for something extraordinary.

Surely that would be a constant?

I personally have the strange feeling that the brightness variations are related to something that affects the star's nuclear rate. I keep on getting the picture of the star burning filaments of dark matter or something.

Of course, this explication might be a bit boring compared to the sensationalist claim that it's alien, especially right at the same moment the movie Alien: the Covenant is coming out.

I can't help but notice that the claim that "it's probably alien" has been timed with the coming out of the new Alien movie, the sequel to Prometheus. I just hope this isn't all just another Hollywood-driven hype.

Also, the erratic nature of the dimming excludes the possibility of a dyson sphere. Dyson spheres have a regular period around the star, physics doesn't allow so large a mass to just shake and dance the twist so quickly. Unless the purpose of the alien dyson sphere is to get everyone on it dizzy, of course.

In the last instance, yes, it turned out to be a comet swarm.

That's why I'm sceptical about the alien thing.


What is a 'constant'? Haley's comet is a constant but with a relatively long period. If you had multiple, fragmented clouds of debris/gas orbiting the star at several widely different orbits and those orbits were tilted relative to one another it could be a constant but the time period to identify that constant could be very long. That is, there could be a constant pattern but that pattern doesn't repeat for 1,000yrs.