Former Democratic presidential nominee Hillary Clinton spoke out Thursday about how she would respond to Tuesday's chemical attack in Syria, promoting U.S. action to prevent further attacks with civilian casualties.

In Hillary's opinion the US should have been more willing to confront Syria's pres before Russia got involved. She thinks the US should "take out" their air fields. She figures this will stop the bombing of it's people and stop the sarin gas attacks as well.


Speaking at the Women in the World summit in New York City, Clinton said that the U.S. "should have been more willing to confront [Syrian President Bashar al-Assad]," before Russia got involved in the country's civil war and with Iran's participation limited to ground-based assistance.

"Assad had an air force and that air force is the cause of most of the civilian deaths as we’ve seen over the years and as we saw again in the last few days," said Clinton. "I really believe we should have and still should take out his airfields and prevent him from being able to use them to bomb innocent people and drop sarin gas on them."

I thought she was still in the woods?

She should go back there.

None of them gave a # when thousands of civilians are killed by "Moderate Rebels / ISIS" or when entire cities are turned to rubble.


She is self important, and needs to earn. The servers are down so of course the donations are down as well.

originally posted by: stosh64
a reply to: seasonal


Guess whos going to send boots in syria, oh by the way i cant stand the witch.

Go back to sleep Hillary, your government is in control.
edit on 6-4-2017 by Wide-Eyes because: (no reason given)

Because her team is out of power. So it time to arm chair quarterback.


originally posted by: stosh64
a reply to: seasonal

Guess whos going to send boots in syria, oh by the way i cant stand the witch.

Yes he is going to send troops to fight Daesh but he never said anything about invading Syria. I trust Trump to do the right thing. The Leprechaun however needs to keep her mouth shut.

TPTB are still trying to sort out how they lost, Hillary is still campaigning.

Maybe she should just call on John McCain to ask his buddies to stop manufacturing chemical agents which are frequently used in Iraq and other parts of Syria by ISIS and other rebels, which the Deep State loves to conveniently ignore??

Charles Shoebridge, a British security analyst and counterterrorism expert, says “There is a pattern of these incidents taking place at critical moments from a geopolitical perspective,” he said, adding that a massive chemical attack in the Syrian city of Ghouta in 2013 happened just as “the UN inspectors were arriving in Damascus,” while another chemical attack in September 2016 took place on the eve of a “major conference in London, where the Syrian opposition met with its foreign donors.” He also drew attention to the suspicious timing of the attack, which occurred just days before a major conference on Syria in Brussels.

Ammar Waqqaf, a Middle East expert, also believes that “whenever there is a sort of international conference on Syria we suddenly have these chemical attacks.”

If the Syrian Army is not using chemical weapons even against the advancing militant or terrorist forces, like ISIS, why would it use it against civilians at a specific point of time?”
He added that the militants themselves have repeatedly carried out chemical attacks and are quite capable of producing or purchasing chemical agents.

“We saw videos on YouTube of jihadists making experiments on rabbits using Turkish-made chemicals. We also had videos of chlorine gas clouds in Sheikh Masud area in Aleppo after it was bombarded by Jaish al-Islam. Jaish al-Islam then said it was a mistake and vowed that those within its ranks, who did it, are going to be punished, adding that such weapons are designed to be used in serious combat. Later, they completely denied their involvement.”

I just found this doing a bit of digging. 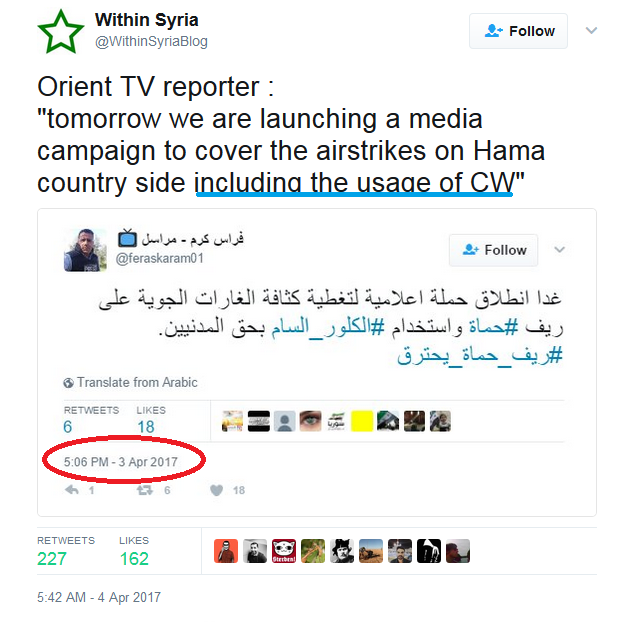 and because they tried to delete it, it was archived right twitter.com..." target="_blank" class="postlink">here. It will get deleted though, I have seen the edits happen in the waybackmachine also.

I guess it does not embed correctly due to the format of the url. Just copy and paste though. This appears to be similar to when the news reported WTC7 destroyed before it happened.


What you talking about? Theres at least 1000 pairs of boots already in Syria. Hundreds of Marines and other army personnel as well as Special forces.

posted on Apr, 6 2017 @ 07:50 PM
link
Huh Evelyn Farkas supports the idea of bombing Syria. I'm now convinced that it was a false flag. The Left is falling over themselves to support this war. Huge red flag.


What you talking about? Theres at least 1000 pairs of boots already in Syria. Hundreds of Marines and other army personnel as well as Special forces.

Oh you mean the guys that are training isis. Yeah.

Thank you President Hillary Clinton for having the balls to act in such a truly presidential manner in these very, very, tremendously very situations.

But we pretty much know Hillary is a hawk, and always has been, so this is not surprising. What's interesting is how Trump has "suddenly changed his tune." Seems he might be falling victim to the WarIsGoodForTheState political cycle, and is simply being strung along about what's good for the "state" (as he is forced to listen to more people outside his comfort zone). He's weakening, he's becoming the puppet. Watch him.

posted on Apr, 6 2017 @ 07:55 PM
link
I don't know what the right answer is on Syria, and I don't think we know yet who used the gas. But I don't think that blowing more Syrians up and having the rest become refugees that the left wants to scatter around the world is the answer. Everyone hates that we have become the world police, yet that's her first response. Time for the good ole USA to come in a apply justice, huh? Except that nobody there would think its justice, just another reason for them to hate the USA. The problem is that would mean officially going to war with Syria, its never just blow up some airfields as a slap on the wrist and then "Mission Accomplished".

But yea my first thought was like others, we don't want to hear what you think Hillary just go be a grandma.

Of course it's a red flag. Even trump said he wouldn't want to get involved in Syria when he was running for his presidency. He is being forced into this conflict one way or another.

Its been planned for the longest when Hilary would take office.. but that didn't happen.

So they had to pull an audible on the game plan to get trumps attention to continue their mission.

posted on Apr, 6 2017 @ 08:18 PM
link
Wouldn't it be great if Trump did a real investigation, found out who was involved, announced it at a press conference and turned them over to the Syrian authorities.

Weird that Trump must have gotten the message from HRC. Trump ordered an air strike against a Syrian air field.