posted on Apr, 6 2017 @ 04:49 PM
link
Mirror neurons are a fascinating and fairly recent concept. These "mirror neurons" are thought to be involved in our ability to relate to one another, including the sense of empathy. 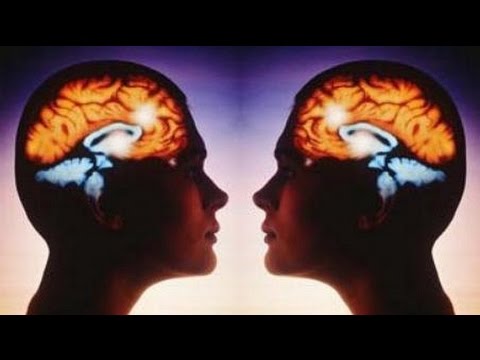 A mirror neuron is a neuron that fires both when an animal acts and when the animal observes the same action performed by another. Thus, the neuron "mirrors" the behavior of the other, as though the observer were itself acting. Such neurons have been directly observed in primate species.

The research and understanding of mirror neurons is very much in its infancy, but there are a lot of interesting ideas coming from doctors and professionals about mirror neurons.

They argue that mirror neurons may be important for understanding the actions of other people, and for learning new skills by imitation. Some researchers speculate that mirror systems may simulate observed actions, and thus contribute to theory of mind skills,[7][8] while others relate mirror neurons to language abilities.


If true, I would imagine that these mirror neurons play an important roll in our early development as infants.

In regard to developing senses of empathy and understanding intention of others:

Brain imaging experiments using functional magnetic resonance imaging (fMRI) have shown that the human inferior frontal cortex and superior parietal lobe are active when the person performs an action and also when the person sees another individual performing an action. It has been suggested that these brain regions contain mirror neurons, and they have been defined as the human mirror neuron system.[


Other studies have shown possible proof of mirror neurons regarding the sense of empathy for another:

Stephanie Preston and Frans de Waal,[53] Jean Decety,[54][55] and Vittorio Gallese[56][57] and Christian Keysers[3] have independently argued that the mirror neuron system is involved in empathy. A large number of experiments using fMRI, electroencephalography (EEG) and magnetoencephalography (MEG) have shown that certain brain regions (in particular the anterior insula, anterior cingulate cortex, and inferior frontal cortex) are active when people experience an emotion (disgust, happiness, pain, etc.) and when they see another person experiencing an emotion

Further explanation regarding mirror neurons, empathy, and theory of mind:

In Philosophy of mind, mirror neurons have become the primary rallying call of simulation theorists concerning our "theory of mind". "Theory of mind" refers to our ability to infer another person's mental state (i.e., beliefs and desires) from experiences or their behaviour.

There are several competing models which attempt to account for our theory of mind; the most notable in relation to mirror neurons is simulation theory. According to simulation theory, theory of mind is available because we subconsciously empathize with the person we're observing and, accounting for relevant differences, imagine what we would desire and believe in that scenario.

Potential applications of further research could lead to treatments of certain disorders where empathy is seemingly diminished.

I also have suspicions about mirror neurons and certain experiences we have (such as people thinking the same thing at the same time).

All in all I believe there is a lot of promise in studying mirror neurons and potential treatments for disorders, as well as understanding our selves better.

posted on Apr, 6 2017 @ 06:44 PM
link
We can empathize with others because we are really all fundamentally the same, beings of light inhabiting a body. When we look at each other we see our own reflection, that of light bouncing off of a mirror image of ourselves. We all share the same universal body and we all share the same light.

The divine in me bows to the divine in you. I love you as I love myself because you and I are the same, mirror images of one another. To hurt you is to hurt myself, that is what empathy is all about in my opinion.

posted on Apr, 7 2017 @ 01:42 AM
link
Treat others as you would have others treat you.
Pretty simple concept.
I almost feel pity for the ones that don't get it.