posted on Mar, 30 2017 @ 05:19 PM
link
So we all know this doesn't favor consumers and this was just brushed through for ISPs to make some extra cash. The problem many communities only have one option and are already charged a high rate which doesn't even go back in to making a better network, getting higher speeds or even improved stability.

Many of us already know that. But this instance shows how to much corporate interest in politics, and the heavy wallets they use to drive campaigns and even lobby the hill.

Republicans in Congress just voted to reverse a landmark FCC privacy rule that opens the door for ISPs to sell customer data. Lawmakers provided no credible reason for this being in the interest of Americans, except for vague platitudes about “consumer choice” and “free markets,” as if consumers at the mercy of their local internet monopoly are craving to have their web history quietly sold to marketers and any other third party willing to pay.


The Verge
I won't include the list as it is too long. And I found an image but I'm on my mobile and cannot embed, I'd be pleased if someone could. Here's the link

This happens all to often, whether military interest, banks, telecom, and many others, our interests are rarely considered.
edit on 30-3-2017 by CriticalStinker because: (no reason given)

Didn't you know, Lobbyist run congress, their lawyers make write the laws that congress pass for a good price, that is how politics play in our nation.

I used to have a signature that used to read, If I had a million dollar I would buy me a political rat in congress 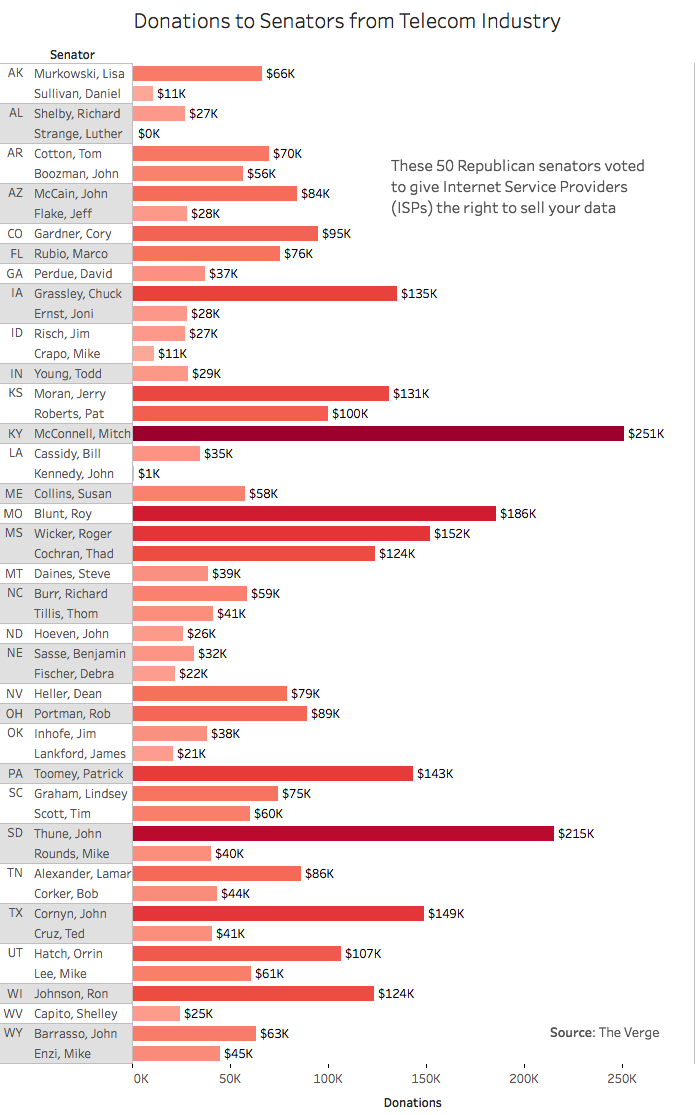 Honestly, Democrats are more protective of Americans from corporate threats, than Republicans. On this issue, President Trump should put on his Democrat hat and side with them.

posted on Mar, 30 2017 @ 06:18 PM
link
Pretty much figured this is what was going on, being it's all part of the oligarchy. Now the one/s clamoring on that it doesn't happen, thoughts? Damn well it happens within the DNC and GOP as seen here.


What are you insinuating?

We all know congress is controlled by special interests. Yet voters keep voting these sell-outs back into office! There's two things I can agree with Trump 100% - Term Limits and eliminating Lobbying. I would rather him focus more on these two issues than anything else. It's the only way the people can start getting back their government. Once that's established, he should start focusing on reducing representatives salaries and benefits so they're more in-line with the majority of Americans. Maybe than we'll have representatives who can relate to the daily struggles of most Americans.

Democrats got big money from telecom too. And voted no. weird

That's because Democratic politicians aren't inhuman pieces of s#$% like Republican ones are, though they have plenty of problems for sure.

Democrats got big money from telecom too. And voted no. weird

That's because Democratic politicians aren't inhuman pieces of s#$% like Republican ones are, though they have plenty of problems for sure.


Silliest thing I've read today. Corruption and colossal mistakes have been made on both sides of the isle throughout history.

When you say things like that it belittles both parties pillaging and selling the American people out.

Are they really though?

originally posted by: sooth
a reply to: carewemust

Are they really though?


I believe that Democrats do a better job of protecting Americans against abuses from corporations. What immediately comes to mind is some Consumer Protection law that the Obama administration put into effect.

Before that law, if a Credit Card or Car Note payment was due on the 20th and the 20th was on a Sunday, the company could hit you with a late-fee, if you didn't pay before a certain time on Friday. I know, because I've paid quite a few late fees for that reason.

Now, if my Kohl's credit card payment is due on the 20th, I can log in and pay it on the 20th, no matter what day of the week it is.

I also got a $200 Best Buy gift card because of a complaint I filed with the Obama Consumer Protection Agency, against Best Buy, for not honoring the terms of their "price match" guarantee.

Republicans stress keeping Americans safe from foreign enemies and violent crimes. Democrats know that big corporations will screw the little dumb consumer whenever they can...and are keen on putting in protections.

The_Donald had quite a meltdown about it. I guess being outed as white supremacists doesn't bode well for employment.
edit on 3/30/2017 by Kali74 because: (no reason given)

posted on Mar, 30 2017 @ 11:58 PM
link
So here is what I want to do with this new found "freedom" on the internet. I want to purchase the communications of the family members of all these right wingers so that I can post them freely for everyone to read.

Trey Gowdy was on the take? For serious?

The_Donald had quite a meltdown about it. I guess being outed as white supremacists doesn't bode well for employment.

Source? When was he 'outed' for being a white supremacist?

I must have scanned the thread too quickly so forgive me if I missed something but, what in the hell does Trump (allegedly) being a white supremacist have to do with the OP?

Again sorry if I missed something, it's been a long day and I'm just now catching up on all this action.