posted on Mar, 30 2017 @ 07:18 AM
link
Years ago after my grandfather died, my grandmother handed me a brown paper bag and said "here take this" as she shoved at me. She was obviously nervous to have such a thing in her possession and eager to get rid of it. Inside the bag, wrapped in an old handkerchief, was a little pocket pistol. I had never seen it before and never heard of the brand either. 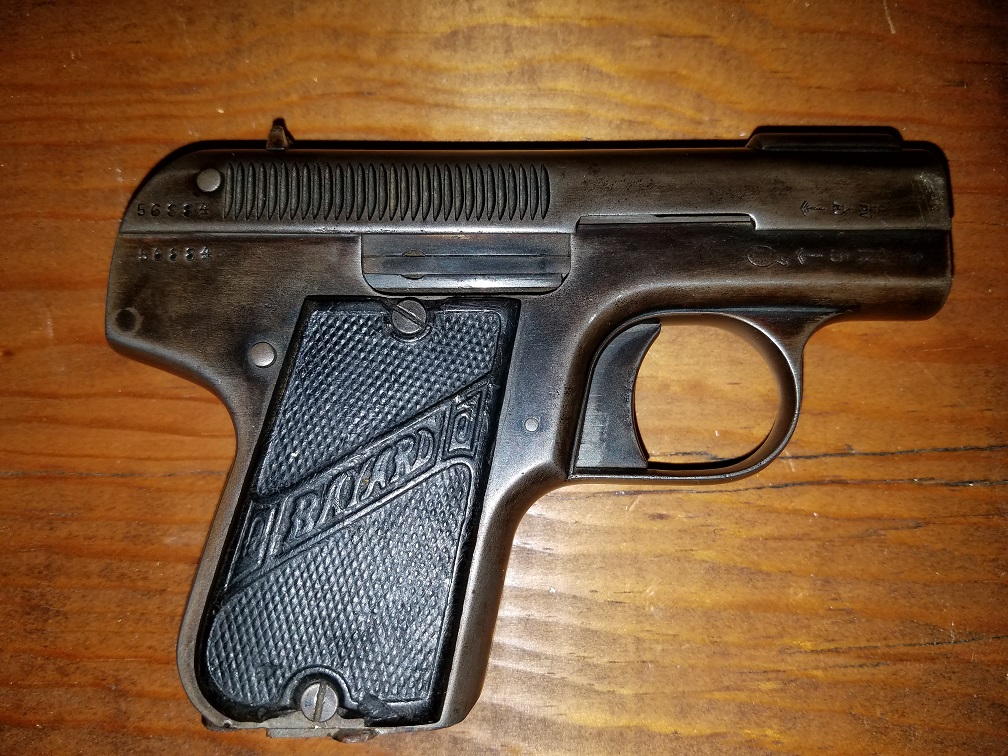 Manufactured by Acniens Etablissements Pieper or A.E.P, this model is called the 1908 but didn't show up until late 1909 or early 1910. It was produced in 3 different calibers, 6.35, 7.65, and 9mm. It is unique in that the barrel is beneath the return spring.

In 1914 Belgium was under German occupation and the Pieper factory was used in the production of rifles and ammunition for the Germans. Production of the pistol continued but now they had the added German proof marks along with the Belgium ones. I am not sure if mine is pre or post German occupation. If anyone knows about proof marks please let me know. (pictures of proof marks will be below). I have read that if it has the German Imperial Eagle, it is worth more and also all of the German ones were in 7.65, which this one is. I have been able to deduce that this is a second variant pistol though. It has 2 screws for the grip panel where as the 1st variant only has one.

This thing is tiny. I can completely cover it up with my hand. 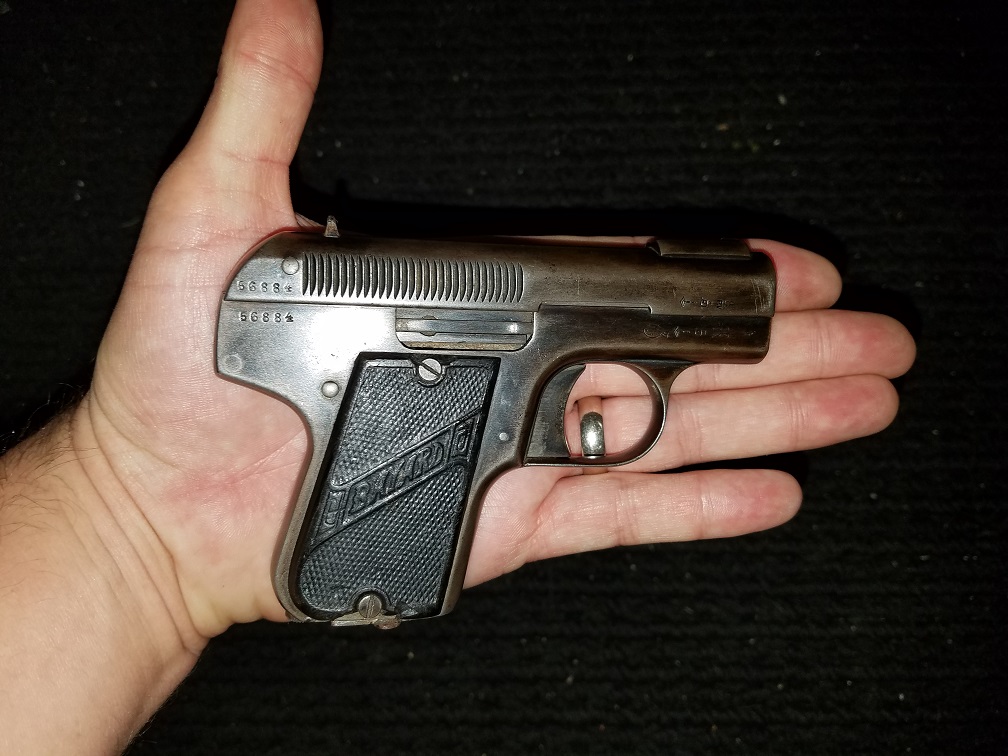 Here is a comparison to a full size 1911. Also interesting that these guns were designed at the same time. (though my 1911 is a modern iteration) 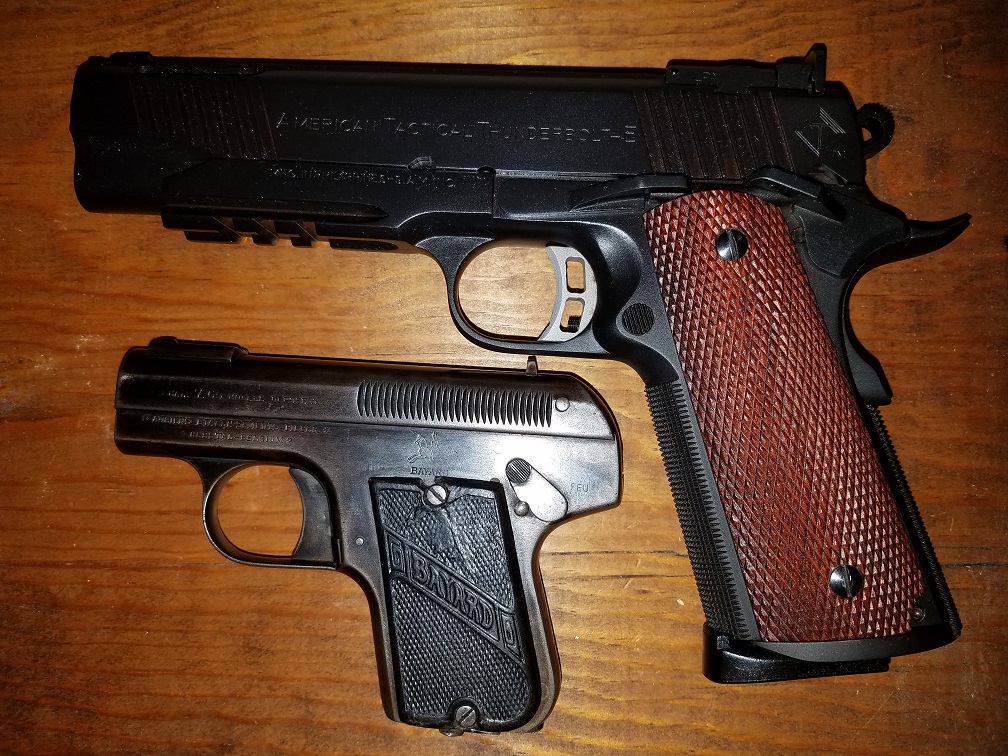 Here is a picture of the proof marks: 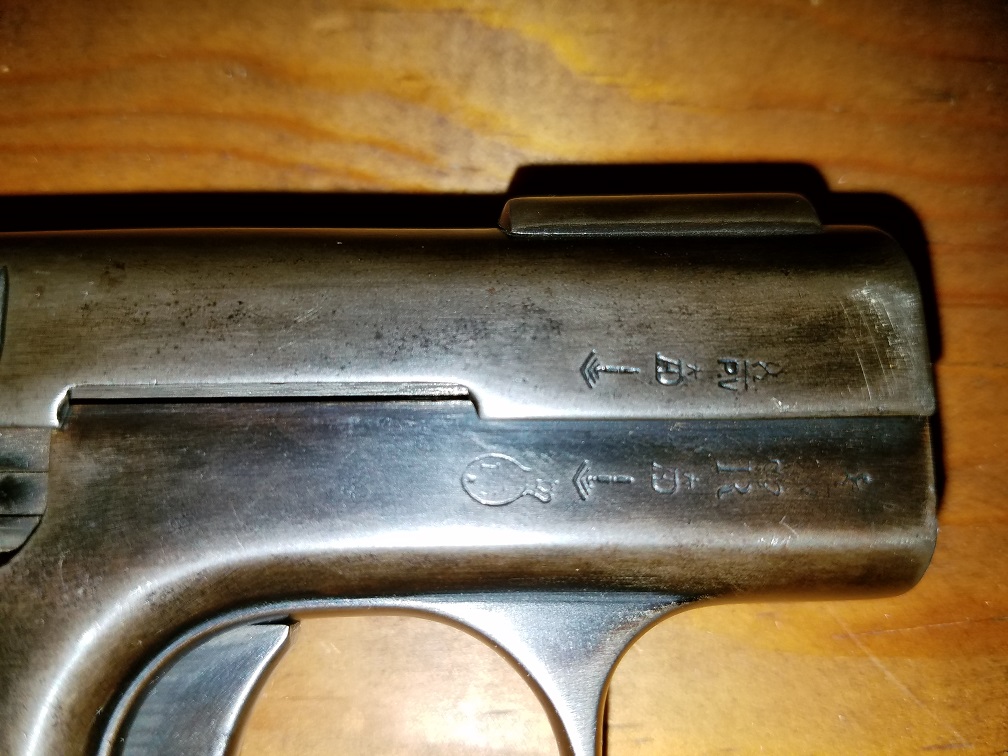 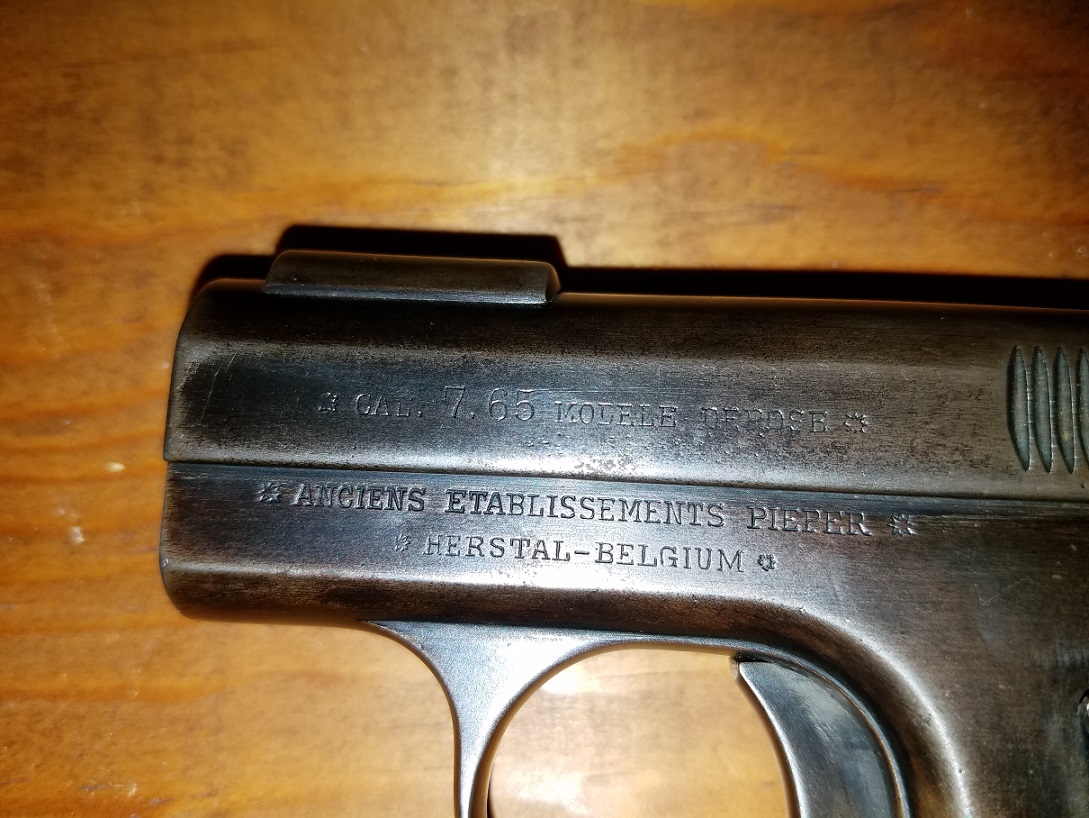 A very interesting pistol to say the least. The manufacturing quality is superb. The engineering design is also very interesting and clever. With the barrel below the recoil spring and tube, this lowers the barrel in the hand reducing the recoil impulse. But that creates other issues such as the way the hammer and sear interact. 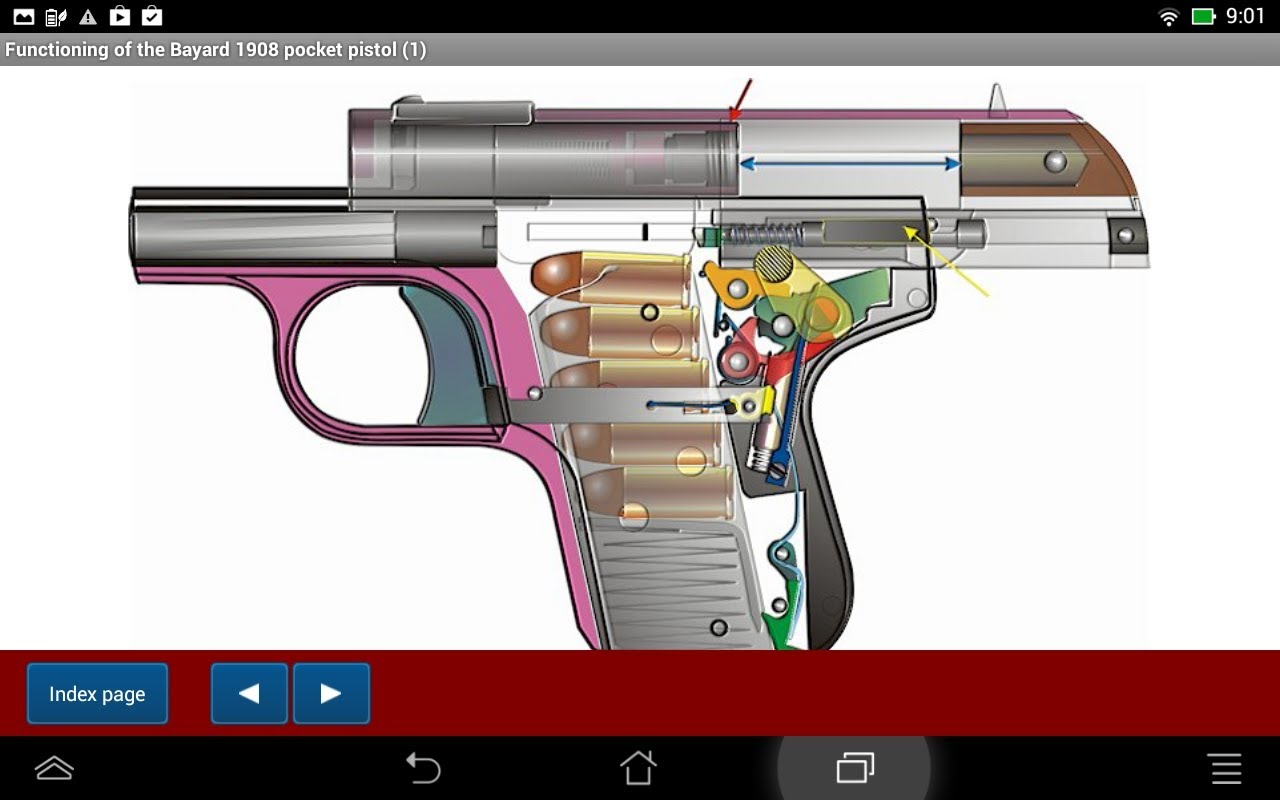 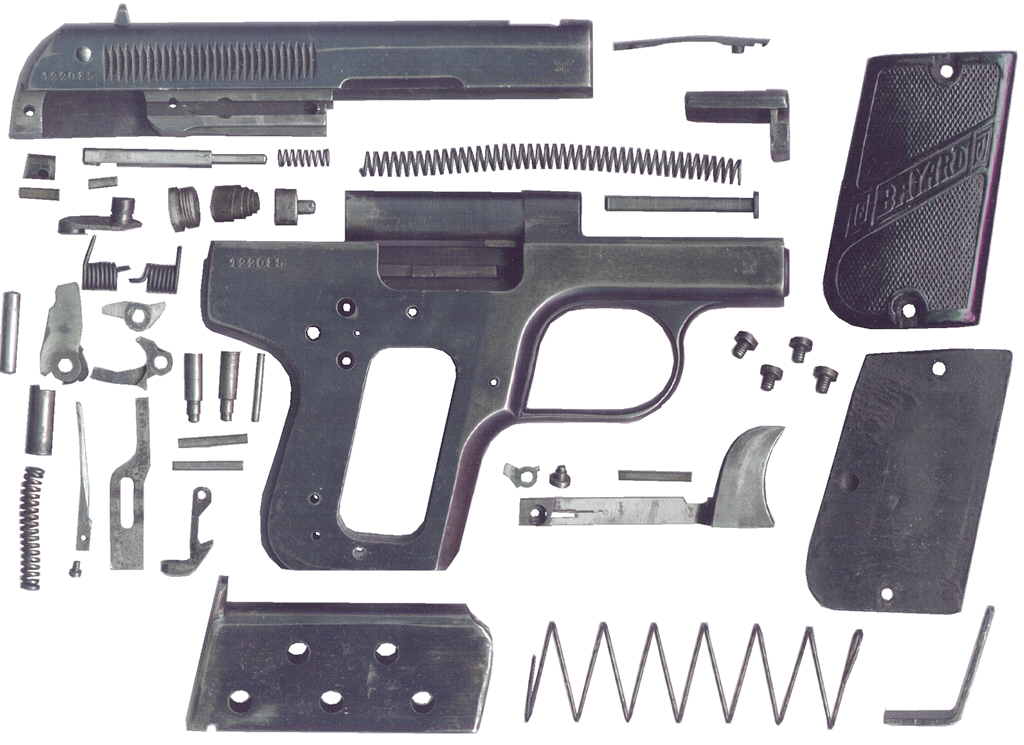 If anyone has any info on this I would welcome it. Hope you all enjoyed a look at this little beauty.

posted on Mar, 30 2017 @ 07:33 AM
link
a reply to: FauxMulder
OMGosh Faux thank you for taking the time to put this post together. That is a really neat piece of weaponry you have there. It was very neat to read about the history.


If anyone knows about proof marks please let me know. (pictures of proof marks will be below). I have read that if it has the German Imperial Eagle it is worth more and also all of the German ones were in 7.65 which this one is.

This first link has some great pictures of the proof marks.

Thank you for the links

Thanks! I'm glad you enjoyed it

HAHA! Definitely not. Dumba$$ is lucky he didn't blow his insides out.
edit on 30-3-2017 by FauxMulder because: (no reason given)

Thats a "cute" little curio eh? Have you shot it?

No I haven't shot it yet. I have ammo for it, I will give it a go sooner or later. Just dont want the thing to blow up in my hand

posted on Mar, 30 2017 @ 09:52 AM
link
Juts a critique from obseravtion. Belgian made (precison manufactured), a "pistol" as opposed to a revolver, newer in its day. Hand machined from forged steel, automatic, hammerless (no snagging while pulling it out), easily concealed in the pocket or hand. The penultimate belly gun; ready to go, easily employed, reliable, large enough calibre to inflict defensive harm at extreme close range.

What exactly is a belly gun? It is just what the word implies, a kind of hardware you jam against the other man's navel and trigger off a burst. It has to be done in a twinkling or else he is apt to take the gun away from you and that could be bad. Since the trick of the thing depends on speed, the pistol must be short and handy-short so that it comes out fast and lines up lethally and handy so that a man points it like he does his finger.

I would have thought that your local gunsmith could establish whether it is in working order in a safe, controlled environment?

Are you going to put it in the shop before you test it?

I've considered it but I have taken it apart myself and all seems to be in good condition. I don't think it was shot much.
edit on 30-3-2017 by FauxMulder because: (no reason given)

Are you going to do yourself a little field strip video and put it up here Faux?

The only reason I ask, is because I very much enjoy seeing the inner workings of objects like this, especially older firearms. There is a channel on YouTube called Forgotten Weapons that I am very much enjoying at the moment. That may seem odd to those who know my overwhelming preference for the blade over a gun, but I am also a fan of engineering and machinery, and some of the workmanship that went into the older weapons was staggering, especially considering the limitations of the tools used to create them. No CNC milling machinery back then, after all!

I too share that love of engineering and machinery. Its incredible what people were able to do in the past. I haven't heard of that channel but it sounds like I'll have a new one to subscribe to. If you like blades you should check out a channel called "The Green Beetle". This guy hand makes knives with every day objects like fishing hooks, scalpels, files, or wrenches. He uses a forge welder and a hammer / anvil.

I haven't thought about a video but I could. I would need to practice doing it a few times so I don't look like a fool on video

Knife made from a shot gun shell bird shot

I love the Green Beetle Channel. Walter Sorrels has a good channel for knife making too. Chandler Dickinson has a cool channel for forge work, and its interesting in a way that many other channels of that nature are not, because he is not a professional in the way that Walter Sorrels is. He is more of an experimentalist, and the results are sometimes great, and sometimes just really informative!

Check the Forgotten Weapons channel out though, for sure. If you like firearms, and you have an interest in old ones, seeing them stripped for a look at the guts, you cannot beat this channel. The fellow who makes the videos is clearly an avid collector of both firearms and knowledge about them, so the videos are really informative.

posted on Mar, 30 2017 @ 11:46 AM
link
Nice post!!! Very informative and interesting!!! I happened to have this page bookmarked on account of some sleuthing i had to do a few years ago.
It looks like you know everything wanted to know, but this is still a nice reference...

Awesome! That is exactly what I needed.

posted on Mar, 31 2017 @ 02:14 AM
link
I'd agree with TrueBrit in get someone to give it the once over who knows what they're doing and then a vice/long length of string just to be safe, you might want to look at lower power ammo so as not to put as much stress on it as well as if all you will do is use it at the range etc.